The aryl hydrocarbon receptor (AhR) is known for mediating the toxicity of environmental pollutants such as dioxins and numerous dioxin-like compounds, and is associated with the promotion of various malignancies, including lymphoma. The aryl hydrocarbon receptor repressor (AhRR), a ligand-independent, transcriptionally inactive AhR-like protein is known to repress AhR signaling through its ability to compete with the AhR for dimerization with the AhR nuclear translocator (ARNT). While AhRR effectively blocks AhR signaling, several aspects of the mechanism of AhRR’s functions are poorly understood, including suppression of inflammatory responses and its putative role as a tumor suppressor. In a transgenic mouse that overexpresses AhRR (AhRR Tg) we discovered that these mice suppress 2,3,7,8-tetrachlorodibenzo-p-dioxin (TCDD)- and inflammation-induced tumor growth after subcutaneous challenge of EL4 lymphoma cells. Using mouse embryonic fibroblasts (MEF) we found that AhRR overexpression suppresses the AhR-mediated anti-apoptotic response. The AhRR-mediated inhibition of apoptotic resistance was associated with a suppressed expression of interleukin (IL)-1β and cyclooxygenase (COX)-2, which was dependent on activation of protein kinase A (PKA) and the CAAT-enhancer-binding protein beta (C/EBPβ). These results provide mechanistic insights into the role of the AhRR to suppress inflammation and highlight the AhRR as a potential therapeutic target to suppress tumor growth. View Full-Text
Keywords: AhR; AhRR; carcinogenicity; C/EBPβ; cyclooxygenase 2; inflammation; interleukin 1; lymphoma; TCDD AhR; AhRR; carcinogenicity; C/EBPβ; cyclooxygenase 2; inflammation; interleukin 1; lymphoma; TCDD
►▼ Show Figures 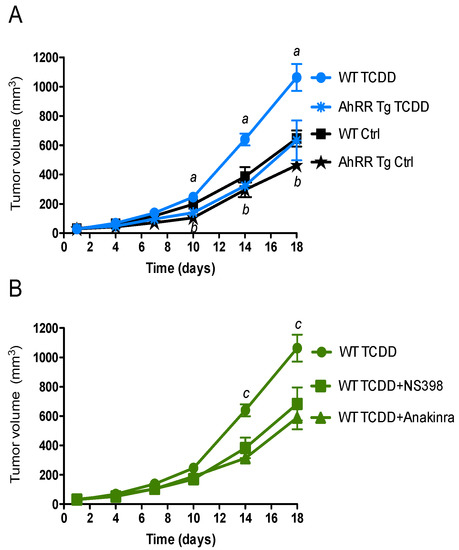