Chromogranin A in the Laboratory Diagnosis of Pheochromocytoma and Paraganglioma

This work discusses the clinical performance of chromogranin A (CGA), a commonly measured marker in neuroendocrine neoplasms, for the diagnosis of pheochromocytoma/paraganglioma (PPGL). Plasma CGA (cut-off value 150 µg/L) was determined by an immunoradiometric assay. Free metanephrine (cut-off value 100 ng/L) and normetanephrine (cut-off value 170 ng/L) were determined by radioimmunoassay. Blood samples were collected from PPGL patients preoperatively, one week, six months, one year and two years after adrenal gland surgery. The control patients not diagnosed with PPGL suffered from adrenal problems or from MEN2 and thyroid carcinoma. The clinical sensitivity in the PPGL group of patients (n = 71) based on CGA is 90% and is below the clinical sensitivity determined by metanephrines (97%). The clinical specificity based on all plasma CGA values after surgery (n = 98) is 99% and is the same for metanephrines assays. The clinical specificity of CGA in the control group (n = 85) was 92% or 99% using metanephrines tests. We can conclude that plasma CGA can serve as an appropriate complement to metanephrines assays in laboratory diagnosis of PPGL patients. CGA is elevated in PPGLs, as well as in other neuroendocrine or non-neuroendocrine neoplasia and under clinical conditions increasing adrenergic activity.
Keywords: chromogranin A; metanephrines; pheochromocytoma; paraganglioma chromogranin A; metanephrines; pheochromocytoma; paraganglioma

Included in the study were the group of PPGL patients and the control group without PPGL diagnosis. Patients with PCC or PGL consisted of 78 patients aged 49 ± 17 (18–78) years, 36 females aged 52 ± 18 (18–78) years, 42 males aged 48 ± 15 (20–76) years. PCC occurred in 68 patients, PGL in 10 patients. In the PCC group, mutations in the RET gene were found in seven patients, three were diagnosed with MEN2A and MTC, four had MEN2B and MTC. Mutations in the VHL gene were observed in five patients, in three patients were mutations in the NF1 gene, two patients had mutations in the MAX gene, one patient in the MET gene, and in 50 patients the mutations were not determined. In the PGL group, mutations in the SDHB gene were found in two patients, while mutation in the SDHD gene was observed in one patient. Mutations were not determined in seven patients.
A sampling of biological materials was performed preoperatively (2 ± 3 weeks before surgery) and about one week (1 ± 0.5 weeks), six months (30 ± 10 weeks), one year (54 ± 6 weeks) and two years (96 ± 22 weeks) after surgery. A blood basal sampling was performed 20 min after the introduction of cannula in supine position. Four collections (before surgery, one week, six months, one year after surgery) were conducted in 27 patients (25 PCC, 2 PGL); 19 blood samplings were from patients treated with proton pump inhibitors. Three collections (before surgery, one week, six months after surgery) were from seven PCC patients, in which four samplings were from patients treated with PPI and one patient suffered from chronic renal insufficiency (CRI). Three collections (before surgery, one week, one year after surgery) were from one PCC and one PGL patient, one sampling of PGL patient was treated with PPI. Two collections (before surgery, one week after surgery) were from six PCC patients and two PGL patients, three samplings were from patients treated with PPI, one PGL patient had a recurrence of the disease (REC). Two collections were in one patient (before surgery, six months after surgery), two collections (before surgery, one year after surgery) were from three PCC patients. Two collections were in 10 PCC patients and two PGL patients (before surgery, two years after surgery), two PCC patients had REC of the disease. One collection was in 15 PCC patients and three PGL patients before surgery.
The control group consisted of 86 patients aged 53 ± 19 (7–84) years, 57 females and 29 males without diagnosis of PCC or PGL. These patients, however, had adrenal problems, or were diagnosed with MEN syndrome and with medullary, papillary or follicular thyroid carcinoma. The rest of the control group suffered from thyroid diseases (goiter, thyroiditis, thyroid nodules). Forty six patients had adrenocortical adenoma, two of whom suffered from hypertension; two patients had serious cardiovascular problems, one adenoma was accompanied by MTC and FTC, one adenoma was accompanied by PTC. Nine patients suffered from hypertension, one of these patients had severe chronic renal insufficiency. Nine patients had MEN2A syndrome, which was associated with MTC in seven patients. MTC was detected in addition to MEN2B in three patients. Ten patients suffered from MTC, one of whom was also diagnosed with PTC. Four other patients were found to have PTC. Five patients had thyroid disease (one goiter, one thyroiditis, and three thyroid nodules). The study was approved by the Internal Grant Agency, Ministry of Health of the Czech Republic, grant No. NT/12336-4 and local Ethical Committee, which also examined and adopted the informed consent of the patient.

CGA was determined in the EDTA-plasma using a commercially available a solid-phase two-site immunoradiometric assay with primary immobilized monoclonal antibodies and secondary radioiodinated monoclonal antibodies, both directed against sterically remote sites on the CGA molecule (manufacturer Cisbio Bioassays, Codolet, France; code CGA-RIACT). The cut-off value of CGA in the EDTA plasma 150 µg/L was determined on the basis of our results and information from the Cisbio company that 97% of healthy persons (n = 60) had CGA below 97 µg/L with a maximum concentration of 146 µg/L.
Free MN and NMN were determined in human EDTA plasma by competitive radioimmunoassay using a MetCombi Plasma RIA kit (IBL International GmbH, Hamburg, Germany, code RE29111). The cut-off values were 100 ng/L for metanephrine and 170 ng/L for normetanephrine.

We can conclude that plasma CGA determined by immunoassay, which is simple without the necessity of special laboratory equipment, is an effective marker of PPGLs and can serve as an appropriate complement to MN and NMN assays in laboratory diagnosis of PPGL patients. Based on 90% clinical sensitivity, CGA can provide additional information to metanephrines, but absence of elevated CGA should not be relied on to rule out PPGL. In all cases of PPGL patients under investigation the combination of metanephrines and CGA gave 100% results of clinical sensitivity. Plasma CGA also exerts an association to PASS score, tumor mass and tumor volume. 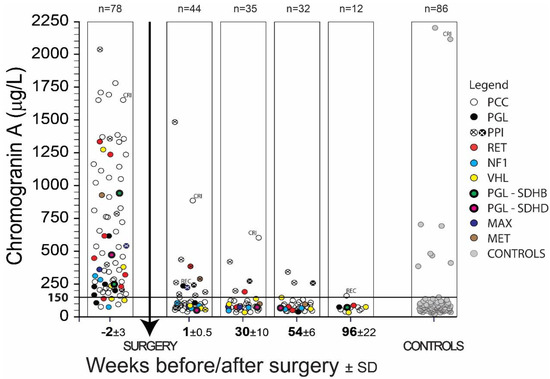 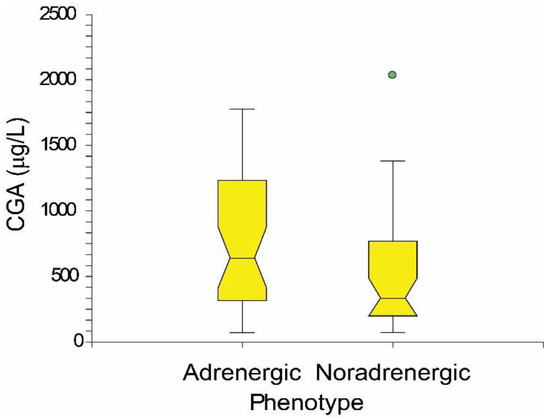