TGF-β Signaling in Cancer: Control by Negative Regulators and Crosstalk with Proinflammatory and Fibrogenic Pathways

Hepatocellular carcinoma (HCC) is one of the most prevalent and deadly cancers worldwide. Therefore, current global research focuses on molecular tools for early diagnosis of HCC, which can lead to effective treatment at an early stage. Perilipin 5 (PLIN5) has been studied as one of the main proteins of the perilipin family, whose role is to maintain lipid homeostasis by inhibiting lipolysis. In this study, we show for the first time that PLIN5 is strongly expressed in tumors of human patients with HCC as well as in mouse livers, in which HCC was genetically or experimentally induced by treatment with the genotoxic agent diethylnitrosamine. Moreover, the secreted acute phase glycoprotein Lipocalin 2 (LCN2) established as a biomarker of acute kidney injury, is also proven to indicate liver injury with upregulated expression in numerous cases of hepatic damage, including steatohepatitis. LCN2 has been studied in various cancers, and it has been assigned roles in multiple cellular processes such as the suppression of the invasion of HCC cells and their metastatic abilities. The presence of this protein in blood and urine, in combination with the presence of -Fetoprotein (AFP), is hypothesized to serve as a biomarker of early stages of HCC. In the current study, we show in humans and mice that LCN2 is secreted into the serum from liver cancer tissue. We also show that AFP-positive hepatocytes represent the main source for the massive expression of LCN2 in tumoral tissue. Thus, the strong presence of PLIN5 and LCN2 in HCC and understanding their roles could establish them as markers for diagnosis or as treatment targets against HCC. View Full-Text
Keywords: HCC; LCN2; PLIN5; AFP; cancer; liver HCC; LCN2; PLIN5; AFP; cancer; liver
►▼ Show Figures 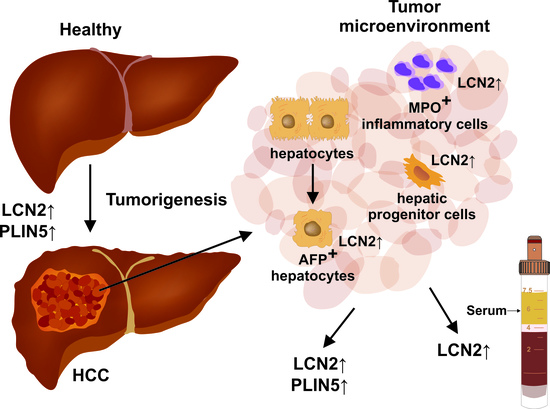