Non-Coding RNAs in Glioma
Next Article in Special Issue

The standard treatment for glioblastoma multiforme (GBM) is surgery followed by chemo/radiotherapy. A major limitation on patient improvement is the high resistance of tumors to drug treatment, likely responsible for their subsequent recurrence and rapid progression. Therefore, alternatives to the standard therapy are necessary. The aim of the present study was to evaluate whether mifepristone, an antihormonal agent, has a synergistic effect with temozolomide (used in standard therapy for gliomas). Whereas the mechanism of temozolomide involves damage to tumor DNA leading to apoptosis, tumor resistance is associated with DNA damage repair through the O6-methylguanine-DNA-methyltransferase (MGMT) enzyme. Temozolomide/mifepristone treatment, herein examined in Wistar rats after orthotopically implanting C6 glioma cells, markedly reduced proliferation. This was evidenced by a decreased level of the following parameters: a proliferation marker (Ki-67), a tumor growth marker (18F-fluorothymidine uptake, determined by PET/CT images), and the MGMT enzyme. Increased apoptosis was detected by the relative expression of related proteins, (e.g. Bcl-2 (B-cell lymphoma 2), Bax (bcl-2-like protein 4) and caspase-3). Thus, greater apoptosis of tumor cells caused by their diminished capacity to repair DNA probably contributed significantly to the enhanced activity of temozolomide. The results suggest that mifepristone could possibly act as a chemo-sensitizing agent for temozolomide during chemotherapy for GBM. View Full-Text
Keywords: glioblastoma; temozolomide; mifepristone; MGMT; drug resistance; apoptosis glioblastoma; temozolomide; mifepristone; MGMT; drug resistance; apoptosis
►▼ Show Figures 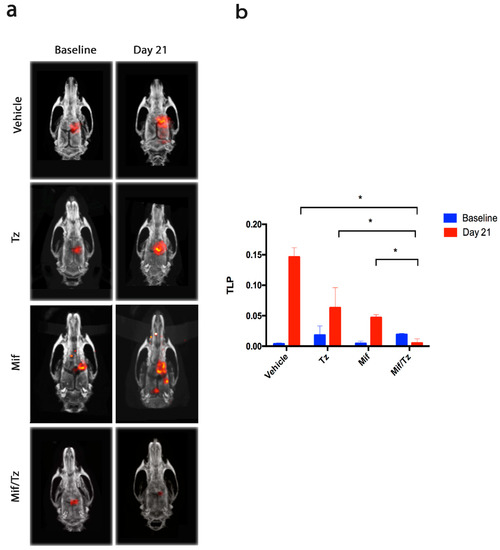