Current Advances in Aptamers for Cancer Diagnosis and Therapy

The epithelial cell adhesion molecule (EpCAM), or CD326, was one of the first cancer associated biomarkers to be discovered. In the last forty years, this biomarker has been investigated for use in personalized cancer therapy, with the first monoclonal antibody, edrecolomab, being trialled in humans more than thirty years ago. Since then, several other monoclonal antibodies have been raised to EpCAM and tested in clinical trials. However, while monoclonal antibody therapy has been investigated against EpCAM for almost 40 years as primary or adjuvant therapy, it has not shown as much promise as initially heralded. In this review, we look at the reasons why and consider alternative targeting options, such as aptamers, to turn this almost ubiquitously expressed epithelial cancer biomarker into a viable target for future personalized therapy. View Full-Text
Keywords: antibody; aptamer; cancer; EpCAM; immunotherapy; therapeutics antibody; aptamer; cancer; EpCAM; immunotherapy; therapeutics
►▼ Show Figures 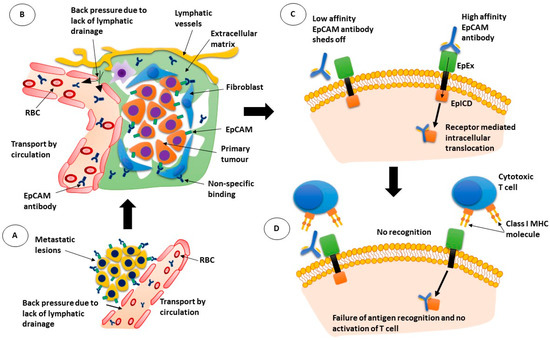