Preparation of an Acridinium Ester-Labeled Antibody and Its Application in GoldMag Nanoparticle-Based, Ultrasensitive Chemiluminescence Immunoassay for the Detection of Human Epididymis Protein 4
Previous Article in Journal

:
We report on the radio frequency (RF) sputtering of c-axis oriented ZnO thin films on top of epitaxial 3C-SiC-on-Si (111) substrates, which were then subjected to post-annealing treatment at 400, 600 and 800 °C. Grazing incident X-ray Diffraction (XRD) data show that the Full Width Half Maximum (FWHM) values for O2/Ar ratios between 30% and 60% are consistent, with a mean of 0.325° and a standard deviation of 0.03°. This is largely attributed to the smaller lattice mismatch of 5% between the ZnO (002) and SiC (111) films. The quality of the ZnO films deteriorated at the post-annealing treatment of 800 °C, as demonstrated by the increasing value of FWHM diffraction peaks, the reducing value of the peak intensity, the reducing percentage of (002) oriented area under the curve, and the increasing value of biaxial stress. We propose a simple growth model to explain the result.
Keywords:
ZnO; silicon carbide; radio frequency (RF) sputtering; annealing

Zinc oxide (ZnO) is a group II-IV semiconductors, which is suitable for a wide range of scientific and technological applications. It has a wide band gap of 3.3 eV and an excitation binding energy of 60 meV at room temperature [1]. ZnO can potentially be used in solar cells, gas sensors and optical wave guides because of its excellent electrical and optoelectronic properties [2]. It can also be used in the fabrication of surface acoustic wave (SAW) devices, piezoelectric transducers and film bulk acoustic resonators [3]. ZnO is commonly deposited via a sputtering system because this requires a relatively simple apparatus, low substrate temperature, high deposition rate, good surface flatness, high transparency and dense layer formation [4].
ZnO thin films are normally deposited on silicon (Si) substrates because of the ease in fabrication and the low cost per unit surface area. However, the large difference of 39% in lattice mismatch and 68% in thermal expansion coefficients (CTE) generates cracks, dislocations and stresses in deposited films that ultimately results in the deterioration of ZnO crystal quality [5]. Therefore, ZnO films have been deposited on various substrates with lower CTE and lattice mismatches e.g., α-Al2O3 [6], GaN [7], AlN [8], 3C-SiC [9], 4H-SiC [10] and 6H-SiC [11]. There were two groups that have performed radio frequency (RF) sputtering of ZnO (002) on top of 3C-SiC-on-Si substrates, similar to our work. Sha et al. compared the Full Wave Half Maximum (FWHM) values of the diffraction peaks of ZnO (002) that were RF sputtered on top of Si (111) and 3C-SiC-on-Si (111) substrates [12]. They observed FWHM values of 0.65° to 0.55° on both substrates, respectively. They further annealed the samples at 1000 °C, and demonstrated the reduction in the FWHM values of both samples down to 0.19° and 0.25°, respectively. However, all of their samples were polycrystalline with no preferred orientation. Phan et al. compared the crystal quality of ZnO (002) deposited on top of 3C-SiC (111)/Si (100) substrates using RF sputtering and sol-gel [5]. The 3C-SiC buffer layer was a polycrystalline with (111) orientation. They observed a dominant (002) orientation using RF sputtering. They reported FWHM diffraction peak values of 0.2107° and 0.3498°, respectively, for both methods at the annealing temperature of 800 °C. In a subsequent work from the same group [13], they fabricated ZnO-based SAW resonators on top of Si (100) and 3C-SiC/Si (100) substrates. They reported improved insertion loss and temperature stability of the resonator made on top of the 3C-SiC (111) buffer layer. Both Sha et al. and Phan et al. demonstrated that ZnO thin film with dominant (002) orientation could be sputtered on top of Si substrate with a polycrystalline 3C-SiC buffer layer.
In this paper, we performed RF sputtering to obtain c-axis oriented ZnO films on top of Si (111) substrates with 3C-SiC (111) epitaxial buffer layer. Specifically, we studied the effect of varying the O2/Ar ratios on the ZnO (002) crystal orientation, and found that the FWHM values are consistent between 30% to 60% O2/Ar ratios. We illustrated the effect of 5% lattice mismatch between ZnO (002) and 3C-SiC (111) buffer layer that contributed to this interesting result. We further subjected the samples to post-annealing treatment at three temperatures, and proposed the growth model for the optimized annealing temperature of 600 °C. It must be noted that the samples for this article were batch-fabricated and batch-tested together with ZnO (002) films on top of 3C-SiC-on-Si (100) substrates. The results for the latter were recently reported in [14].

The deposition of ZnO films was performed on top of a 3C-SiC-on-Si substrate using an RF sputterer (Denton Vacuum, Moorestown, NJ, USA) operating at 450 W. It is a common sputtering technique to employ the maximum available power to obtain the highest deposition rate and best crystal quality. Since the maximum power of the RF sputterer is 500 W, we chose 450 W with a 50 W gap from the maximum power to avoid damaging the equipment. Prior to this work, the 3C-SiC (111) thin film with a thickness of 300 nm was epitaxially grown on top of Si (111) wafer with a diameter of 150 mm using a custom-made hot-wall horizontal low pressure chemical vapour deposition (LPCVD) system at Queensland Micro- and Nanotechnology Centre of Griffith University [15]. Our center has been producing epitaxial 3C-SiC/Si wafers of different 3C-SiC thicknesses (ranging from 50 nm to 2 µm) and wafer sizes (ranging from 2 to 12 inches in diameter). The 300-nm thick 3C-SiC layer was arbitrarily chosen during the time of this experiment. In the first experiment, the samples were cut in a size of 15 × 15 mm2 using a wafer dicer (Disco Corp., Tokyo, Japan) and cleaned via the standard piranha cleaning process to remove organic substances. The sputtering system was turbo-pumped for 15 min to the base pressure of 5 × 10−5 Torr to reduce residual gasses in the chamber and hence eliminate unwanted reactions. The sputtering pressure of 4 mTorr was used for all the depositions. The substrate temperature of 200 °C was chosen to follow industry practice. The Zinc (Zn) target of 100 mm in diameter and 6.35 mm in thickness with 99.999% purity was employed. Argon gas was pumped to the chamber for 6 min with the substrate’s shutter closed in order to clean the Zn target from previous reactions. The distance from the target to the substrate was 76 mm, which is a default distance of the RF sputterer. The O2/Ar ratio was increased from 30% to 60% in a step of 10% with a total gas flow of 34 sccm to evaluate the effect of O2 concentration on the crystal orientation. The poison mode for the ZnO was determined by measuring the conductivity of the films, since ZnO is highly insulative. The deposition time was 30 min. After the deposition, it took 90 min for the substrate temperature to cool down to 50 °C before the samples were taken out of the chamber. The deposition rate was determined by measuring the thickness of the ZnO films using a step profiler (Dektak stylus profilometer, Bruker, Billerica, MA, USA) over the total deposition time.
The second experiment was to subject the samples to post-annealing treatment. This step was needed to improve the crystal quality of ZnO (002) as demonstrated by the systematic studies of annealing ZnO films on Si substrates conducted by Fang et al. [16]. Our samples were placed into the annealing chamber (custom-made glass tube). Nitrogen gas was pumped into the chamber with a flow of 1700 cc/min. We annealed our samples at three different temperatures i.e., 400, 600 and 800 °C. The samples were then cooled down to 50 °C before removing them from the chamber. The cooling rate is non-linear and the duration depends on the highest temperature in the chamber. For the annealing temperature of 400 °C, it took 60 min to cool down to 50 °C. Therefore, the average cooling rate is 6 °C/min.
The deposited ZnO films were characterized by the following parameters (equipment): X-ray diffraction (D8 Advance X-Ray diffraction tool using monochromatorized Cu Kα1 beam with λ = 1.5405980 Å, Bruker), surface roughness (tapping-mode Cypher Atomic Force Microscopy with etalon cantilever, Asylum Research, Santa Barbara, CA, USA) and film thickness (Dektak stylus profilometer, Bruker).

We have demonstrated the RF sputtering of c-axis oriented ZnO thin films on top of epitaxial 3C-SiC-on-Si (111) substrates. Four key results are highlighted. First, the value of the FWHM of the (002) diffraction peak was reduced by a factor of 50% after post-annealing, illustrating its effectiveness. Second, after the post-annealing treatment, the FWHM values of ZnO (002) for the samples from 30% to 60% O2/Ar ratios showed minimal changes, with the mean of 0.325° and standard deviation of 0.03°. Third, the post-annealing temperature of 600 °C was found to be the most optimized range for the ZnO (002) deposition. This is supported by the data from the extracted FWHM and the value of the biaxial stress. We have also proposed a growth model to explain the effect of the post-annealing treatment on the crystal quality of the ZnO films. Fourth, the surface roughness of the ZnO film increased after annealing due to the coalescence of small crystallites. This observation is supported by the AFM measurement and is corroborated by the calculation of the grain size.

This work is supported by Queensland Micro- and Nanotechnology Centre (QMNC) and Griffith School of Engineering. This work was performed in part at the Queensland node of the Australian National Fabrication Facility, a company established under the National Collaborative Research Infrastructure Strategy to provide nano and microfabrication facilities for Australia’s researchers. The authors would like to acknowledge Zailan Mohd Yusof of Universiti Kebangsaan Malaysia for the XRD measurements. 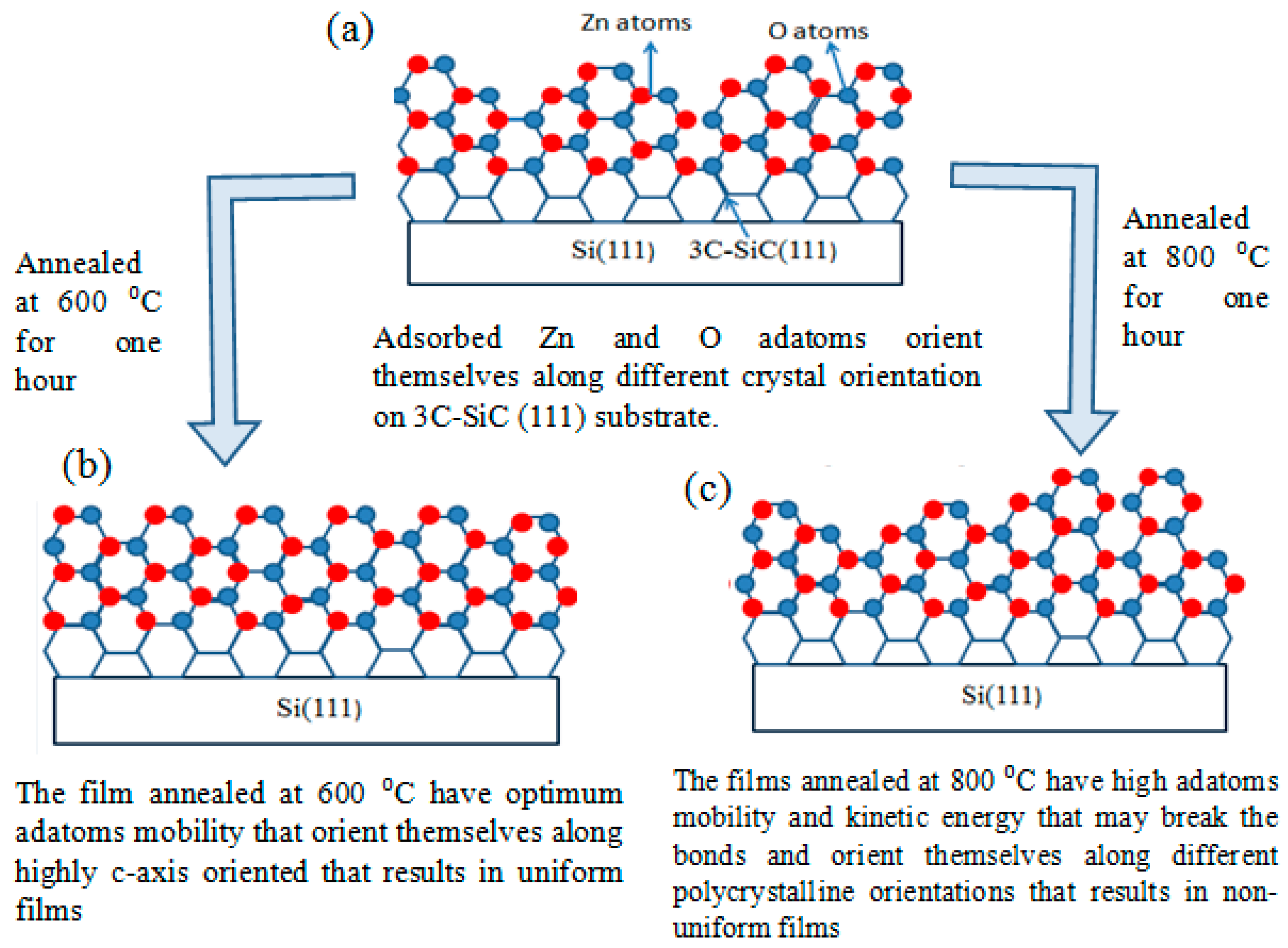 Table 1. Summary of data for ZnO (002).
Table 1. Summary of data for ZnO (002).
© 2017 by the authors. Licensee MDPI, Basel, Switzerland. This article is an open access article distributed under the terms and conditions of the Creative Commons Attribution (CC BY) license (http://creativecommons.org/licenses/by/4.0/).
We use cookies on our website to ensure you get the best experience. Read more about our cookies here.
Accept
We have just recently launched a new version of our website. Help us to further improve by taking part in this short 5 minute survey here. here.
Never show this again