:
Single point incremental forming is used for rapid prototyping of sheet metal parts. This forming technology was applied to the fabrication of thin shell micropyramids of aluminum, stainless steel, and titanium foils. A single point tool used had a tip radius of 0.1 mm or 0.01 mm. An ultrasonic spindle with axial vibration was implemented for improving the shape accuracy of micropyramids formed on 5–12 micrometers-thick aluminum, stainless steel, and titanium foils. The formability was also investigated by comparing the forming limits of micropyramids of aluminum foil formed with and without ultrasonic vibration. The shapes of pyramids incrementally formed were truncated pyramids, twisted pyramids, stepwise pyramids, and star pyramids about 1 mm in size. A much smaller truncated pyramid was formed only for titanium foil for qualitative investigation of the size reduction on forming accuracy. It was found that the ultrasonic vibration improved the shape accuracy of the formed pyramids. In addition, laser heating increased the forming limit of aluminum foil and it is more effective when both the ultrasonic vibration and laser heating are applied.
Keywords:
incremental microforming; ultrasonic spindle; shin shell micropyramid; metallic foil; forming limit; shape accuracy

Functional miniaturized structures of various materials will be widely applied to sensors, filters, biotesters, bioscaffold, etc. in the near future. For this purpose, efficient microprocessing technologies with high accuracy and high surface quality are required to meet the demand for their production. Microcutting [1], micro-laser-machining [2], micro-electric discharge machining [3,4], and microforming [5] have been intensively studied, and recently, micro-additive-manufacturing combined with other microprocessing [6] is more and more important in tailor-made manufacturing or high-mix low-volume production of complex parts.
Incremental forming with a single point tool is regarded as a rapid prototyping process for sheet metal forming because no die is needed and parts of free-form surfaces can be fabricated incrementally [7]. The forming limit is much larger for this technology than for other forming methods [8]. Therefore, this technology can be applied to the fabrication of various shapes of sheet metal parts [9]. It also can be applied to microforming of the miniature shell structures of aluminium, gold, and stainless steel foils [10,11,12,13,14]. The preparation of backing plates of various shapes, which are used as a support in ordinary incremental forming, is not easy for incremental forming of microparts. For this reason, no backing plate is needed for the developed microforming technologies. However, the accuracy of microshell structures formed without using a backing plate is not so high, and thus, it should be improved without reducing the forming limit.
In this paper, ultrasonic assisted incremental microforming technology has been developed using an ultrasonic spindle for improving the accuracy of microshell structures of aluminium, stainless steel, and titanium foils. Laser heating was also applied to the ultrasonic assisted incremental microforming for softening and increasing formability of aluminum foil under deformation. The forming limit and forming accuracy of micropyramids were investigated under the conditions of with and without ultrasonic vibration and laser heating. Only for a foil of titanium—a difficult-to-work material—a micropyramid in a size of 283 μm was also formed under the conditions of ultrasonic vibration for qualitatively investigating the size reduction on forming accuracy.

An incremental microforming machine with an ultrasonic spindle is shown in Figure 1. It is placed on a vibration-free table for insulating external disturbances. It is composed of an x-y table, z stage, ultrasonic spindle with a Langevin ultrasonic transducer, forming tool, blank holder, base, column, and laser source and its optical system. An ordinary motor spindle used in the original and improved forming machines [10,11,12,13] has been replaced with an ultrasonic spindle and laser source and its optical system has been newly installed. The ultrasonic spindle causes vibration in the axial direction of the spindle. The vibration frequency is 42.5 kHz and its amplitude is set to be 0.5 μm, the minimum amplitude of the spindle. The x-y table and z-stage are controlled with a personal computer numerically. Their resolutions of motion are 0.01 μm, which is small enough to fabricate a shell structure of the order of one millimeter.
Aluminum foil of type 8021 used for the experiments is 6.5 and 12 μm-thick, while stainless steel foil of type 304 is 8 μm-thick and titanium foil is 5 μm-thick. The 8021 foil has a chemical composition listed in Table 1 and a crystal grain size of 5–10 μm [15]. The elongation of metallic foils decreases with decreasing thickness. It is about five percent for the aluminum foils [15] and about one percent for stainless foil [16]. A blank sheet is put on matte side up between the tensioner and O-ring, and then, it was clamped in a blank holder as shown in Figure 2. The holder can apply an appropriate size of tension to a blank by adjusting the sizes of a tensioner and O-ring [10,11,12]. This method for applying tension to a blank was also adopted in reference [14]. As described elsewhere [10,11,12] in details, no backing plate supporting a blank is used because miniaturization of a backing plate is not easy.
A single point forming tool of ultra-fine grain cemented carbide with a tip radius of R = 100 μm or 10 μm is used in this study (Figure 3). Before starting microforming, z-position of the top surface of a blank was determined accurately by detecting the contact between the tool and blank. n-propyl alcohol is used as a lubricant for avoiding adhesion and abrasion between the forming tool and blank. High speed rotation of the tool generates the hydrodynamic pressure between the rotating tool and blank being formed. Under this condition, the alcohol may penetrate into the interface between them if the contact stress is low.
Incremental microforming process of a triangular pyramid, for example, is shown in Figure 4, where D is the diameter of a circumscribed circle of a base of a pyramid, α is a half apex angle defined as an angle between a lateral edge and a vertical line through an apex, θ is a half apex angle defined as an angle between a triangular lateral face and the vertical line, t is the thickness of a blank, ω is the tool rotational speed, and Δz is the axial feed per a planar tool path. The side length of a triangular tool path on a plane shrinks step by step. The tool rotational speed ω and table speed vt were set to be 5000 min−1 and 200 μm/s, respectively, except that ω = 10,000 min−1 and vt = 150 μm/s for a titanium micropyramid of D = 283 μm. The axial feed Δz was 5 and 12 μm for 6.5 and 12 μm-thick aluminum foils, respectively, 5 μm for 8 μm-thick stainless steel foil, and 2 and 1 μm for titanium pyramids of D = 1.41 mm and D = 283 μm, respectively. When the forming was conducted under the condition of laser heating, the forming area of the foil was irradiated from the top of a pyramid (from the below of a pyramid) using a semiconductor laser of 130 mW; the laser beam was reflected using a prism under the blank holder.
The triangular lateral faces of a square pyramid elongates from h0 to h1 by single point incremental forming as shown in Figure 5. Its elongation e in percent is given by
e = 100(h1/h0 − 1) = 100(cosec θ − 1)
while the logarithmic strain ε corresponding to the elongation e is
ε = ln(h1/h0) = ln(cosec θ)
Both the elongation and strain increase with decreasing half apex angle. Equations (1) and (2) are applied for truncated pyramids with the same half apex angle θ.

The authors would like to extend their thanks to cutting tool manufacturers, OSG Corporation and NS Tool Co., Ltd. for the fabrication of microforming tools used in this study. This study is partly based on projects supported by Amada Foundation (AF-2014023) and JSPS Grant-in-Aids for Challenging Exploratory Research (24656097, 2012), Japan. These contributions are gratefully acknowledged. 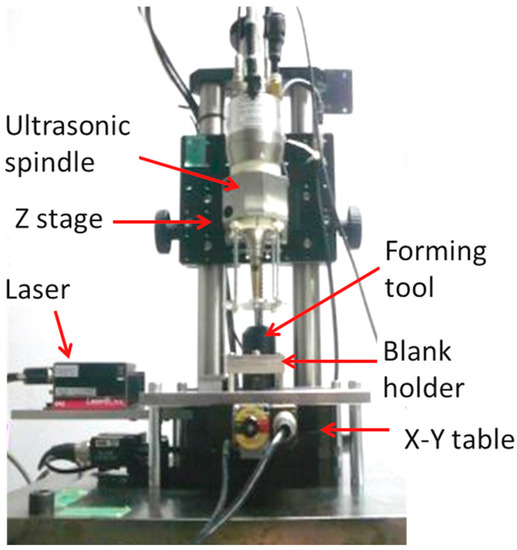 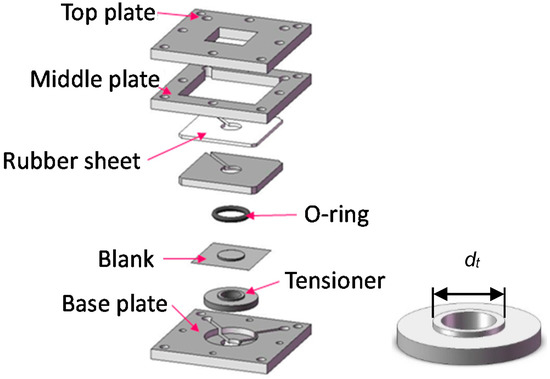 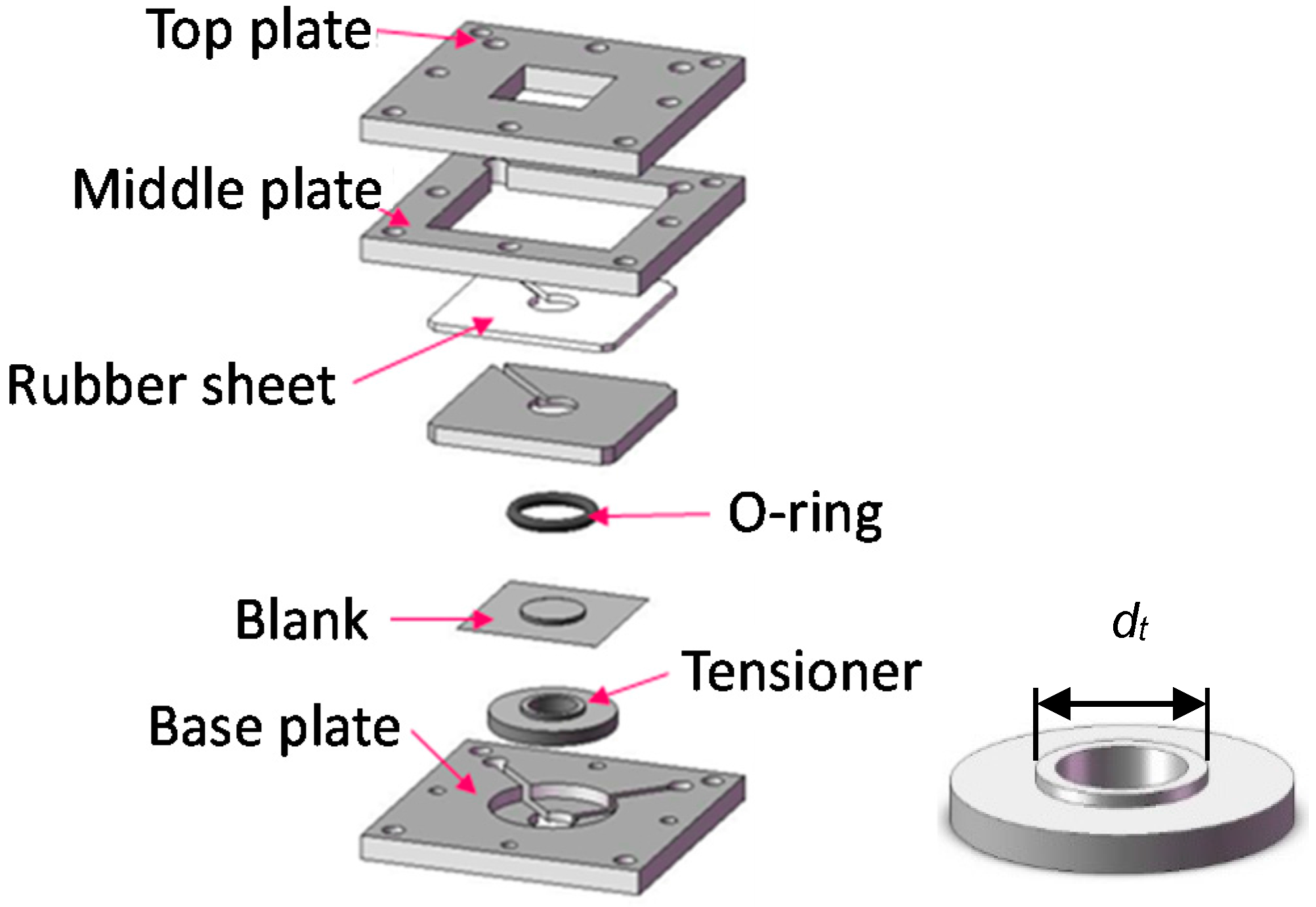 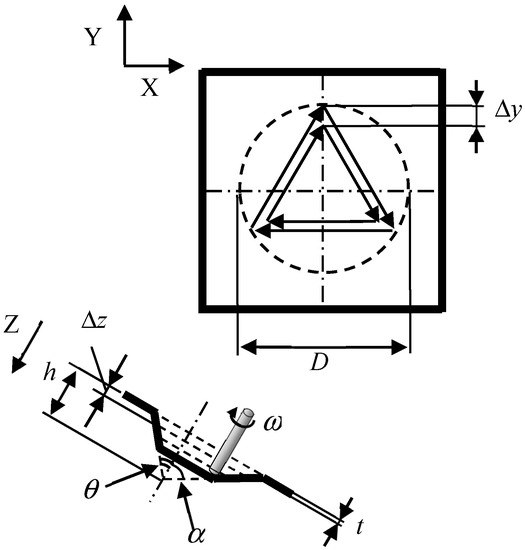 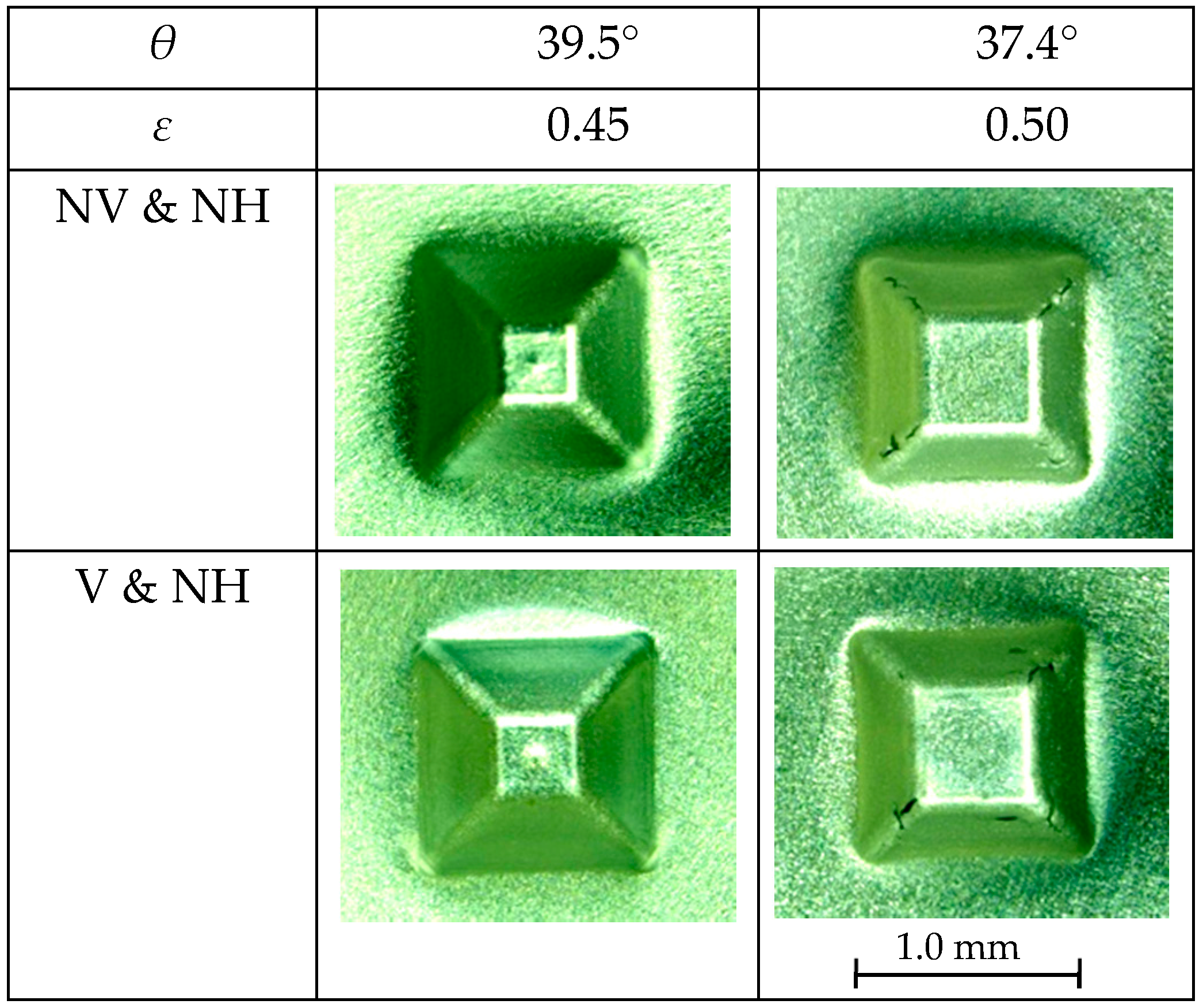 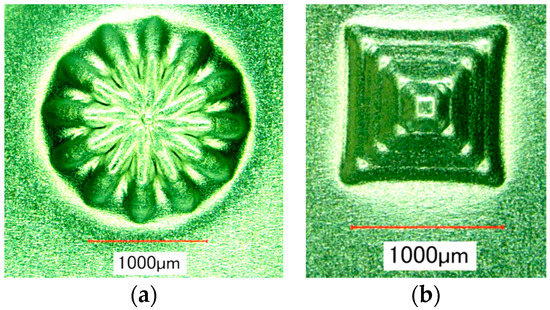 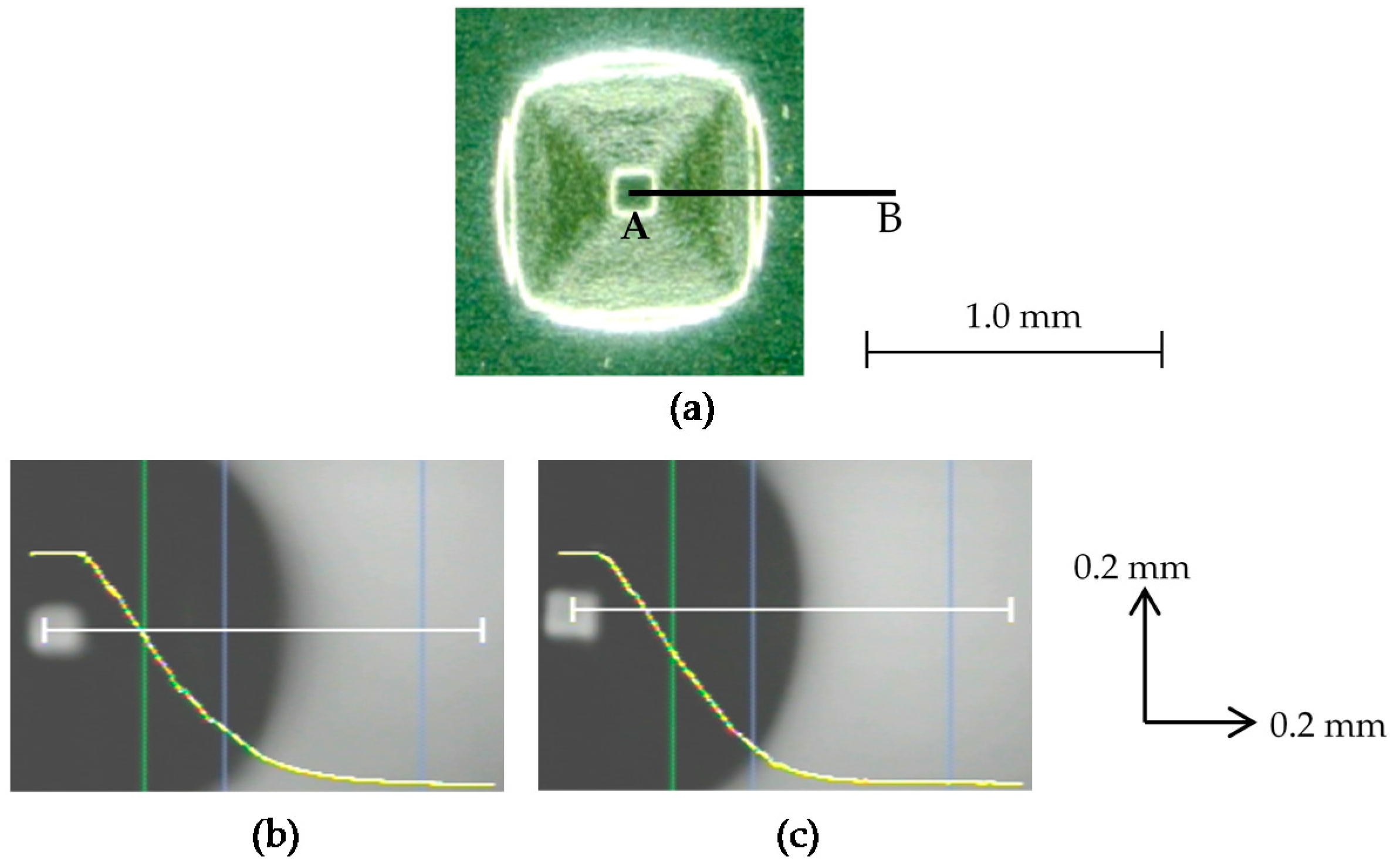 Table 1. Chemical composition of 8021 aluminum foil [wt %].
Table 1. Chemical composition of 8021 aluminum foil [wt %].
© 2017 by the authors. Licensee MDPI, Basel, Switzerland. This article is an open access article distributed under the terms and conditions of the Creative Commons Attribution (CC BY) license (http://creativecommons.org/licenses/by/4.0/).
We use cookies on our website to ensure you get the best experience. Read more about our cookies here.
Accept
We have just recently launched a new version of our website. Help us to further improve by taking part in this short 5 minute survey here. here.
Never show this again