We propose a simple optical measurement method for the simultaneous sensing of turbidity and chlorophyll a concentration of the lake water. Basically, we obtain these two quantities with a single measurement setup by measuring the output light intensity, which is transmitted through the sample water. However, the physical origin of the output light to be detected is different when turbidity and chlorophyll a concentration measurements are taken. In the case of turbidity sensing, we detect the scattered light intensity caused from the suspended tiny pollutant particles in the water. In other words, the stronger the scattered light intensity is, the higher the degree of pollution will be. On the other hand, in the case of chlorophyll a concentration sensing, we detect the fluorescent light intensity emitted from chlorophyll a molecules. Chlorophyll a molecules emit fluorescence with a wavelength of around 685 nm when an excitation with a wavelength of around 450 nm is applied [9,10]. If the suspended aquatic phytoplankton is rich, then chlorophyll a concentration is high and the fluorescence intensity becomes strong.
A schematic diagram of the optical measurement setup is shown in Figure 1. In the optical measurement setup, we utilized low cost LEDs and photodiode (PD) as an incident light source and a detector of the transmitted light intensity, respectively. The small water sample bottle (diameter; 24 mm, height including lid; 52 mm) is put into the socket and fixed. The socket was fabricated by a 3D printing technique. As shown in Figure 1, in the socket, we prepared 5 holes for 2 LEDs and 3 PDs to investigate an optimal measurement position. However, generally, we use 2 LEDs such as a red and a blue LED. These 2 LEDs and 1 PD are sufficient to measure two quantities in real time.
In the experiment, we used the red LED with a typical wavelength of 624 nm (OS5RKA3131A, OptoSupply, Hong Kong, China) and the blue LED with a typical wavelength of 470 nm (OSB56A3131A, OptoSupply) as incident light for turbidity sensing and an excitation light for chlorophyll a fluorescence, respectively. The PD (S7183, Hamamatsu Photonics, Hamamatsu, Japan) with a spectral response range of 300–1000 nm was adopted. The diameter of the LEDs, and the area including the burr of the PD are 3 mm and 4.3 × 4.6 mm2, respectively.
An equivalent circuit diagram of our optical measurement setup is shown in Figure 2. The power supply voltage (Vcc), the current control resistor (R1) for the LEDs, and the bias resistor (R2) for photovoltage measurement are 5 V, 0.984 kΩ, and 9.89 kΩ, respectively. In the experiment, a socket with the sample is placed in a box to prevent the influence of environmental light. A view of the experiment is shown in Figure 3. The measurement system is assembled based on the equivalent circuit shown in Figure 2. Moreover, in the experiment, we performed turbidity and chlorophyll a concentration sensing experiments individually to demonstrate feasibility.

We performed the turbidity and chlorophyll a concentration sensing experiments with standard samples for calibration and the environmental water samples to demonstrate the feasibility as follows, before performing the integration of two sensors into a microfluidic pH sensor.

The authors gratefully acknowledge the financial support provided to this study by the Tottori prefecture research fund for the promotion of environmental academic research. 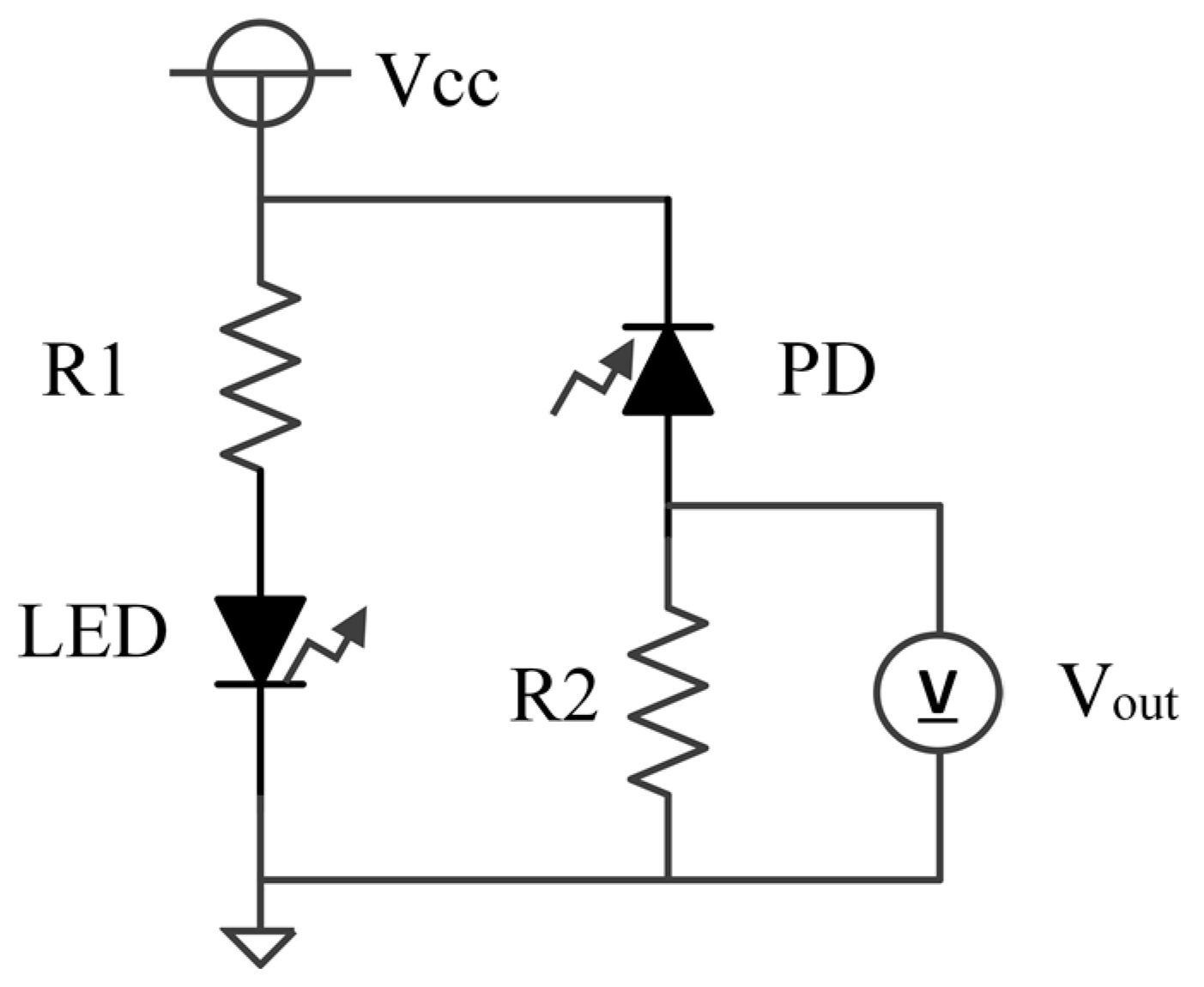 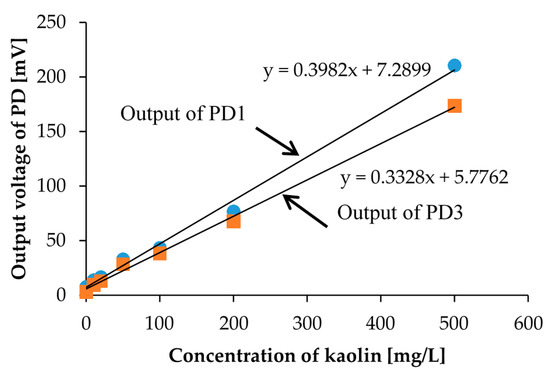 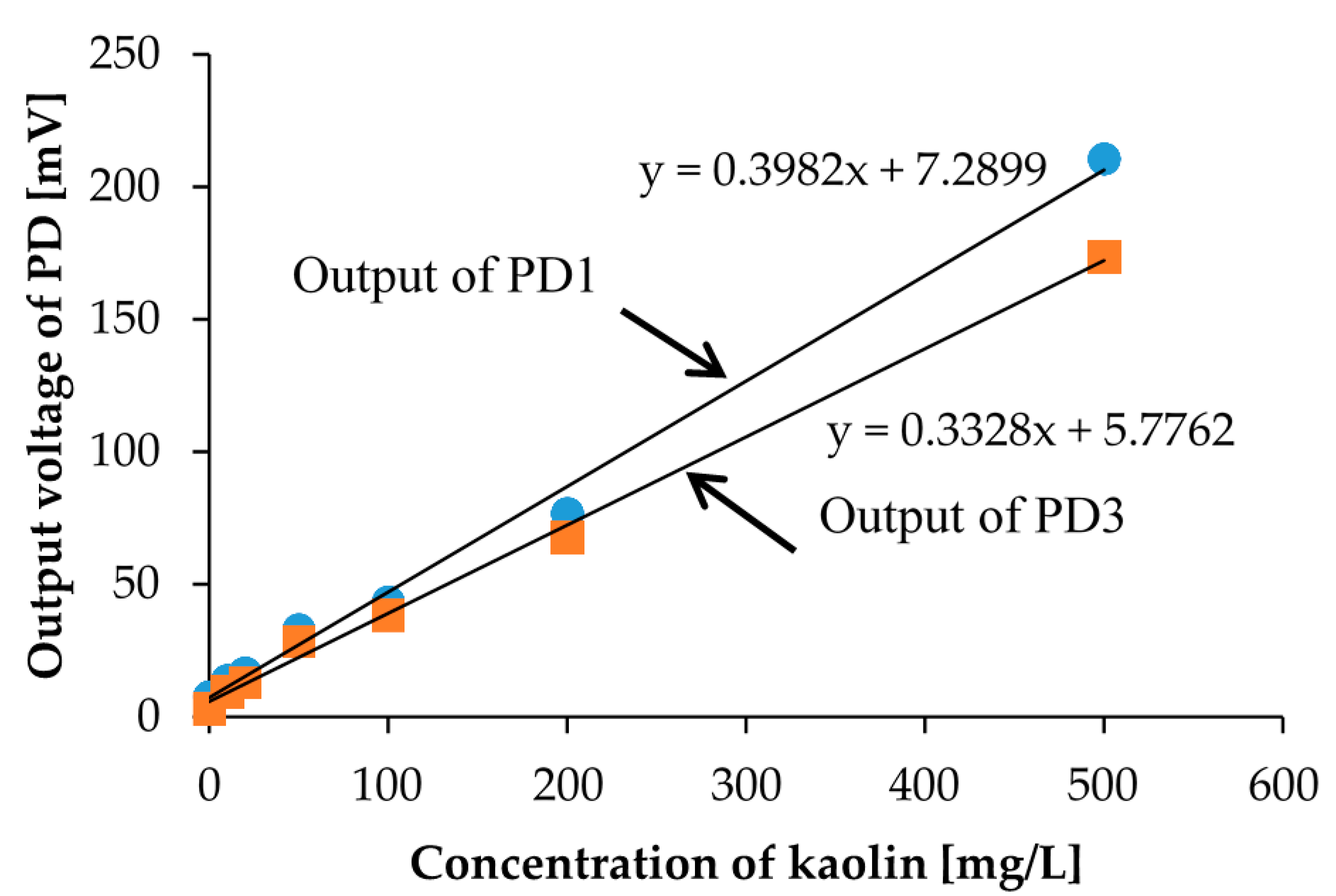 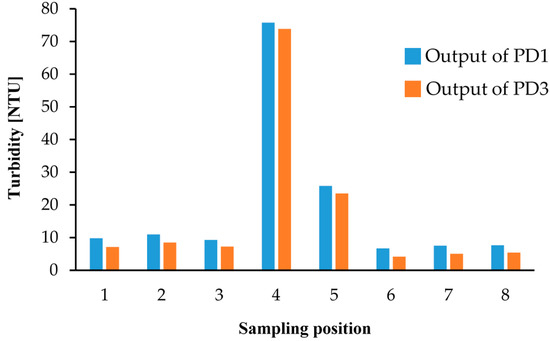 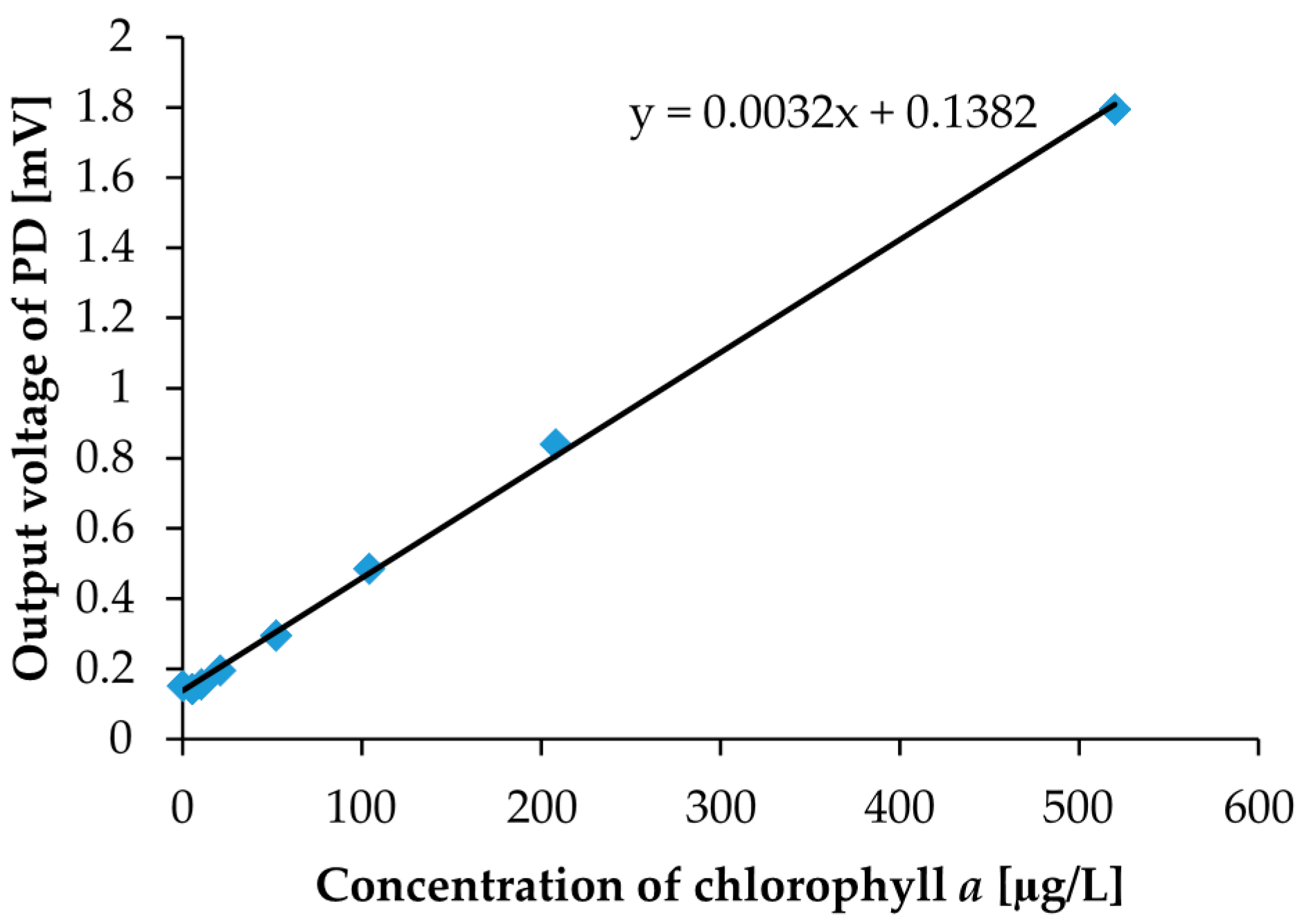 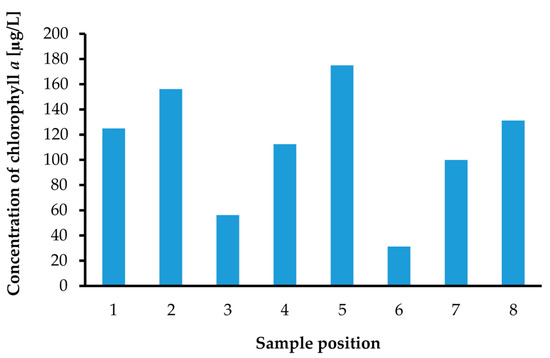 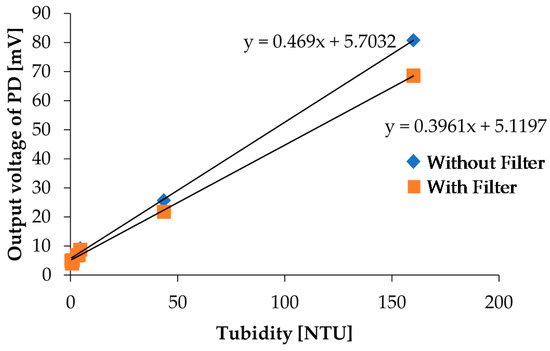 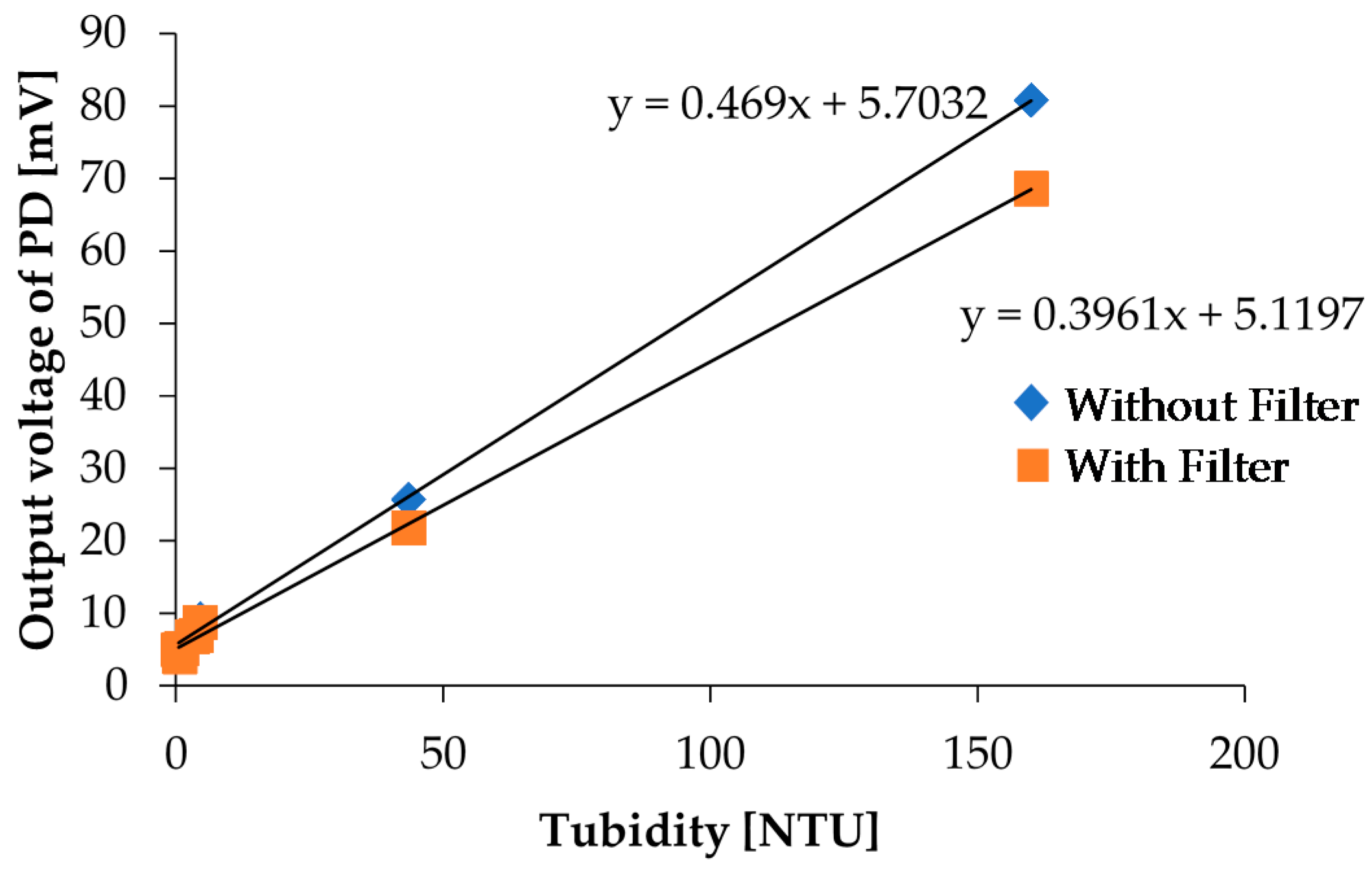