Salvinia leaves represent an extraordinary example of how nature found a strategy for the long term retainment of air, and thus oxygen, on a surface, the so-called ‘Salvinia effect’, thanks to the peculiar three-dimensional and hierarchical shape of the hairs covering the leaves. Here, starting from the natural model, we have microfabricated hairs inspired by those present on the Salvinia molesta leaves, by means of direct laser lithography. Artificial hairs, like their natural counterpart, are composed of a stalk and a crown-like head, and have been reproduced in the microscale since this ensures, if using a proper design, an air-retaining behavior even if the bulk structural material is hydrophilic. We have investigated the capability of air retainment inside the heads of the hairs that can last up to 100 h, demonstrating the stability of the phenomenon. For a given dimension of the head, the greater the number of filaments, the greater the amount of air that can be trapped inside the heads since the increase in the number of solid–air interfaces able to pin the liquid phase. For this reason, such type of pattern could be used for the fabrication of surfaces for controlled gas retainment and gas release in liquid phases. The range of applications would be quite large, including industrial, medical, and biological fields. View Full-Text
Keywords: biomimetics; Salvinia; hierarchical structures; hydrophobic surface; air trapping; 3D laser lithography biomimetics; Salvinia; hierarchical structures; hydrophobic surface; air trapping; 3D laser lithography
►▼ Show Figures 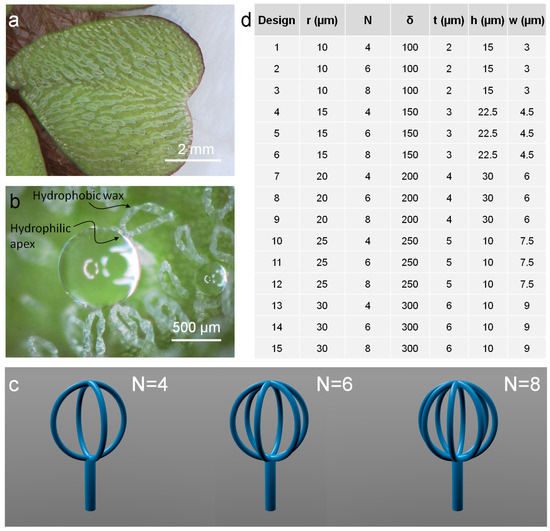