Rapid detection of food-borne pathogens is essential to public health and the food industry. Although the conventional culture method is highly sensitive, it takes at least a few days to detect food-borne pathogens. Even though polymerase chain reaction (PCR) can detect food-borne pathogens in a few hours, it is more expensive and unsatisfactorily sensitive relative to the culture method. We have developed a method to rapidly detect Salmonella enterica by using a compact disc (CD)-shaped device that can reduce reagent consumption in conventional PCR. The detection method, which combines culture and PCR, is more rapid than the conventional culture method and is more sensitive and cheaper than PCR. In this study, we also examined a sample preparation method that involved collecting bacterial cells from food. The bacteria collected from chicken meat spiked with S. enterica were mixed with PCR reagents, and PCR was performed on the device. At a low concentration of S. enterica, the collected S. enterica was cultured before PCR for sensitive detection. After cultivation for 4 h, S. enterica at 1.7 × 104 colony-forming units (CFUs)·g−1 was detected within 8 h, which included the time needed for sample preparation and detection. Furthermore, the detection of 30 CFUs·g−1 of S. enterica was possible within 12 h including 8 h for cultivation. View Full-Text
Keywords: PCR; rapid detection; Salmonella enterica; compact disc; food; meat PCR; rapid detection; Salmonella enterica; compact disc; food; meat
►▼ Show Figures 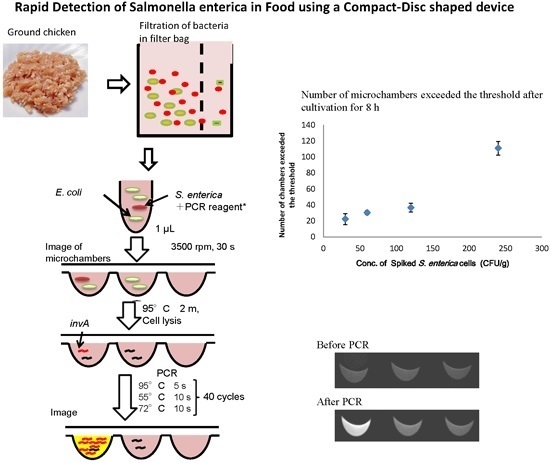