Because there are many beneficial size effects at the micro and nano scales, such as short mixing times, high efficiency in chemical reactions, and minute amounts of reagents and effluent liquids, micro/nano fluidic devices have been extensively studied for use in biomedical applications [1,2,3,4,5,6,7,8,9,10,11,12,13,14,15,16,17,18,19,20]. In particular, nano fluidic devices that contain nano channels can be used for separation and filtration [21], single-molecule detection [22,23,24,25,26], highly efficient PCR [27], chemical analysis [28,29] and nano-photonic sensors [30], with great help of development of nanofabrication technologies [31,32,33,34,35,36,37,38,39,40,41,42,43]. As the channels are reduced in size, the surface roughness and surface chemistry become dominant in determining the dynamics of flow. Electro-osmotic flow (EOF) is well-known to depend on the surface chemistry of the channel walls. An electric double-layer is formed near the channel wall, depending on the wall surface. When an external electric field is applied, the layer moves, generating EOF. Electro-osmotic pumping is considered to be more efficient in driving liquids in micro/nano channels than applying differential pressure by an external pump, given the high viscous drag. The wall surface charge can be quantified by the zeta potential. Therefore, the EOF can be predicted by the given zeta potential and vice versa. The relationship between the zeta potential and EOF can be described by the Smoluchowski equation when the surface roughness is smaller than the electric double layer [44,45,46].
The EOF can be measured by micro-particle image velocimetry (PIV) [47,48,49,50]. Fluorescent nano/micro beads are typically used as tracers, and a confocal microscope can be used to deduce the velocity distribution in three dimensions [51,52,53,54,55,56,57,58,59]. Evanescent waves generated by total index reflection of a laser can be used to derive the velocity near the liquid/wall interface, within approximately 50 nm, when they are used as the excitation light for the fluorescent tracer particles [60,61,62,63,64].
As we described above, the zeta potential can be calculated from a precisely measured EOF using the Smoluchowski equation, but this approach cannot be always applied to practical cases. The relation was modified for non-wetting charged surfaces by considering the fluid slip effect [65], which was experimentally validated [66]. Surface roughness is another factor that needs to be taken into consideration. Since surface roughness does affect EOF, this leads to errors in the zeta potential. On the other hand, even though the zeta potential of the channel wall material was known, it cannot accurately predict the resulting EOF in manufactured nano channels due to the surface roughness.
The surface roughness depends on the manufacturing process [67]. For example, glass, one of the most commonly used materials due to its superior chemical resistivity and transparency, can be patterned by wet etching using hydrofluoric acid (HF), dry etching, or mechanical machining. Wet etching is an isotropic technique but can be conducted at low cost. Dry etching can create anisotropic profiles with a high accuracy and a high aspect ratio. Mechanical machining can be used to fabricate three-dimensional structures. Each etching process culminates in a different surface geometry, depending on the etching conditions.
In this work, we attempted to experimentally obtain the EOF mobility, which is affected by both surface roughness and surface chemistry. The surface roughness is strongly affected by the manufacturing method and etching conditions. We prepared glass channels by wet etching and dry etching using various recipes, and formed micro-channels by attaching micropatterned polydimethyl siloxane (PDMS). We measured the EOF near the glass surface using microPIV, and the glass surface geometry was investigated by atomic force microscopy (AFM). We attempted to correlate the surface topography, and thus, the micromaching processes, with the EOF mobility. Since the Smoluchowski equation can be used to deduce the zeta potential only when the roughness is smaller than the electric double layer thickness, the EOF mobility obtained in the experiments cannot provide the true zeta potential that represents the chemical properties of the surface. Instead, we discuss the potential usage of an effective zeta potential, which is obtained by substituting the EOF mobility into the Smoluchowski equation and depends on both the chemical and topographical properties of the surface. When the effective zeta potential of micromachined glass surfaces is known, the EOF can be deduced using the Smoluchowski equation. The obtained data will be of great help in precisely designing high-performance nano/micro fluidic devices.

The EOF velocity was measured by micro PIV. When charged tracing particles are used for the measurement, the measured velocity is the summation of EOF and electrophoretic flow velocities [56]. The electrophoretic velocity under the identical measurement conditions was obtained in advance and then, subtracted from the measured velocity by micro PIV to deduce the EOF velocity.
First, as described above, glass plates were micromachined by either wet etching with HF or dry etching using NLD plasma. Note that these etching processes created no patterns on the glass surfaces. A polydimethyl siloxane (PDMS, Silpot 184, Toray, Tokyo, Japan) structure with a channel 1 mm in width, 30 mm in length, and 100 µm in height and inlet/outlet holes molded from photolithography patterned SU-8 (SU-8 3000, Nippon Kayaku, Tokyo, Japan) was bonded onto the glass plates after oxygen plasma treatment, as shown in Figure 1. Fluorescent micro beads 0.2 µm in diameter (FluoSpheres carboxylate-modified microspheres 0.2 µm yellow-green fluorescent, Molecular Probes, Inc., Eugene, OR, USA) were used as the tracing particles. These beads were excited by a laser with a wavelength of 505 nm, and emitted fluorescence at 515 nm. 0.5 mL of carboxylate solution containing 2wt% of microbeads was mixed with 99.5 mL of deionized water. Then, this solution was mixed with a solution containing 1 Ml of 1 M HEPES (4-(2-hydroxyethyl)-1-piperazineethanesulfonic acid), 1 mL of 0.1 M KCl, and 98 mL of deionized water. We introduced this 0.005% fluorescent micro-bead solution into the channel. An electric field of 13.3 V/mm was applied and an EOF was generated. The experiments were conducted at 25 °C and 40% Rh. pH of the fluorescent solution was 7.15 and the produced electric double layer thickness was calculated to be 30.2 nm under these conditions. The velocity at the center of the channel in the horizontal plane and 5 µm above the glass surface was measured by micro-PIV. Though three channel walls were made of PDMS, the EOF generated near the glass surface was determined by the characteristics of the glass surface [56]. In order to prevent electrolysis, the measurement started 2 s after the electric field was applied and the measurement time was limited to be 2 s. Note that we experimentally confirmed that the EOF became steady 1 s after the field was applied. The micro PIV measurement was conducted one time for a sample since it was difficult to wash out all the tracing particles from the channel after each measurement, i.e., 5 EOF velocity data were obtained for one machining condition. 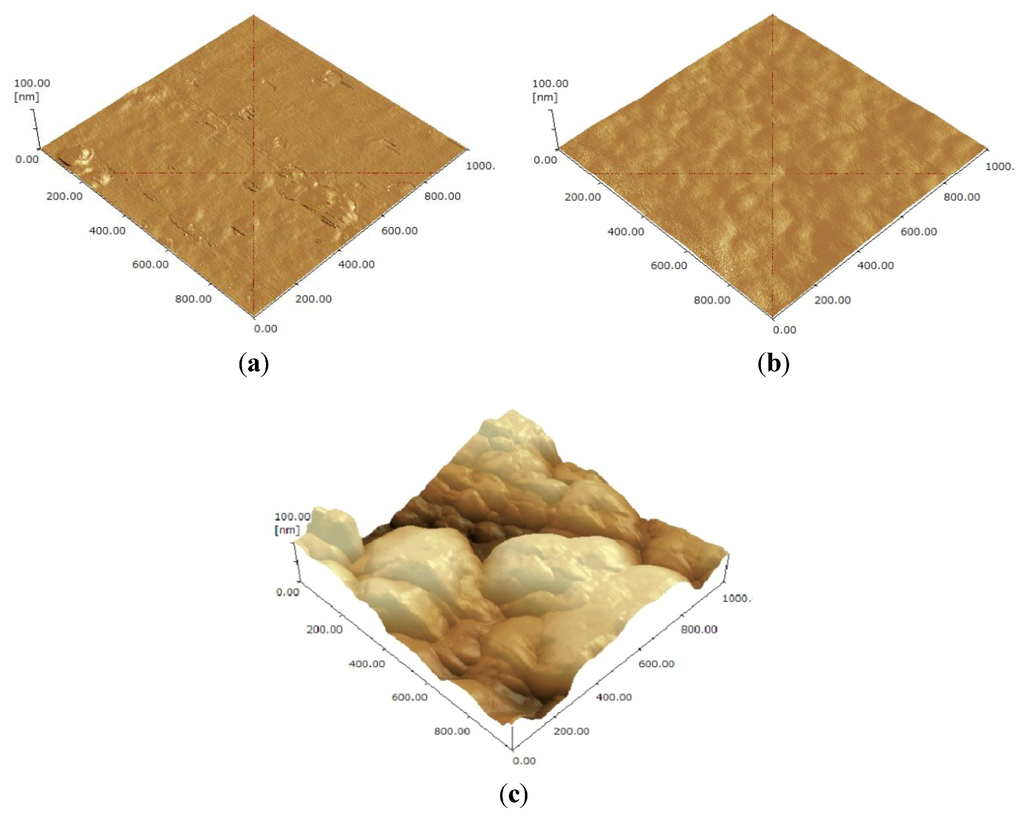 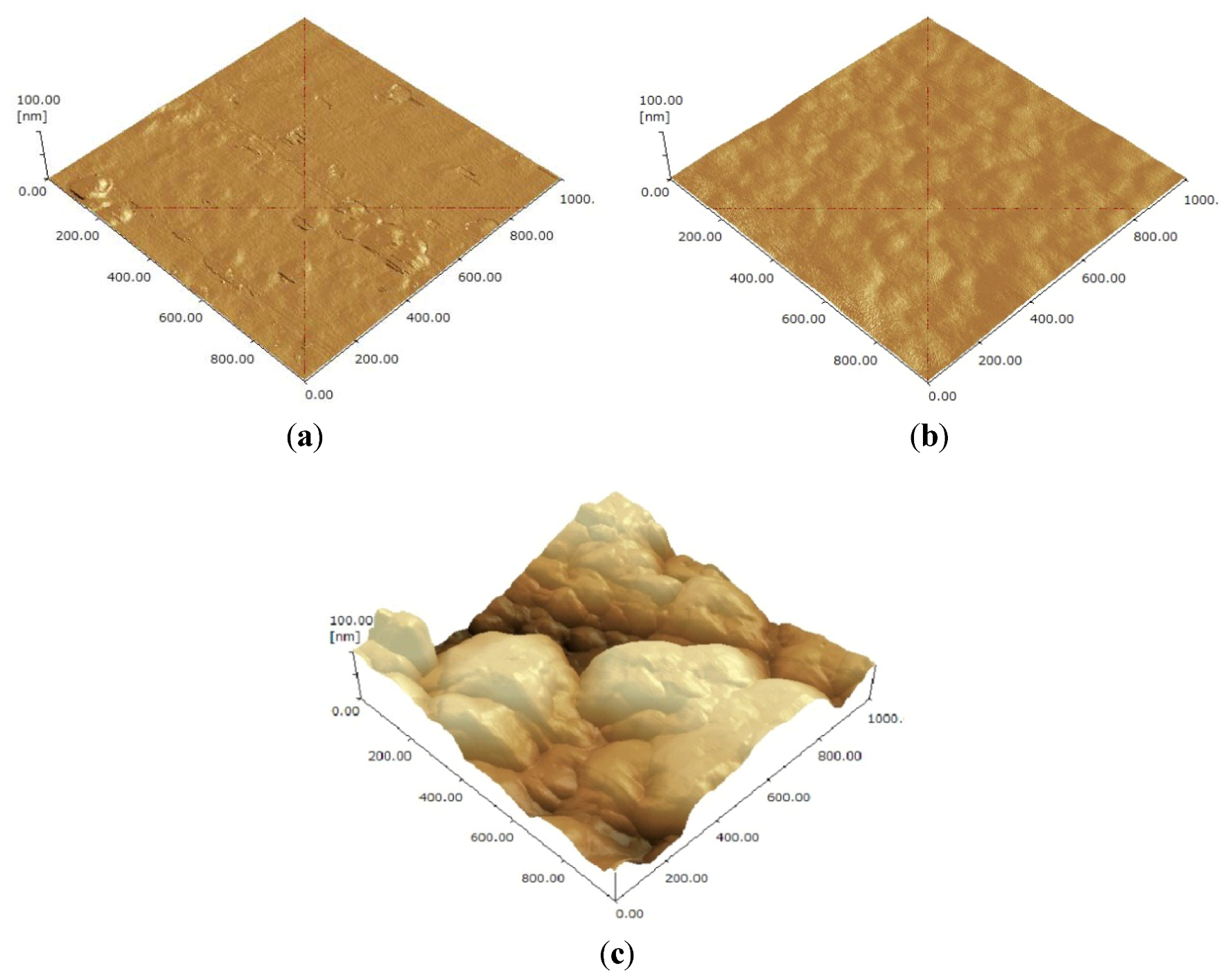 The EOF velocity depends on the electric field, viscosity and permittivity of the liquid, and the surface properties of the channel. The surface properties include physical characteristics, surface roughness, and chemical properties. The zeta potential is used as a measure of the chemical properties, and can be deduced using the Smoluchowski equation if the roughness is smaller than the thickness of the electric double layer,

where U is the average velocity in the channel, μ and ε are the viscosity and permittivity, respectively,

is the zeta potential, and E is the applied electric field strength [46]. 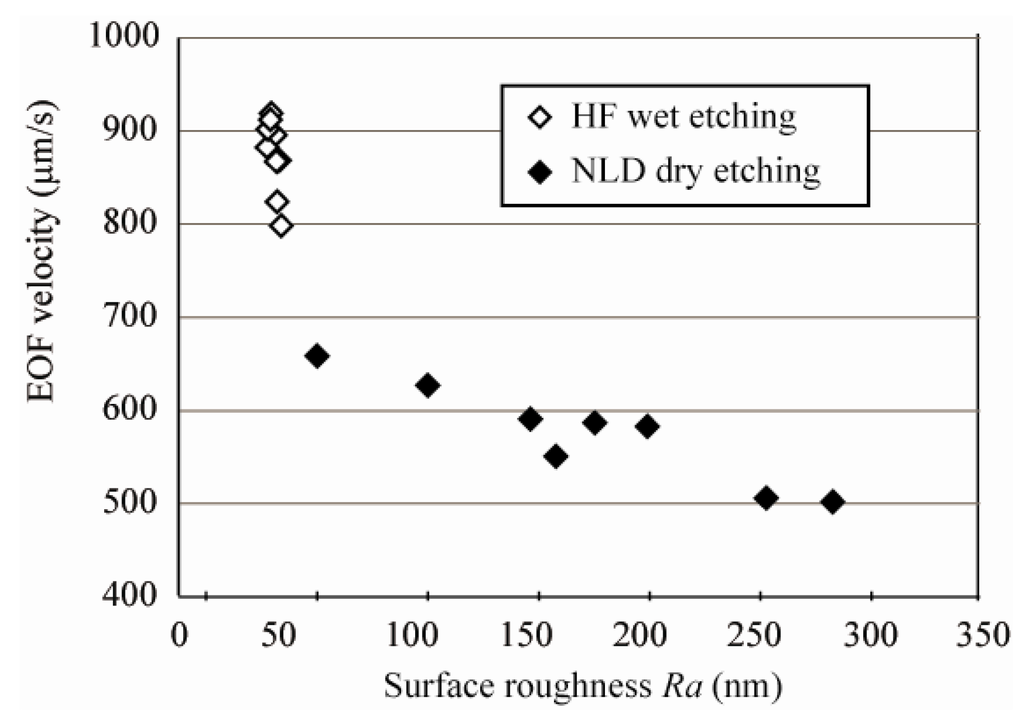 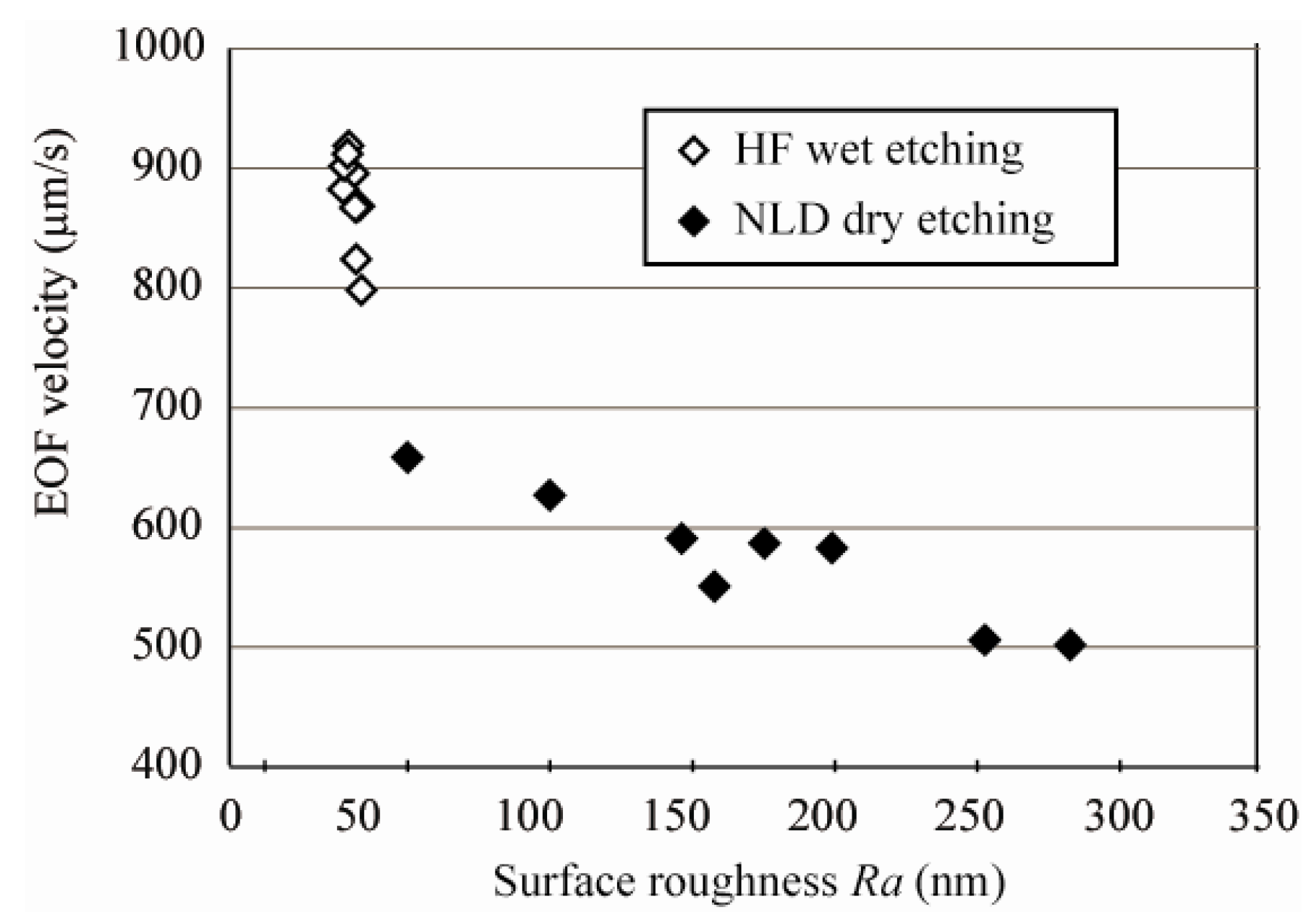 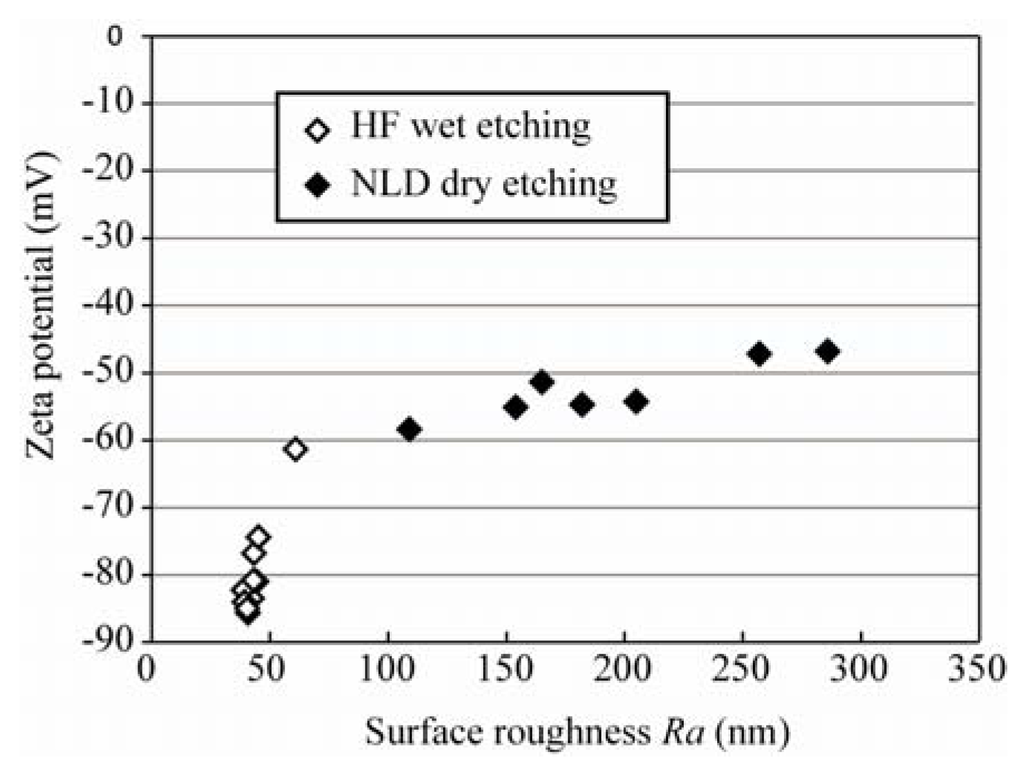 This work was supported by a Grant-in-Aid for Scientific Research (S) (21226006). We greatly appreciate the “Sensing center for nano/micro thermofluid & thermal properties, Keio University” of “Low-Carbon Research Network” funded by the Ministry of Education, Culture, Sports, Science and Technology (MEXT), Japan for the microPIV system.