2.1. Geometry of the Asymmetric Acute Junction

The geometry of the asymmetric microfluidic junction includes the main, left, and right channels, as shown in Figure 1. The main and left channels are intersected with an acute angle θ, while the left and right channel are aligned. All three channels have a width of w = 100 μm and a depth of h = 100 μm. The main channel has a length of Lm = 11 w, while the two branching channels have the same length of LL = LR = 10.5 w. The numerical results shows that these dimensions are long enough to obtain an equilibrium of the droplet shape before arriving at the acute junction. Water-in-oil droplets were investigated in this work, that is, the droplet fluid and the medium fluid were set to water and oil, respectively. Following previous work conducted by Hoang et al. [65], the viscosity and density of the water droplet were μd = 1 × 10−3 Pa·s and of ρd = 1000 kg/m3, respectively. The medium oil fluid had a viscosity of μm = 8 × 10−3 Pa·s and a density of ρm = 770 kg/m3. The interfacial tension between the medium fluid and droplet fluid was σ = 5 × 10−3 N/m. The velocity U of the main channel varied from 4 × 10−3 to 4 × 10−2 m/s, and the corresponding capillary number was Ca = μmU/σ = 6.4 × 10−3–6.4 × 10−2. The capillary number represents the relative effect of viscous force versus surface tension. The non-dimensional volume of the droplet was within the range of Vd/w3 = 0.5–2.5.

In this work, we used the volume of fluid (VOF) model [66] to simulate the interface between the droplet and the medium fluid, which has been successfully applied to modelling various droplet flows (e.g., Refs. [67,68,69]). The VOF model is a numerical method for modelling the liquid–liquid interface. It is based on the use of a fractional function C, which is defined as an integral of the characteristic functions of the fluid in a computational grid cell. C is a continuous function, with 0 ≤ C ≤ 1. If the cell is empty of the tracked fluid, C = 0. If the cell is full of tracked fluid, C = 1. Additionally, if the cell contains an interface between the tracked and non-tracked fluids, 0 < C < 1. The governing equations for the droplet flow in microfluidic channel consist of a continuity equation and momentum equation, which can be expressed as follows, where p is the pressure, and ρ and μ represent the density and viscosity of the two-phase fluids, respectively. Fs denotes the surface tension force obtained by the continuum surface force (CSF) model [70]. The density, viscosity, and surface tension force of the two-phase fluids can be calculated by where ρd and ρm represent the fluid density of the droplet and medium phase, respectively. μd and μc denote the fluid viscosity of the droplet and medium phase, respectively. αd and αm are the volume fraction of the droplet and medium phase, respectively. αd + αm =1. κd is the curvature of the phase interface.
The numerical simulations were conducted using commercial software Fluent 17.0. The transient laminar flow and VOF model were used for the calculations of the governing equations. Velocity-inlet and pressure-outlet boundary conditions were applied for the inlet of the main channel and the outlets of the left and right channels, respectively. A no-slip stationary boundary condition was employed at the walls, which were assumed to be super hydrophobic with a contact angle of 180°, as was conducted in Refs [65,67]. The SIMPLEC method was used to calculate the pressure–velocity coupling, due to the less convergence time [60,71]. Following previous studies (e.g., Refs. [67,68,69]), the Geo-Reconstruct scheme was chosen to solve the volume fraction of the two immiscible fluids and the PRESTO! algorithm was applied to calculate the pressure term. The second order upwind scheme was used to calculate the momentum term. The grid independence study was performed, which shows that the grid size of Lgrid = 1/30 w, where w is the channel width, was enough to obtain the satisfactory results. Numerical simulations were conducted on a workstation (Intel®Xeon® Platinum 8358P with dual processors, 32 cores, and 256 GB RAM). The computation time for each run was approximately 2 to 4 days, which varied at different inlet velocity.

Previous studies (e.g., Ref. [65]) have successfully proven that VOF model can be used to simulate the droplet formation and breakup in microfluidic channel. In this work, the numerical model was further validated by examining the Laplace’s law and Taylor deformation of the droplet in microfluidic channels, as was conducted in Ref. [72].
We first validated our model by examining the Laplace’s law. A circular water droplet was located at the center of a square oil domain with the size of 256 μm × 128 μm. The mesh had a grid size of Δ = 1 μm. No slip stationary wall conditions were applied to all boundaries. In this simulation, the water had a density of ρw = 1000 kg/m3 and a viscosity of μw = 1 × 10−3 Pa·s, while the oil had a density of ρd = 1000 kg/m3 and a viscosity of μo = 8 × 10−3 Pa·s. The interfacial tension of two fluid was γ = 5 × 10−3 N/m. The pressure difference Δp across the droplet interface in the equilibrium state was provided by the Laplace’s law Δp = γ/R, where R denotes the droplet radius. It can be observed from Figure 2 that the pressure difference Δp exhibits a linear relationship with the 1/R, and the numerical results of present model agree well with those calculated by the Laplace’s law. This indicates that the present model is acceptable for predicting the droplet size in the microchannel.
To further validate the numerical model, a three-dimensional (3D) deformation of the droplet in a simple shear flow was examined. In this case, the computational domain had a length of Ls = 128 μm and a width and a height of Ws = Hs = 62 μm. The initial diameter of the droplet was set to be Di = 20 μm. The density and the viscosity of droplet and medium fluids were ρd = ρm = 1000 kg/m3 and μd = μm = 1 × 10−3 Pa·s. The capillary number Ca varied from 0 to 0.03. The three-dimensional deformation D of a droplet in a simple shear flow was calculated using the Taylor deformation number [73], where L and B denote the major and minor axes of the deformed droplet, respectively.
Figure 3 presents the dependence of droplet deformation in the shear flow on the capillary number. The results of droplet deformation simulated by the Lattice Boltzmann method (LBM) [73] are shown for the comparison. It can be observed that the present results agree well with those obtained by the theoretical prediction and the LBM. This indicates that present model can be used for the modelling of the deformed droplet within a satisfactory accuracy.

3.3. Phase Regime of Droplet Behavior in the Acute Junction

In most real droplet-based microfluidics, the fluorinated oil FC40 is one of commonly used medium fluid and 1–5% PEG-PFPE is used as surfactant. To examine whether the proposed method can be used in real experiments, we further investigated the volume-based droplet sorting in the acute junction with an angle of θ = 50°. In these simulations, FC40 was used as the medium fluid, with the density and viscosity of ρm = 1850 kg/m3 and μm = 4.1×10−3 Pa·s, respectively. Following the experimental studies of droplet flow in Refs. [74,75], in which 1–5% PEG-PFPF was used for the surfactant, three values of interfacial tensions were chosen, i.e., σ = 3, 7, and 12 mN/m. The channel walls were set to be hydrophobic with a contact angle of 150°. Figure 13 presents the droplet sorting behavior at different interfacial tensions. It is observed that the droplet exhibits different sorting behavior at different interfacial tensions. The droplet with the volume of Vd/w3 = 0.85 enters into the left channel at the interfacial tension of σ = 3 mN/m while moving into the right channel at σ = 7 and 12 mN/m. Moreover, the droplet undergoes a transition of sorting left to sorting right with the reduction in Vd/w3 from 0.85 to 0.6 at σ = 3 mN/m. In contrast, the droplets with the volume of Vd/w3 = 0.85 and 0.6 are all sorted to the right channel at σ = 7 and 12 mN/m. These facts indicate that the interfacial tension has a great impact on the sorting behavior. It can be inferred that the boundary between sorting left and sorting right in the phase regime is different at various interfacial tension. In spite of this, these results show that the proposed asymmetric acute junction could be used for droplet sorting in real applications of droplet-based microfluidics.
Many methods have been developed for droplet sorting in recent years. For example, acoustic methods can achieve the on-demand sorting of the droplets [31,32]. However, one disadvantage of acoustic methods is that their operation requires expensive and complex equipment, such as function generators, voltage amplifiers, signal processors, and acoustic transducers [36]. In contrast, the proposed passive sorting method only relies on the geometry of asymmetric acute junctions. It has the advantages of simple-fabrication and cost-effective. Additionally, a high-throughput sorting could be achieved using a combination of a massive number of acute junctions in one microfluidic chip.

This research was funded by Postdoctoral Fellowship of China Scholarship Council (CSC) under grant No.201908330071. 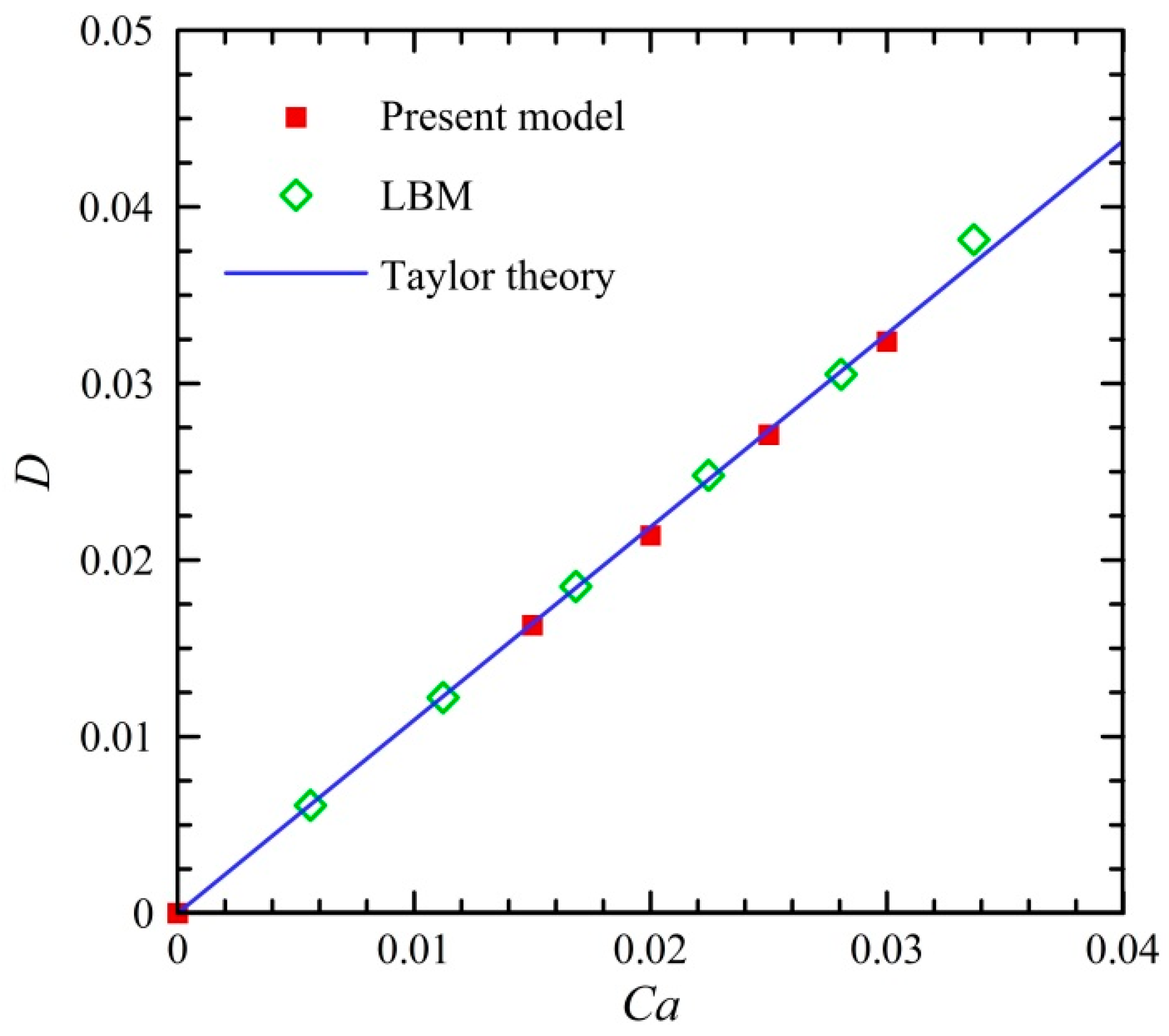 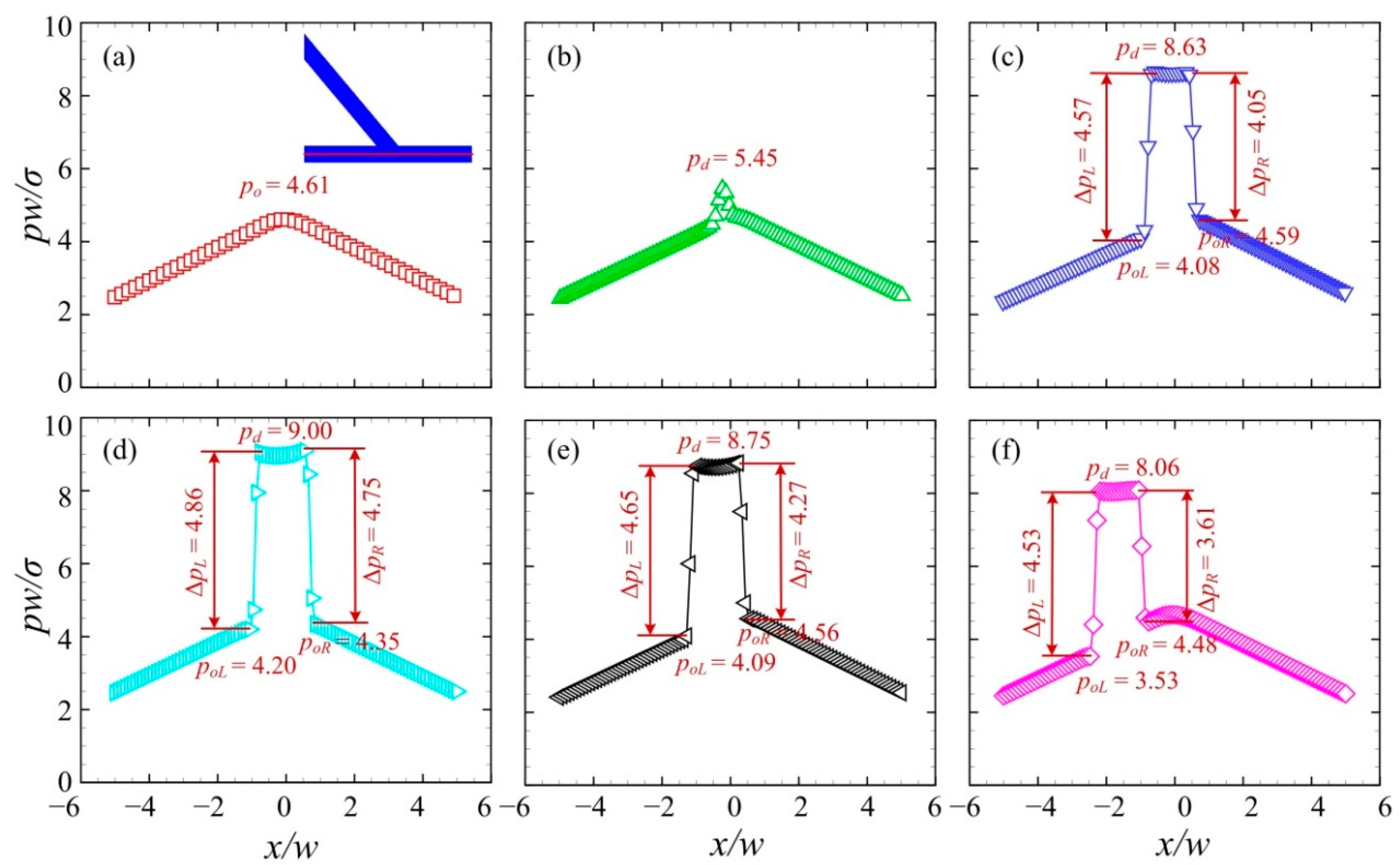 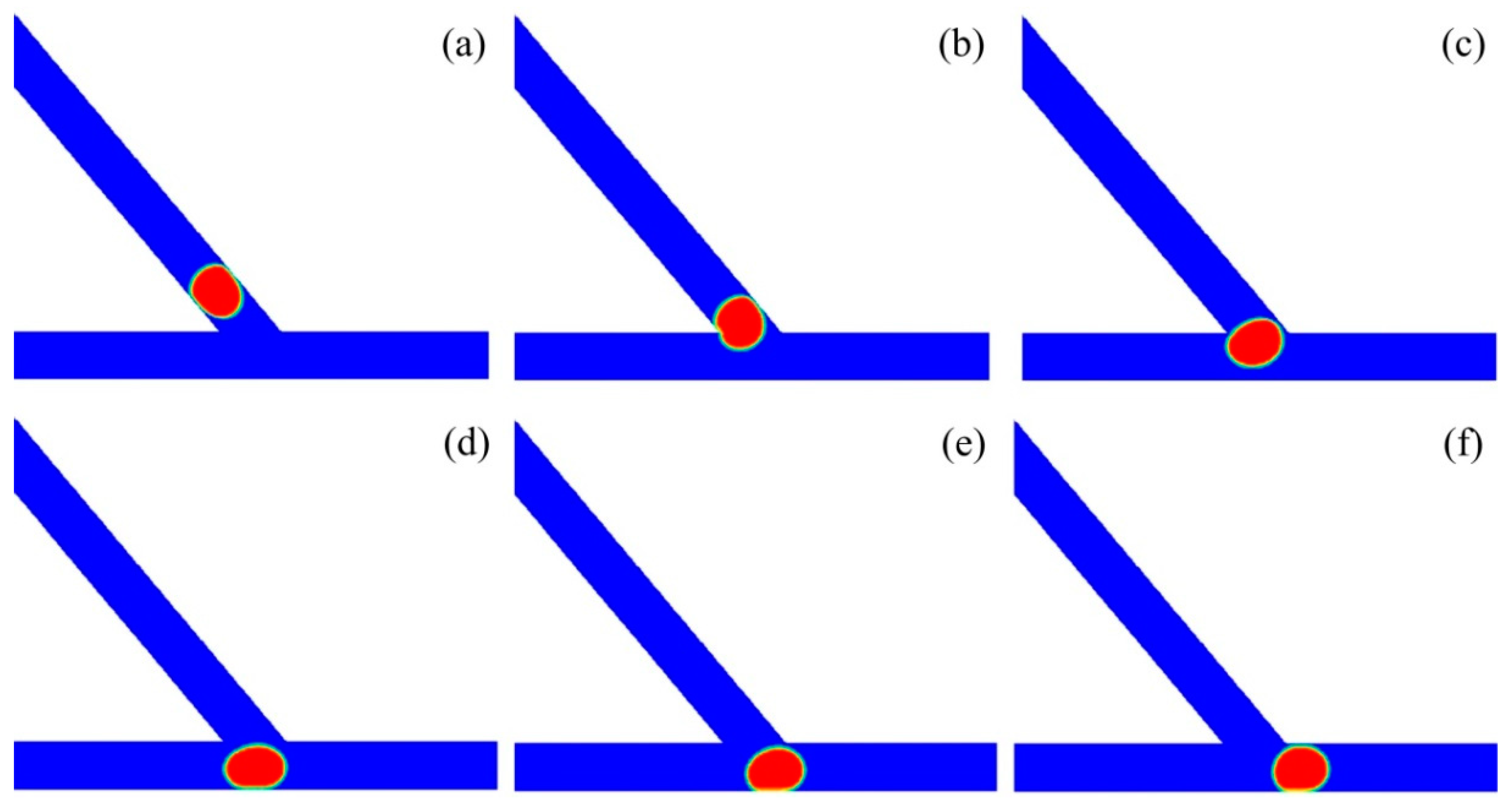 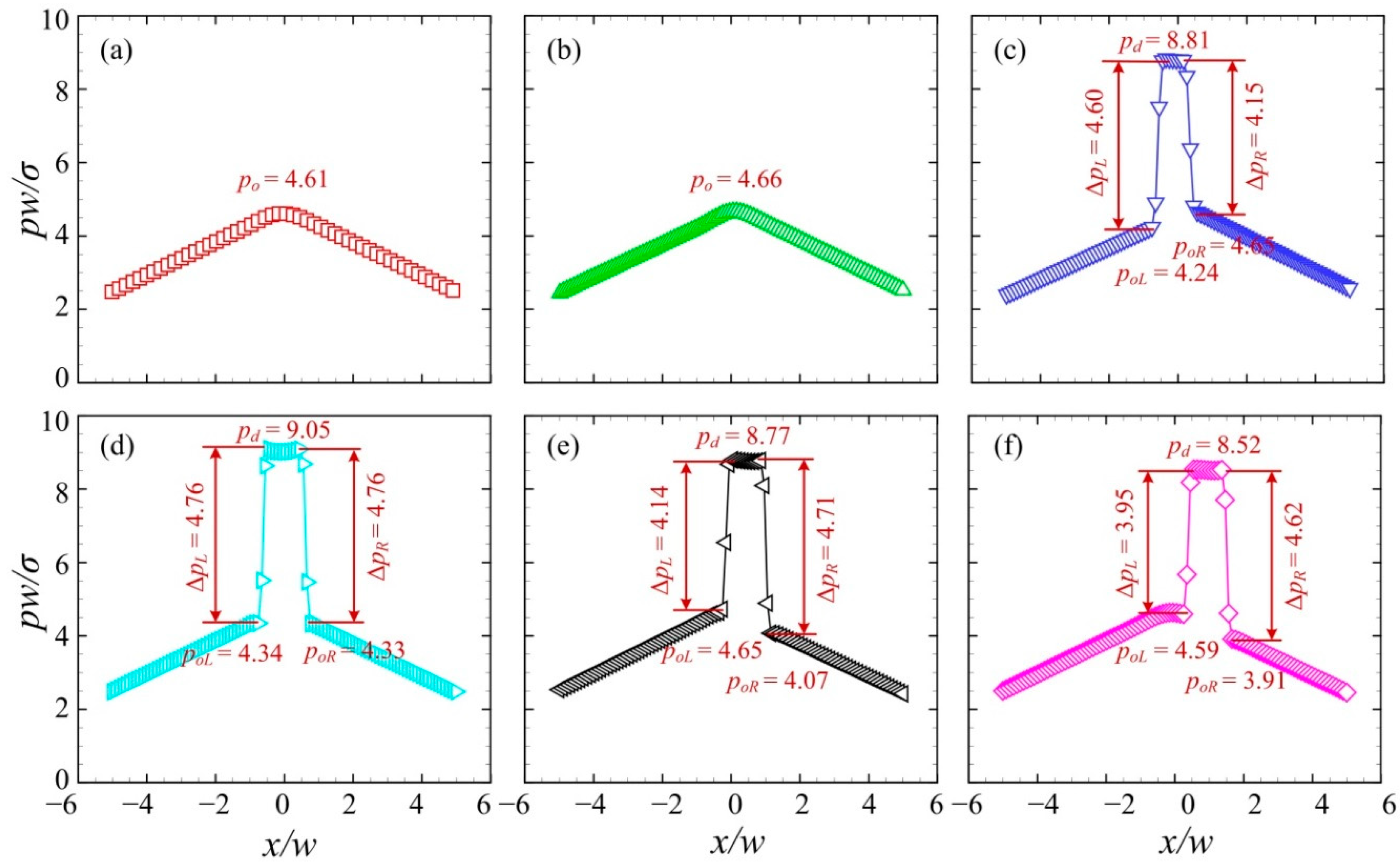 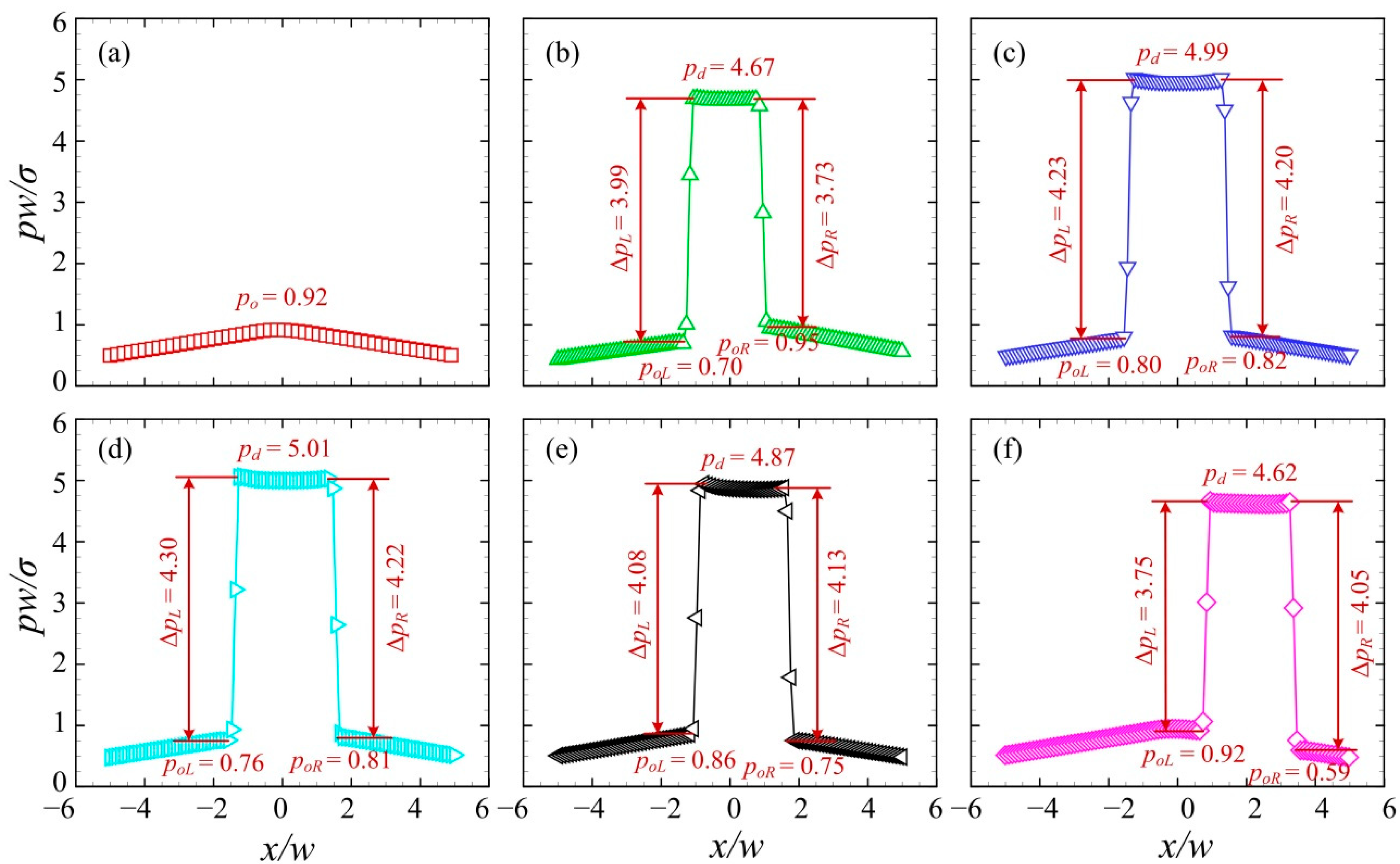 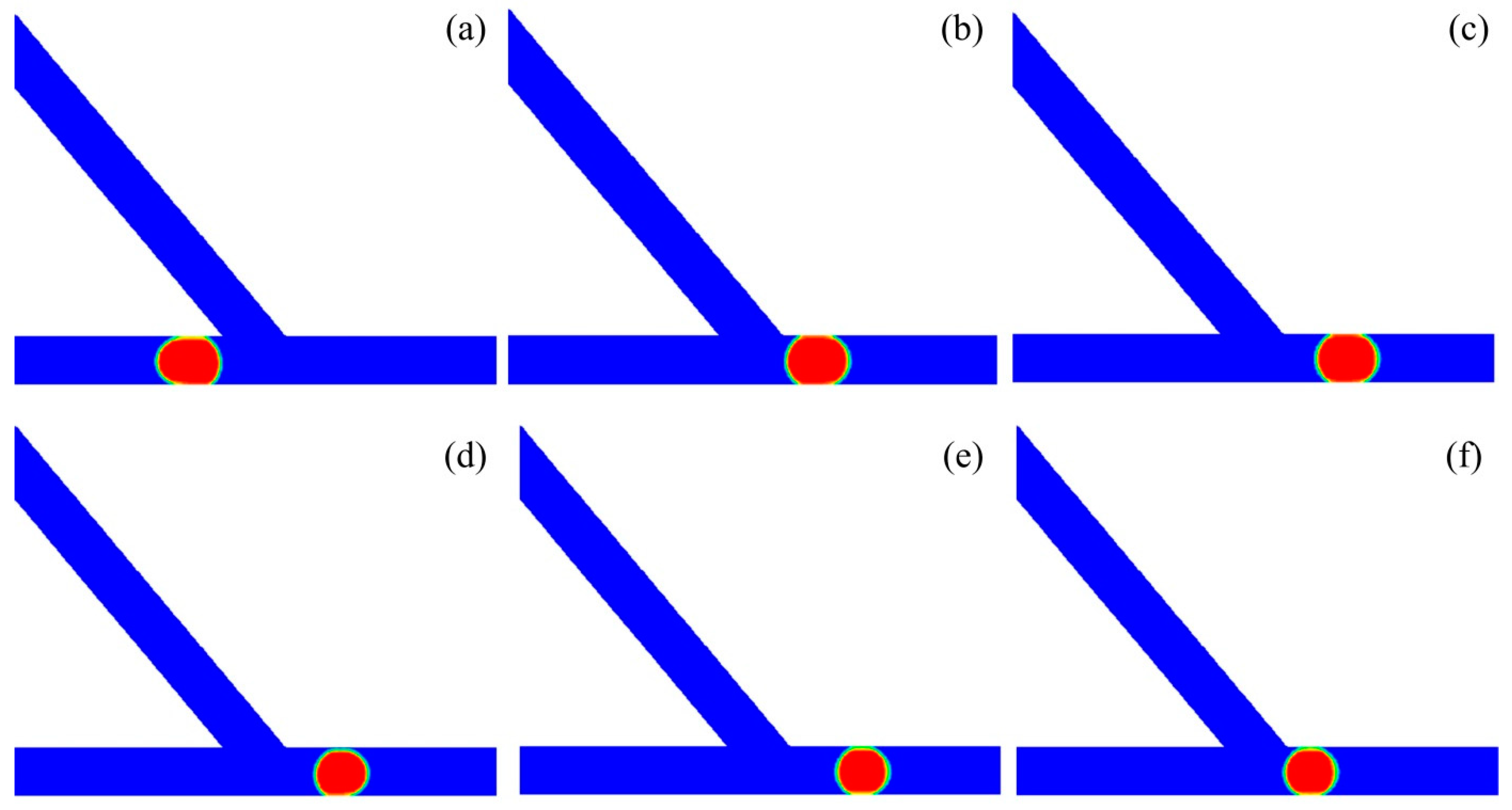