We investigate the compatibility of three 3D printing materials towards real-time recombinase polymerase amplification (rtRPA). Both the general ability of the rtRPA reaction to occur while in contact with the cured 3D printing materials as well as the residual autofluorescence and fluorescence drift in dependence on post curing of the materials is characterized. We 3D printed monolithic rtRPA microreactors and subjected the devices to different post curing protocols. Residual autofluorescence and drift, as well as rtRPA kinetics, were then measured in a custom-made mobile temperature-controlled fluorescence reader (mTFR). Furthermore, we investigated the effects of storage on the devices over a 30-day period. Finally, we present the single- and duplex rtRPA detection of both the organism-specific Klebsiella haemolysin (khe) gene and the New Delhi metallo-β-lactamase 1 (blaNDM-1) gene from Klebsiella pneumoniae. Results: No combination of 3D printing resin and post curing protocol completely inhibited the rtRPA reaction. The autofluorescence and fluorescence drift measured were found to be highly dependent on printing material and wavelength. Storage had the effect of decreasing the autofluorescence of the investigated materials. Both khe and blaNDM-1 were successfully detected by single- and duplex-rtRPA inside monolithic rtRPA microreactors printed from NextDent Ortho Clear (NXOC). The reaction kinetics were found to be close to those observed for rtRPA performed in a microcentrifuge tube without the need for mixing during amplification. Singleplex assays for both khe and blaNDM-1 achieved a limit of detection of 2.5 × 101 DNA copies while the duplex assay achieved 2.5 × 101 DNA copies for khe and 2.5 × 102 DNA copies for blaNDM-1. Impact: We expand on the state of the art by demonstrating a technology that can manufacture monolithic microfluidic devices that are readily suitable for rtRPA. The devices exhibit very low autofluorescence and fluorescence drift and are compatible with RPA chemistry without the need for any surface pre-treatment such as blocking with, e.g., BSA or PEG. View Full-Text
Keywords: recombinase polymerase amplification (RPA); antibiotic resistance; 3D printing recombinase polymerase amplification (RPA); antibiotic resistance; 3D printing
►▼ Show Figures 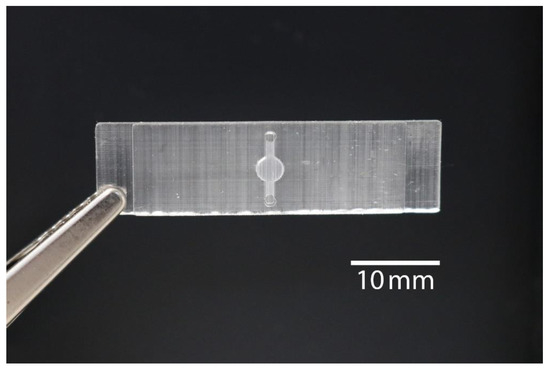