Development of a Portable SPR Sensor for Nucleic Acid Detection

Design, high precision placement, and high throughput of 3D conductive and insulating nanostructures is attractive for many fields. These assemblies unlock complex geometry and can be created atop other structurally complex sites, otherwise inaccessible by standard lithographic methods [1,2,3,4,5,6]. Recent advances in the bottom-up design of 3D features include two-photon lithography, focused-electron-beam-induced deposition, and gallium ion beam irradiation [7,8,9,10].
Two-photon lithography is a technique capable of producing very complex nanostructures at a spatial resolution of ~140 nm [11]. By polymerizing the precursor with a laser, virtually any structure can be printed on the micron scale. Furthermore, many precursor polymers are being developed to offer material specificity for a given application [12,13].
Similar concepts are used in additive manufacturing, where layer by layer fabrication of 3D structures is possible for a variety of materials [14,15]. Here, 40–60 μm droplets of metal ink or, for features less than 10 µm, nanoparticle inks and ion solutions may be used [16]. Recently, an additive manufacturing process featuring a lithography-based approach showcasing Ni octet-lattices with 2-μm unit cells, 300–400-nm beams, and 30-nm layers has been demonstrated [17]. Direct write via electrolysis induced by electron and ion beams from liquid precursor solutions consisting of H2PdCl4 and K2PtCl6 has also been demonstrated as an approach for creating 3D Pd and Pt structures with feature sizes ~15 nm feature size when using a He ion beam [18,19].
An alternative route towards 3D nanostructures is using a gas injection system (GIS) in tandem with a charged-particle beam—an active area of research in recent years. Significant efforts went into developing topics such as nanoscale magnetic structures, freestanding copper nanostructures, precursor development (including liquid based precursors), optimization of operating conditions for working with 2D materials, simultaneous use of oxidants for enhanced deposit purity, and theory developments [20,21,22,23,24,25,26,27,28,29,30,31,32,33,34,35,36]. Fowlkes et al. recently demonstrated a duo of predictive modeling and fabrication; showcasing complex 3D nanostructures with focused-electron-beam-induced deposition (FEBID) [37]. This method is optimized for the deposition of general mesh object models defined as interconnected networks of suspended 3D nanowires—a form of 3D nanoprinting [38,39,40,41]. Electron beam induced heating has emerged as an important physical phenomenon to consider during 3D nanoprinting [42]. Recently, 3D nanoprinting using the electron beam has been extended to include the deposition of solid nanoscale object models, moving beyond the deposition of mesh object frameworks [43]. These studies [42,43] have revealed that electron beam heating can decrease the deposition rate dynamically, effectively degrading deposit quality if the heating effect is not accounted for during design. In fact, low temperature ion-induced deposition has been demonstrated as a means to increase growth rates but should also implicitly limit the negative side-effects of beam heating [44,45]. Additionally, 3D nanoprinting with automated methods to correct for deposit distortions, regardless of the origin of the unwanted deformation [46], have been demonstrated in nanomagnetic Co/Fe nanowire framework [47].
In addition to FEBID, gallium ion beam irradiation has been used for decades to deposit metals via a process referred to as focused-ion-beam-induced deposition (FIBID) [48,49,50]. Relative to FEBID, FIBID deposits are generally larger due to the increased spot size, greater secondary electron (SE) yield, and higher ion-solid energy transfer which dissociate adsorbed precursor molecules. Complex 3D structures are also possible with the gallium beam, with relatively high throughput when compared to FEBID [48,49,51]. Recently, interest in direct-write deposition of 3D conductive structures has shifted towards achieving single-digit-nanometer-scale fabrication, largely driven by the pursuit of new approaches to interconnecting architectures [5,50,52]. Gas field ion sources have been demonstrated to manufacture smaller and cleaner 3D structures [52,53,54]. While several studies discuss and demonstrate helium ion microscopy (HIM) as a nanofabrication tool for 3D structures, few studies [55] to date systematically explore the parameter space of the HIM gas flow injection system, or the interplay of deposition and milling that occurs during the fabrication process [31,54,56,57,58].
In this work, we demonstrate complex 3D mesh geometries, with features as small as 16 nm at full width half maximum (FWHM), made in a HIM with a gas flow injection system. We rely on automated methods to control the microscope and the gas injection system settings to yield 3D nanostructures as large as 300 nm made of interconnected parts. The manufacturing process is relatively quick, with each shape completing in or under one minute. Three-dimensional structure growth on conductive as well as insulating SiO2 substrates is possible and is demonstrated. Furthermore, we explore beam heating effects and the interplay of deposition and milling, which occurs as matter interacts with an accelerated ion beam in FIBID of free-standing structures by mapping deposition and milling regimes as a function of beam pitch and dwell time. Understanding beam heating and the simultaneous control of both milling and deposition offers the potential for higher fidelity and higher purity structures, and the ability to repair structures in situ.

3D platinum structures were grown on boron doped P-type silicon substrates with a Zeiss Orion Nanofab helium ion microscope (Zeiss, Peabody, MA, USA). Substrates were plasma cleaned in nitrogen plasma for 1 minute. All deposition patterns were executed using the NanoPatterning and Visualization Engine (NPVE) pattern generator produced by Fibics Inc. (Ottawa, ON, Canada). A 25 kV He+ beam was used at various current to control deposit dimensions. The working distance of 8.142 mm was used throughout the experiment. The helium pressure was 2 × 10−6 torr with a spot number 4. The HIM was used for imaging as well as FIBID. A first generation OmniGIS Gas Injection System, (GIS) produced by Oxford Instruments (Abingdon, UK), was utilized to flow MeCpPtMe3 into the HIM using ultra-pure (99.9995%) nitrogen carrier gas, with a 5% duty cycle. The Pt precursor was heated to 33 °C prior to use to minimize spiking of the chamber pressure. The vertical section of the pillar was grown by parking the beam for 2 ms. The chamber pressure prior to gas injection was ~3 × 10−7, and ~1.0 × 10−5 torr during the GIS operation. The GIS was at approximately 45° with respect to the ion column. All 3D structures were generated using an in-house computer-aided design (CAD) software package (ORNL, Oak Ridge, TN, USA) [37,59]. To analyze the composition of the nanostructures, energy dispersive X-ray spectroscopy (EDS) analysis was performed on a Zeiss Merlin SEM with a Bruker EDS spectrometer (Bruker, Billerica, MA, USA).

Image analysis consisted of three main aspects: image pre-processing, segmentation, feature extraction, and quantification [60,61,62]. We used open-source Python 2.7 for all analysis steps. First, the image background was removed using local morphological filtering with circular filtering window of 400 pixels in diameter, to enhance the nanostructures. We then used a watershed function to automatically select the nanostructures and create a mask. After that segmentation was performed to separate all pixels corresponding to individual pillars. Finally, each pillar was fitted as by the function representing two connected linear segments. Fitting results were used to calculate length of the top segment l, its width w and angle α. An example of the single pillar analysis is shown in Figure 1c, where black dots show actual pixels of the pillar and red lines represent fitting results.

Project was conceived by, A.B., P.D.R. and O.S.O.; HIM data collection, A.B., M.J.B., S.K., M.G.S., and B.B.L.; CAD software, J.D.F.; Monte Carlo simulations, K.M.; Python data analysis code, A.I.; all authors contributed the writing and editing of the manuscript. All authors have read and agreed to the published version of the manuscript.

This research was conducted at the Center for Nanophase Materials Sciences, which is a DOE Office of Science User Facility. MGS acknowledges support from the U.S. Department of Energy (DOE) under Grant No. DE-SC0002136. 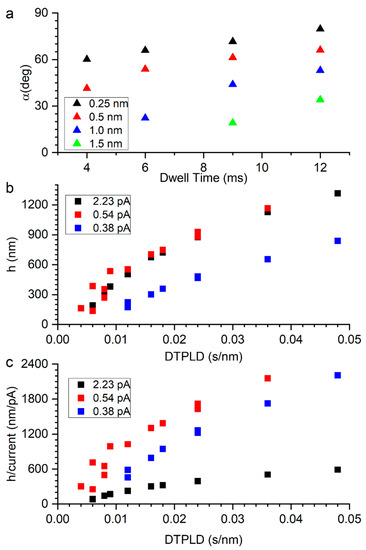 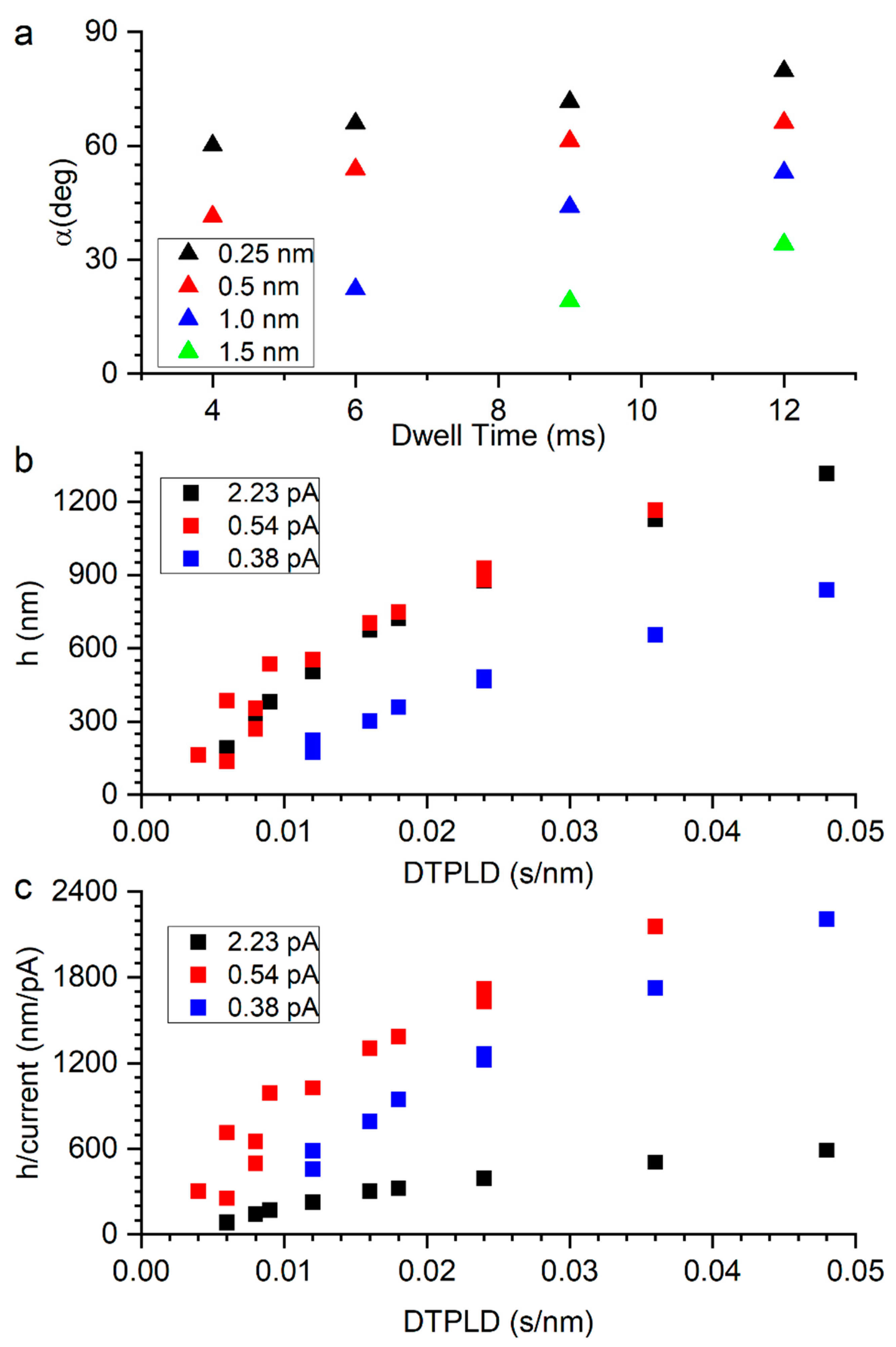 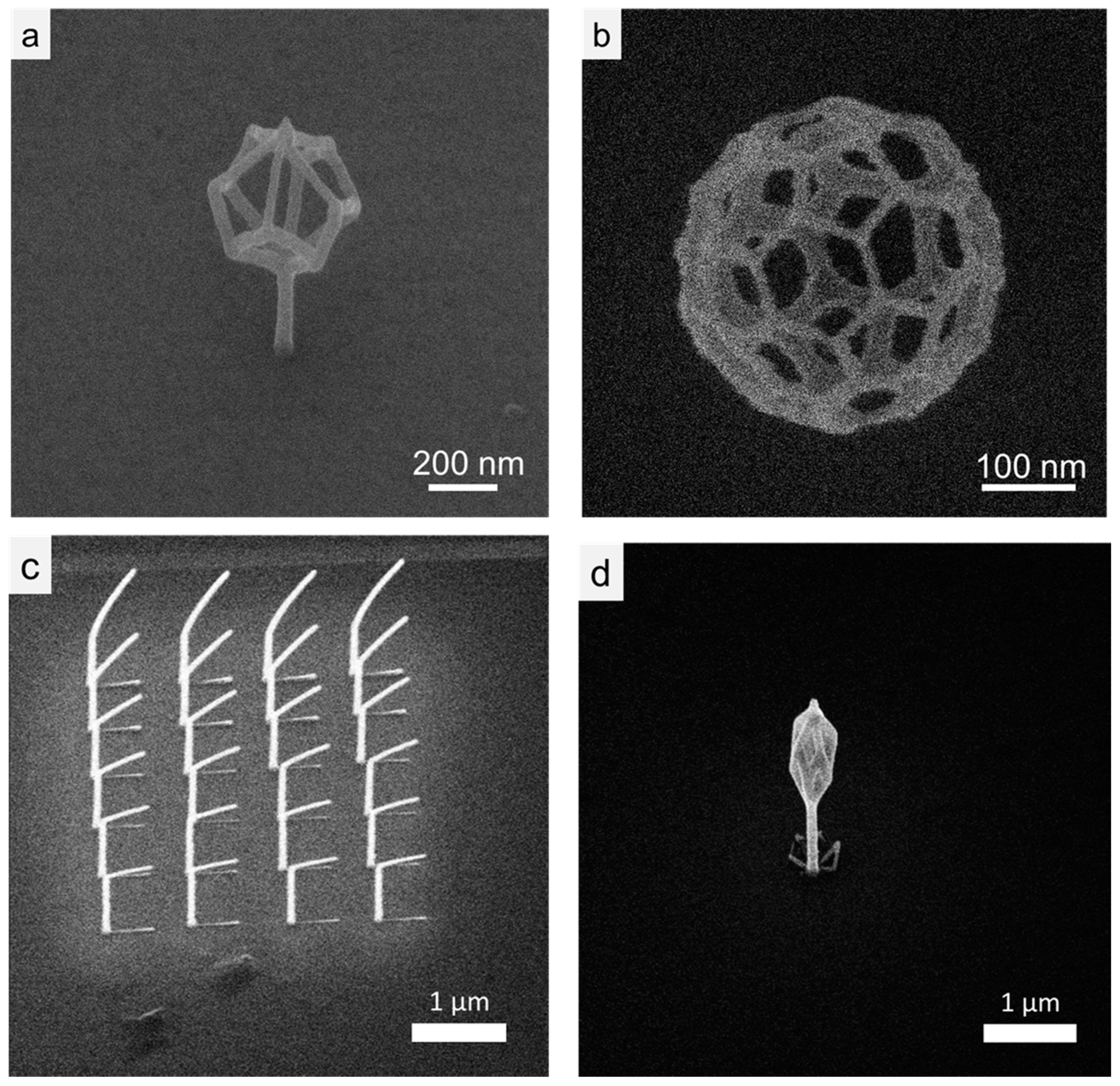 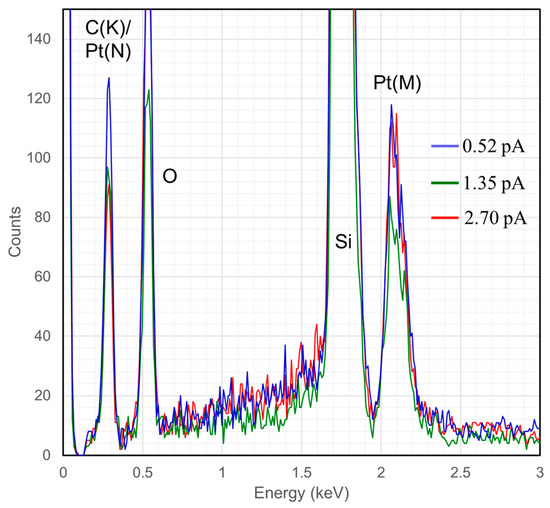