:
Single-molecule experiments provide unique insights into the mechanisms of biomolecular phenomena. However, because varying the concentration of a solute usually requires the exchange of the entire solution around the molecule, ligand-concentration-dependent measurements on the same molecule pose a challenge. In the present work we exploited the fact that a diffusion-dependent concentration gradient arises in a laminar-flow microfluidic device, which may be utilized for controlling the concentration of the ligand that the mechanically manipulated single molecule is exposed to. We tested this experimental approach by exposing a λ-phage dsDNA molecule, held with a double-trap optical tweezers instrument, to diffusionally-controlled concentrations of SYTOX Orange (SxO) and tetrakis(4-N-methyl)pyridyl-porphyrin (TMPYP). We demonstrate that the experimental design allows access to transient-kinetic, equilibrium and ligand-concentration-dependent mechanical experiments on the very same single molecule.
Keywords:
optical tweezers; concentration gradient; force spectroscopy; diffusion; microfluidics; fluorescence

Single-molecule methods, which have been evolving progressively in the past thirty years [1,2,3,4,5,6,7,8,9,10,11], give unprecedented insights into mechanistic details of molecular phenomena because they provide the distribution of parameters beyond ensemble averages, reveal stochastic processes such as fluorescence blinking [12], uncover trajectories of processes that evolve along parallel pathways such as protein folding [13,14,15], and allow the characterization of mechanical functions and properties such as molecular elasticity and motor-enzyme force generation [16,17,18]. One of the major tools in single-molecule mechanics is optical tweezers [1,19,20,21], which have been successfully employed in the investigation of DNA [22,23], RNA [24] and proteins [13,15]. An important challenge in single-molecule investigations is to provide a suitable, possibly controllable, chemical environment. Optical tweezers may be combined with microfluidics to provide discrete changes in the solution conditions [25,26]. However, exposing a single molecule to continuously controlled concentration of solutes remains a challenge.
In the present work, we utilize the concentration gradient that evolves in a parallel, laminar-flow multichannel microfluidic device, to expose a model DNA molecule to controlled concentrations of model intercalators SYTOX Orange (SxO) and a porphyrin derivative (TMPYP). Such DNA-binding small molecules have long been of interest due to their widespread applications. They are often used as therapeutic drugs [27,28,29,30,31,32] or as building blocks in creating functional assemblies [33,34,35,36,37]. They are most frequently used in molecular biology as DNA-labeling agents that can also perturb enzymatic reactions [38]. They bind to DNA in several modes: major- and minor-groove binding, electrostatic/allosteric binding and intercalation [39]. A molecule may bind with multiple modes depending on the nucleotide sequence [40,41], and each mode may have different equilibration times [2]. The characteristic time for association and dissociation may vary extensively, ranging from less than a second to hours [38]. Thus, for a precise characterization of the chemical reactions under mechanical loads it is necessary to control the experimental parameters of force, ligand concentration and exposure time simultaneously and precisely. We show that by positioning a pre-stretched single λ-phage dsDNA molecule at different locations within a diffusionally controlled spatial concentration gradient of the DNA-binding ligand, the parameters of the binding reaction can be accessed by following the concentration-dependent changes in DNA extension. Furthermore, force-driven structural changes in the very same DNA molecule can be measured at well-controlled ligand concentrations.

Single molecules of λ-phage DNA were mechanically manipulated by using a C-Trap dual trap optical tweezers system equipped with a multi-channel microfluidic flow-through sample chamber system and laser-scanning confocal fluorescence microscopy (Lumicks, Amsterdam, The Netherlands). The captured molecule was positioned at a distance ~100 µm away from the microchannel confluence to ensure a stable hydrodynamic environment. A typical solution flow rate of 1 mm/s was maintained throughout the experiments. Mechanical measurements were carried out in either constant stretch velocity (500 nm/s) or constant force (35 pN) modes. To measure fluorescence, a 532 nm YAG laser (Lumicks) was used for excitation. Fluorescence emission, across a wavelength range of 545–620 nm, was recorded with a photon-counting avalanche photodiode. We collected images either in the X–Y space, or kymograms in the molecular distance–time space.

2.3. Calibration of Concentration Gradient with Fluorescence

A diffusion-controlled ligand concentration gradient was generated between two, neighboring microfluidic channels, one of which contained high concentration of the DNA-binding molecule, and the other one containing buffer only. The shape of the concentration gradient depended on the limiting ligand concentrations (c0 = 0 and cs = 100 nmol/L), and the diffusion time (t) set by the flow velocity (v = 1000 µm/s) and the distance from the microchannel confluence (d ~ 100 µm) as t = d/v (see also Section 2.5 below) [43]. The actual spatial distribution of ligand concentration was characterized by imaging SxO fluorescence intensity along the gradient (i.e., in perpendicular to the flow direction) (Figure 1). The intensity profile (fluorescence intensity vs. distance) was calculated from the acquired image with the ImageJ software (version 1.52, public domain).

Considering that the investigated ligands (SxO and TMPYP) intercalate into DNA and hence affect DNA’s contour length [38,40], the ligand concentration gradient may be mechanically mapped by moving a captured DNA along the gradient direction. We used two different methods: in the first, a single λ-phage dsDNA molecule, pulled taut with a constant force of 35 pN, was moved with constant velocity (18.5 µm/s) along the gradient (Figure 1). The molecular axis was parallel with the flow direction. Normalized length change was plotted against the distance traveled. In the second method, the dsDNA molecule was rapidly moved (with a speed of 500 µm/s) in discrete, 38 µm steps along the gradient. We plotted dsDNA length as a function of time. Whereas the first approach mimics an equilibrium experiment, the second approach is a transient kinetic one.

The evolution of the concentration gradient at the border between the neighboring microchannels is dictated by diffusion according to Fick’s second law, a one-dimensional solution of which is: where c is diffusant concentration, is the maximum, initial concentration in the dye channel, D is the diffusion coefficient, t is time, and x is distance along the one-dimensional diffusion coordinate (in perpendicular to the flow direction) so that x is 0 at the microchannel border and positive towards the dye channel. The parameter erf is an error function in the form of an integral of a Gaussian [44]. Considering that according to Einstein’s theory of diffusion the root-mean-square displacement of Brownian particle is , the term in Equation (1) may be replaced with [45]. By removing D from the equation, we neglect the role of the diffusion coefficient, but we note that differences in the diffusibility of the different ligands alter the final shape of their respective concentration gradients. The boundary conditions of Equation (1) are such that the concentration gradients at infinite distances away from the microchannel border in either direction are 0. The initial conditions of Equation (1) are such that c(x,0) is at and at [44]. We used Equation (1) to fit the fluorescence intensity vs. distance profile across the microchannel border.

In conclusion, in the present work we successfully employed diffusionally generated concentration gradients of DNA-binding ligands for measuring concentration-dependent effects on single-molecule mechanics. The combination of the double-trap optical tweezers with fluorescence imaging and carefully designed microfluidic environment allowed for rapid and efficient measurement of the mechanical properties of DNA exposed to different ligand concentrations of intercalators and provided access to numerous equilibrium and kinetic parameters of the ligand-DNA interaction. Our initial measurements on the comparison of SxO and TMPYP suggested that the binding of TMPYP to DNA is likely to follow mechanisms that are different from or additional to those of SxO. The major advantage of the use of the concentration gradient is that uncertainties of ligand concentration adjustment caused by the adsorption and desorption of cyanine dyes to and from the surfaces of the microfluidic device [38] can be alleviated. The concentration gradient may also be employed for investigating the effects of ligands (e.g., ions, substrates, etc.) on proteins. Although the small size of usual proteins may pose experimental challenge, large filamentous proteins (e.g., titin [50]) or proteins captured with DNA handles [51,52,53,54] may be investigated directly. Considering the emerging significance of single-molecule mechanics in understanding structural and functional detail, the addition of precisely adjusted ligand concentration gradients, as demonstrated here, may provide further access to understanding the exact mechanisms behind biomolecular phenomena. 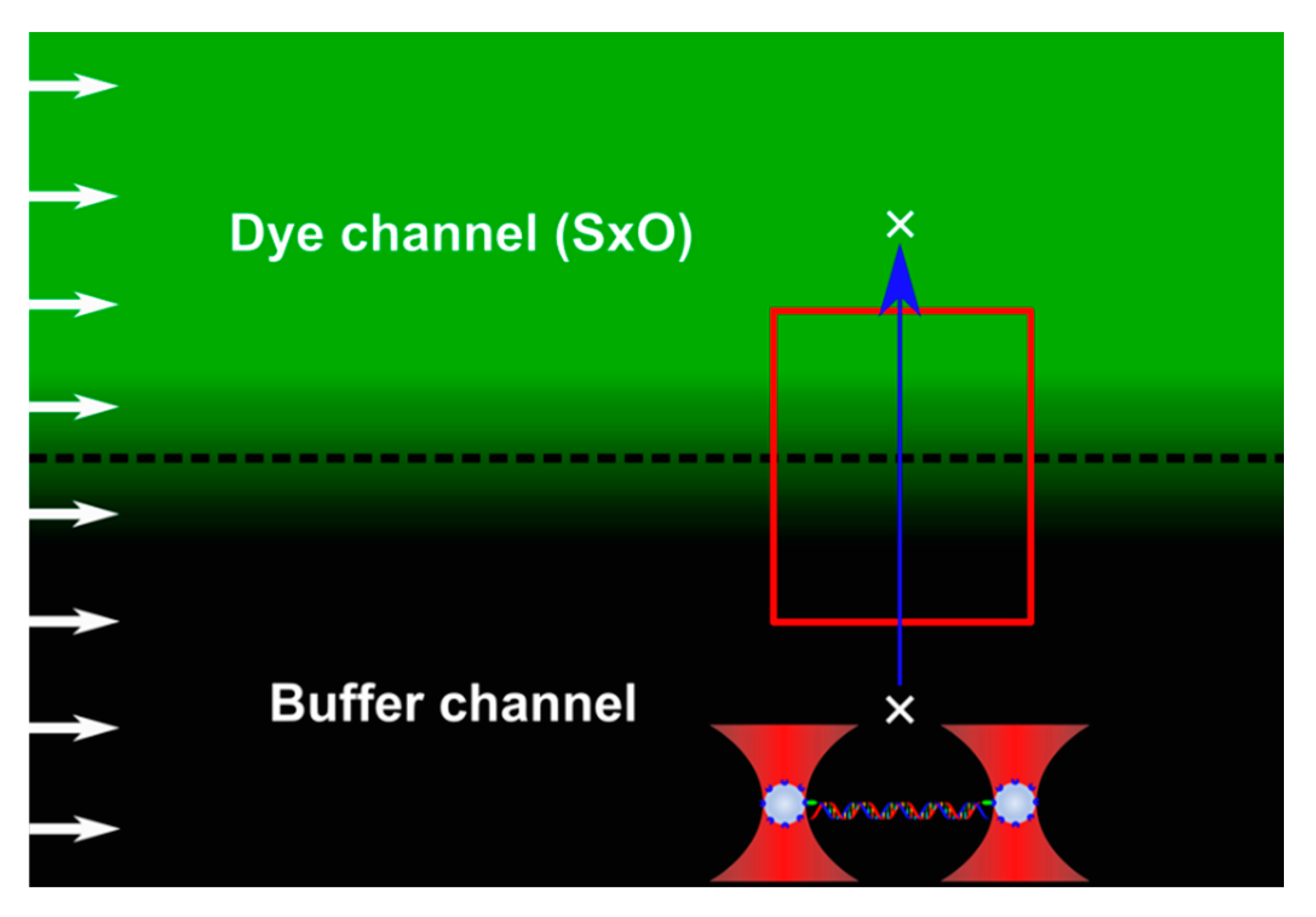 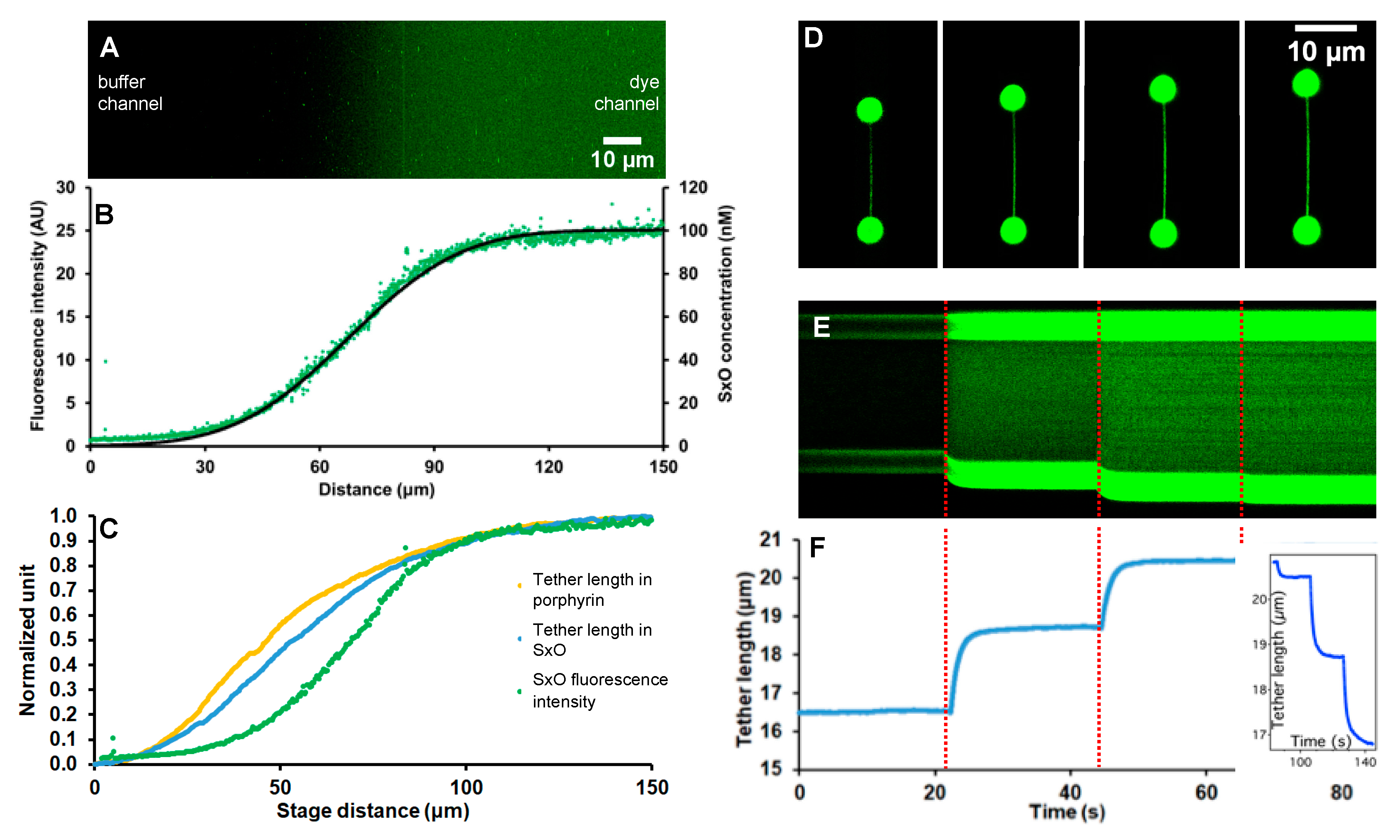 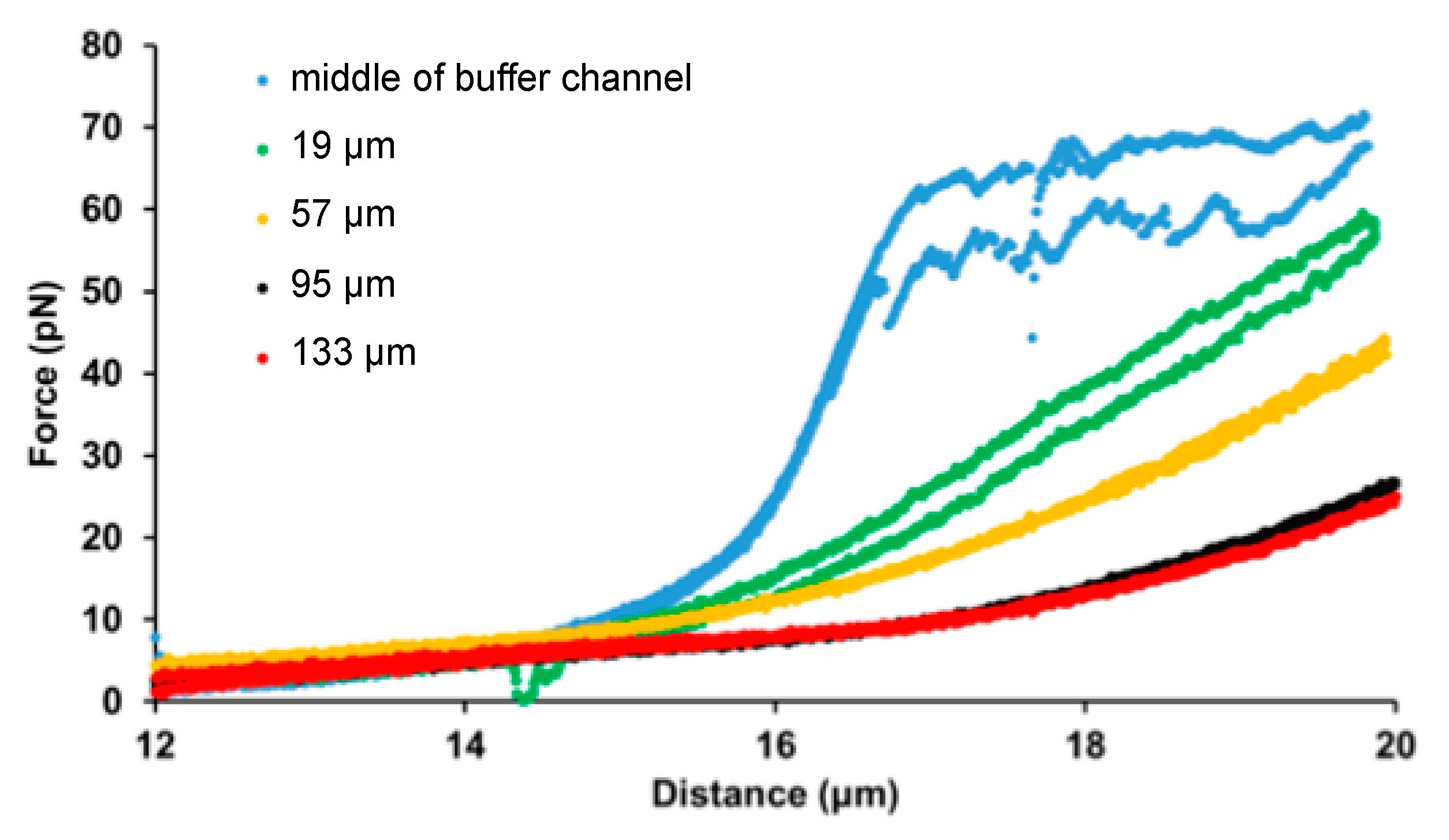