:
Tactile sensing, particularly the detection of object slippage, is required for skillful object handling by robotic grippers. The real-time measurement and identification of the dynamic shear forces that result from slippage events are crucial for slip detection and effective object interaction. In this study, a ferroelectric polymer-based printed soft sensor for object slippage detection was developed and fabricated by screen printing. The proposed sensor demonstrated a sensitivity of 8.2 μC·cm−2 and was responsive to shear forces applied in both the parallel and perpendicular directions. An amplifier circuit, based on a printed organic thin-film transistor, was applied and achieved a high sensitivity of 0.1 cm2/V·s. Therefore, this study experimentally demonstrates the effectiveness of the proposed printable high-sensitivity tactile sensor, which could serve as part of a wearable robotic e-skin. The sensor could facilitate the production of a system to detect and prevent the slippage of objects from robotic grippers.
Keywords:
wearable sensing; soft sensor; robotics; shear force; dynamic friction coefficient

Currently, industrial robots provide automated systems that can grasp and manipulate objects and serve in fields such as electronic device manufacturing and food industries [1,2]. Robots with soft sensors for tactile sensing have recently attracted considerable research attention. Functionalized flexible sensors that enable sensing, such as touch, temperature, and vision [3,4,5,6,7,8,9,10] in robot systems, have been applied to enhance automated systems [11,12,13,14,15]. Moreover, because robots with such sensors can be applied to artificial intelligence and big data, their usefulness has been expanded [16,17]. In particular, the detection of object slippage from robotic grippers by using the fabricated soft sensor is an important issue for robotic system control.
Piezoelectric polymer-based tactile slippage detection sensors can measure the shear force generated by a slippage event. Recent studies have demonstrated the use of fabricated ferroelectric-material-based sensors for robotic e-skin [18,19,20]. Soft sensors can be mounted on rigid- and soft-robot for making a sensing system such a biomimetic tactile sensor. To date, however, no studies have reported on the use of printed soft sensors to sense the shear forces experienced by robotic grippers. The arrangement and types of materials for the fabrication of these high-performance devices have remained a challenging task [21]. Therefore, it is necessary to improve the sensitivity of ferroelectric materials for shear force detection. Further, a printing process for device fabrication would be superior to current sensor manufacturing systems because it would enable the use of highly efficient materials and the production of low-cost devices. Recently, S. Pyo et al. reported a Carbon nanotube (CNT) -polymer composite based tactile sensor. In this paper, they developed a flexible three-axis tactile sensor by screen printing a system with a carbon nanotube-polymer materials composite. The CNT-based sensor had an arrayed-pattern and can measure an applied stress by changing resistance [22]. In addition, this sensor can be fabricated by screen printing, which has been widely used to fabricate various micropatterns for its cost effectiveness. J. Hwang et al., fabricated a pressure sensor using piezoresistive composites by multi-walled carbon nanotubes and polydimethylsiloxane as a polymer matrix. This can detect an extremely small pressure range which is required for finger-sensing [23]. On the other hand, the piezoelectric polymer-based sensor does not require an array-pattern. Moreover, it can detect a shear force that is changing in minute time.
In this study, a ferroelectric polymer-based printed soft sensor was fabricated to sense and measure the dynamic shear forces generated during a slippage event. The proposed sensor achieved a sensitivity of 8.2 μC·cm−2, and a robotic gripper that included the sensor demonstrated the ability to detect shear force. Moreover, an amplifier circuit using an organic thin-film transistor (OTFT), which was also fabricated using a printing process, was applied and achieved a high sensitivity of 0.1 cm2/V·s. The results demonstrate the feasibility of producing a robotic gripper that includes a high-sensitivity electronic skin system for detecting slippage events.

A schematic overview of the fabricated soft shear sensor is shown in Figure 1a,b. The sensor was fabricated on a 50 μm thick (Q65HA, DuPont) poly(ethylene naphthalate) (PEN) film substrate and affixed to a glass carrier. A cross-linkable poly(4-vinyl-phenol) (PVP) (436224, Sigma-Aldrich) solution consisting of a mixture of PVP and melamine resin (418560, Sigma-Aldrich) was spin-coated onto the PEN film as the planarization layer using 1-methoxy-2-propyl acetate (01948-00, Kanto Chemicals) as the solvent. An 800 nm thick lower electrode made from poly(3,4-ethylenedioxythiophene) polystyrene sulfonate (PEDOT:PSS) (Clevios SV4 STAB, Heraeus) was screen printed onto the planarization layer and annealed at 150  °C for 30 min [24]. Further, a 8000 nm thick layer of poly(vinylidene fluoride-co-trifluoroethylene) (P(VDF-TrFE)) (FC-25, Piezotech, VDF:TrFE molar ratio of 75:25) dissolved in trimethylphosphate (TMP) at a concentration of 12 wt.% was formed by blade printing and annealed at 145  °C for 1 h. The upper sensor electrode consisted of screen printed PEDOT:PSS and was annealed at 145  °C for 30  min. Finally, several passivation layers consisting of PEN, polyimide (PI), and polyvinyl chloride (PVC) were placed onto the device. The total weight of our sensor was just under 1.0 g. The chemical structures of the P(VDF-TrFE) and the components of the passivation layers are shown in Figure 1c.

All the sensor characteristics were measured under atmospheric conditions using an oscilloscope (MDO3000, Tektronix) and a waveform generator (AFG3101C, Tektronix). The polarization–electric field (P–E) loop of the sensor was estimated using the Sawyer–Tower method [25]. The sensor piezoelectricity was measured using an electric slider testing machine (EASM4NYD010AZAC, Oriental Motor). X-ray diffraction (XRD) (SmartLab, Rigaku) measurements of the P(VDF-TrFE) layer were performed to assess crystallinity and analyze the crystal structures. The surface and interface morphologies of the P(VDF-TrFE) layer were observed using an atomic force microscope (AFM) (5500, Agilent). Fourier transform infrared (FT-IR) measurements were performed at a spectral resolution of 2 cm using an FT-IR spectrometer (Nicolet iS5, Thermo Scientific). The dynamic friction coefficient of the devices was evaluated using a dynamic friction measuring instrument (µV 1000, Trinity Lab).

In this study, a soft sensor comprising a ferroelectric polymer and several passivation layers was developed and fabricated to sense object slippage. P(VDF-TrFE) served as the ferroelectric layer, and PEN, PI, and PVC films were the passivation layers. This ferroelectric-based sensor demonstrated good ferroelectric characteristics, providing ferroelectricity of 8.2 μC·cm−2 after annealing at 140 °C. The device was proven to be practical for detecting object slippage events, based on its reactions to parallel and perpendicular forces. Moreover, the OTFT devices were demonstrated to be practical amplifiers, by demonstrating stable electric performance and a field-effect mobility of 0.1 cm2/V·s. From the results, the use of OTFTs as amplifier components for the soft sensors was demonstrated to be feasible. Moreover, we showed the potential application of OTFT as an amplifier circuit for sensor devices. The work in this study could serve as a foundation for the development of effective slippage detection sensors for application in robotic gripper devices. This study tested only one proposed device and fabrication technique. Future work could provide comparative evaluations to ensure the highest performance and greatest cost-effectiveness.

The following are available online at https://www.mdpi.com/2072-666X/11/10/927/s1, Figure S1: A mechanical fatigue of our sensor as a normalized voltage during long-term cycling for 3500 cycles. Figure S2: Shear force occurring of shear force in testing of Figure 4a,d. Figure S3: A connection system with the sensor and OTFT as the amplifier circuit.

We thank the staff of the Research Center for Organic Electronics (ROEL) for their expertise in generating and processing the monitoring data. This study was partially supported by the Japan Science and Technology Agency (JST), Hitachi Metals-Materials Science Foundation. This work was also supported by the Cabinet Office, Cross-ministerial Strategic Innovation Promotion Program, and “An intelligent knowledge processing infrastructure, integrating physical and virtual domains” project funded by NEDO. The authors would like to thank Editage (www.editage.jp) for the English language review and C. Shepherd for his technical support and helpful discussions. 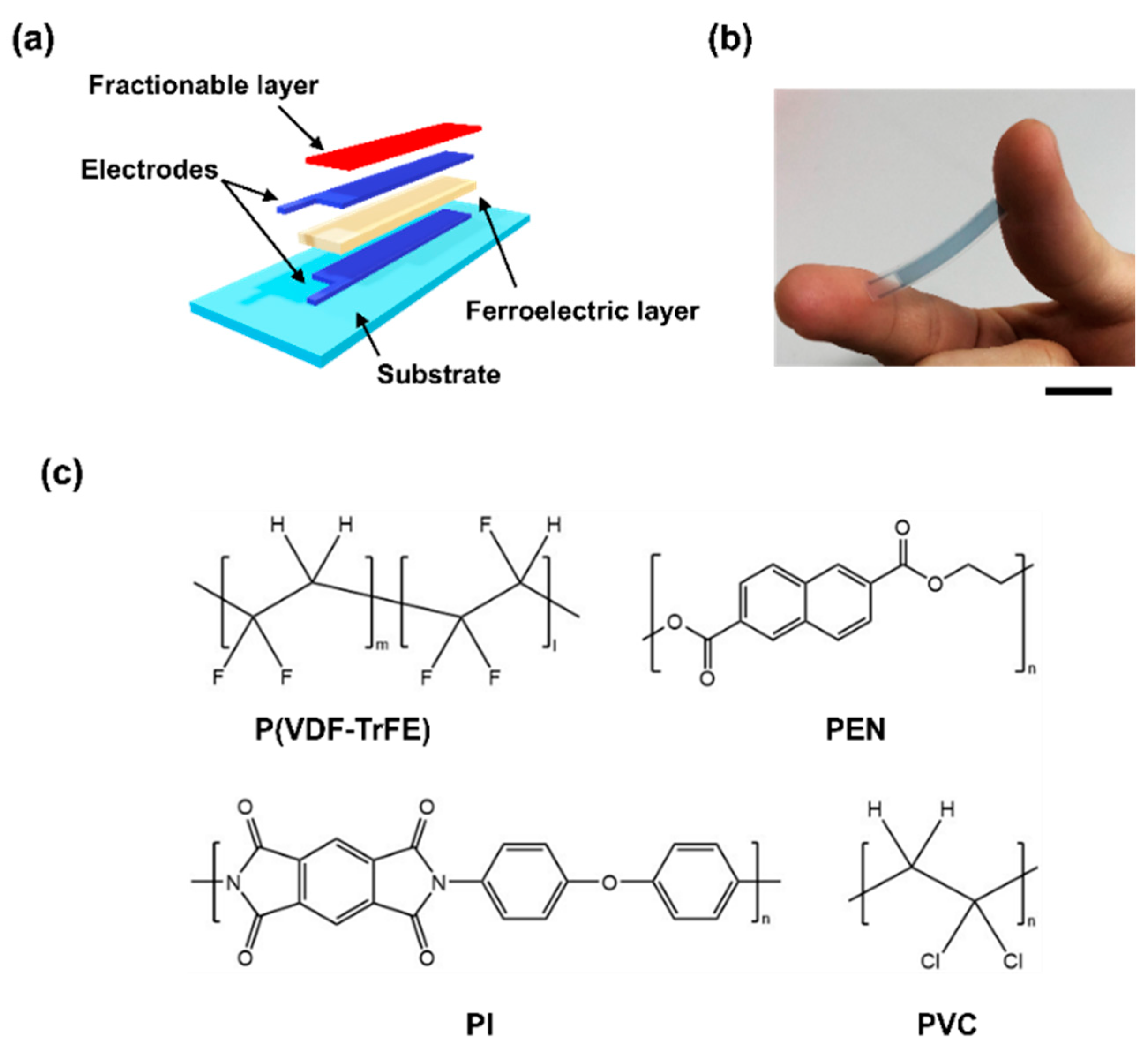