Acoustic manipulation is a material-independent method having a broad range of biomedical and material applications [1,2,3,4]. Acoustic manipulation can be achieved using techniques such as contact force [5,6,7], streaming [8,9,10], and radiation force [11,12,13]. The latter gives rise to acoustic levitation that can suspend objects in the mid-air and has attracted wide interests. A typical acoustic levitator consists of an emitting surface and a reflector or a pair of opposing emitting surfaces in order to form a pressure standing wave. A levitator with a single-sided emitter has also been developed [14,15]. The primary acoustic radiation force, arising from the nonlinear property of the acoustic pressure field, will move an object heavier than air toward the pressure node. If the force is strong enough to overcome the gravitational force, the object will be levitated and trapped around the pressure node, also referred to as the acoustic trap.
Acoustic levitation employs either a static-field or a dynamic-field (see a recent review by Drinkwater [16]). Static-field levitation can suspend objects in fixed locations [2,17], while dynamic-field levitation allows contactless transport in one [18,19,20], two [13,21], and three dimensions [14,22,23]. Contactless transport by means of acoustic levitation can be achieved in various ways. Bjelobrk [18] employed a single transducer and controlled the location pressure node by varying the distance between emitting surface and reflector. Koyama [19], Thomas [20], and Kashima [21], in their independent setups, varied the flexural mode of the vibrating plate by controlling the phase difference of the two transducers or the two pairs of transducers. Franklin [23] used a 3D-printed Fresnel lens and a two-element disk to produce an acoustic trap, and employed a translation stage to move the whole transducer system and accordingly the acoustic trap. Foresti [13] used an array of transducers under a reflector and applied spatiotemporal amplitude modulation on the transducer array to create an acoustic trap at a desired position. Ochiai [22] used opposing ultrasonic phased arrays to generate a pressure node at an arbitrary position, and moved it in 3D by reprogramming the time delay in each individual transducer. Marzo [14] introduced the holographic acoustic elements framework for an ultrasonic phased array that allowed the generation of multiple acoustic traps in the positions according to the holographic focusing element, even with a single-sided array. In summary, the dexterity of dynamic-field levitation requires an extra manipulation tool [18,23] or multiple individually-controlled transducers [13,14,19,20,21,22].
In this paper, we report a simple acoustic levitator that can manipulate objects in two dimensions using just a single transducer and a reflector, without any moving element except the transducer. We firstly identified the levitation position (or acoustic trap) for different actuation signal frequencies. Then, we adopted a frequency-switching method to generate new levitation positions. Finally, we demonstrated the capability of our single transducer levitator to move an object following 2D trajectories. To the best of our knowledge, this is the first work showing a single transducer acoustic levitator able to manipulate an object in 2D trajectory by solely controlling the actuation signal.

The acoustic levitator experiment setup is shown in Figure 1. The main components were a vibrating plate as the transducer and a flat reflector. The plate (silicon, 50 mm × 50 mm × 525 μm) was centrally-actuated to generate the flexural vibration mode on its surface. The actuator was a piezoelectric stack actuator (Pst150/2x3/5, Piezomechanik GmbH, Munich, Germany) and was glued using cyanoacrylate adhesive on to center of the surface of plate. The actuator was driven by a signal composed in a PC using MATLAB (MathWorks, Natick, MA, USA), converted to analog signal by a digital-to-analog board (NI USB-6341, National Instruments, Austin, TX, USA), and amplified by a linear amplifier (EPA-104, Piezo Systems, Woburn, MA, USA). A flat transparent reflector (polycarbonate, 10 mm thickness) was mounted above the transducer. The vertical position of the reflector was adjustable using a manual linear stage (M-423, Newport, Irvine, CA, USA). The plate and the actuator were mounted on a dual-axis goniometer (GN2/M, Thorlabs, Newton, NJ, USA) to set the tilting angle between plate and reflector. The levitated object and plate were imaged by a camera (IGV-B1621C-KC000, ImperX, Boca Raton, FL, USA, with Infinity/InfiniMite Alpha lens) mounted above the plate and reflector.
The levitated objects in this paper were a cluster of microspheres (092DET100d25, AkzoNobel, Amsterdam, The Netherlands), where the size of each individual microsphere was 80–120 µm and the density was 25 ± 3 kg/m3. The size of the cluster in our experiment was about 1 mm.

We employed a square plate and a reflector to simultaneously levitate and manipulate particles in ambient air environment following a 2D trajectory. We spread the microspheres, as levitated objects, on the top of the surface of the plate. The plate was then actuated to generate standing sound waves between plate-reflector, and eventually levitate and trap the microspheres. The microspheres self-assembled and formed a cluster, about 1 mm in size. We examined multiple tilting angles, and observed that the three angles, 0°50′, 1°0′, and 2°0′, provided significant spread of particle positions when the frequency varied. Figure 5a shows the levitation positions of a cluster of microspheres at three frequencies and three tilting angles. Nodal lines were obtained by processing the images of Chladni figures, Figure 5b–d, from the sand grains experiment using the morphological shrink algorithm. It is apparent that the levitation position do not necessarily displace monotonically in the x-direction, nor in the y-direction, as the frequency increased. The levitation position to frequency relation are to be obtained experimentally.
Among the three angles, the angle 2°0′ provided a spread that minimized the difference in Euclidean distance between each pair of particle positions, or maximized the spread area. In the following study, we fixed the tilting angle at 2°0′. The distance between the center of the plate and the reflector surface was 5.4 mm, which corresponds to about a half-wavelength of the sound generated at the excitation frequency. As the levitator creates a rather complicated acoustic field across the plate, we focused our study to the 3 mm × 3 mm region of interest around the center of the plate in this paper.
The relation between levitation positions and frequencies is shown in Figure 5e. We scanned the frequency from 33.8 to 34.7 kHz, with a step size of 0.1 kHz. We provided a fixed signal amplitude of 24 V except for 33.9 kHz, for which we provided 30 V to improve levitation stability. Seven frequencies, namely 33.8, 33.9, 34.3, 34.4, 34.5, 34.6, and 34.7 kHz, led to stable levitation positions, while other frequencies did not lead to stable levitation and were discarded. For the seven frequencies, the levitation positions corresponded to the frequencies spread within the region of interest. However, the connecting lines between adjacent levitation positions on all levitation positions formed a U-shaped curve. Therefore, it was challenging to obtain levitation positions beyond the curve by using finer steps of frequencies (e.g., within the area enclosed by the U-shaped curve).

Using the saved composite signal and position relation, we can levitate and manipulate a cluster of microspheres in predefined trajectories. We first designed a trajectory consisting of waypoints, then matched each waypoint to the closest levitation position we had collected, resulting in a sequence of composite signals. We then played the sequence of signals to levitate and move the microspheres to follow the designed trajectory in an open-loop control. In Figure 8a, we demonstrate five sequential trajectories that resemble letters AALTO, where the time duration of each step is 50 ms. The motion of the self-assembled cluster of microspheres was recorded using a high-speed video camera (Phantom v2012, Wayne, NJ, USA) with a macro lens (Canon MP-E 65 mm f/2.8 1-5X Macro Photo, Tokyo, Japan) at the frame rate of 1000 FPS. The focal plane is set to be between the plate and reflector. Since the cluster is self-assembled, the cluster adapts its size to the levitation positions where some particles would leave the cluster if the size of a levitation position is smaller than the size of the cluster (see Supplementary Video S1).
We repeated the experiment three times and quantified the repeatability by calculating the position error as deviation from the mean trajectory for all repetitions. Figure 8b shows the trajectories in all repetitions and Figure 8c shows the corresponding position error histogram. The mean value of all position errors was 155 ± 84 µm. The side length of the trajectory was about 2 mm, hence the mean position error was about 7% of the trajectory side length. We attribute the spatial shift in the trajectories (Figure 8b) to temperature variation. The temperature variation changes the speed and wavelength of sound, leading to the spatial shift of the levitation position. We also calculated the speed of the cluster for each trajectory in all repetitions, where the speed is calculated over three consecutive frames. Figure 8d shows the distribution of the speed plotted on mean trajectories. It is apparent that the cluster moves between levitation positions at a higher speed and settles around the levitation position at a lower speed, and the maximum speed is 182 mm/s.

In summary, we have demonstrated a simple single-transducer acoustic levitator capable of manipulating objects in a two-dimensional trajectory. The levitator utilizes the feature that the levitation position changes at different vibration frequencies when the plate and the reflector have a small angle. The spread of the levitation positions depends on the tilting angle between the plate and the reflector. Tilting angle is chosen to balance between the spread of levitation positions and the one-to-one mapping of frequency to distinct levitation positions. The reachable area can be increased by composite signals of two frequencies using frequency-switching.
In the demonstration experiment, the levitated object follows the 2D predefined trajectories. The object reaches a speed up to 182 mm/s and the average deviation from mean trajectory is 155 ± 84 µm. It is possible to reduce the deviation by using a controlled environment to minimize air temperature variation.
Our method opens the path to a new design of acoustic levitation systems. Unlike other acoustic levitators that require multiple independently-controlled transducers to achieve 2D manipulation, our method is extremely simple requiring only a single transducer. Despite its simplicity, it allows manipulation of a cluster of micro objects in predefined 2D trajectories. We envision that the proposed method has great potential for simplification of micro-manipulation of levitated objects. This can benefit numerous applications in micro-assembly [11,25], material characterization [26,27], and transport and diagnosis of biological samples [28,29,30].

This work was supported by LPDP Scholarship of Indonesia, Academy of Finland (grant 296250), and Aalto doctoral school of Electrical Engineering. The authors acknowledge Isabel Díez for her support in preparing initial material to be levitated and Zoran Cenev for his support on tools and mechanical design of the apparatus. 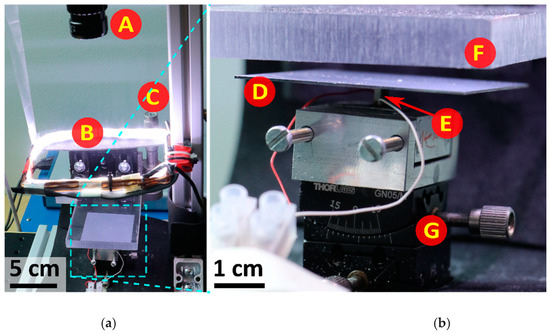 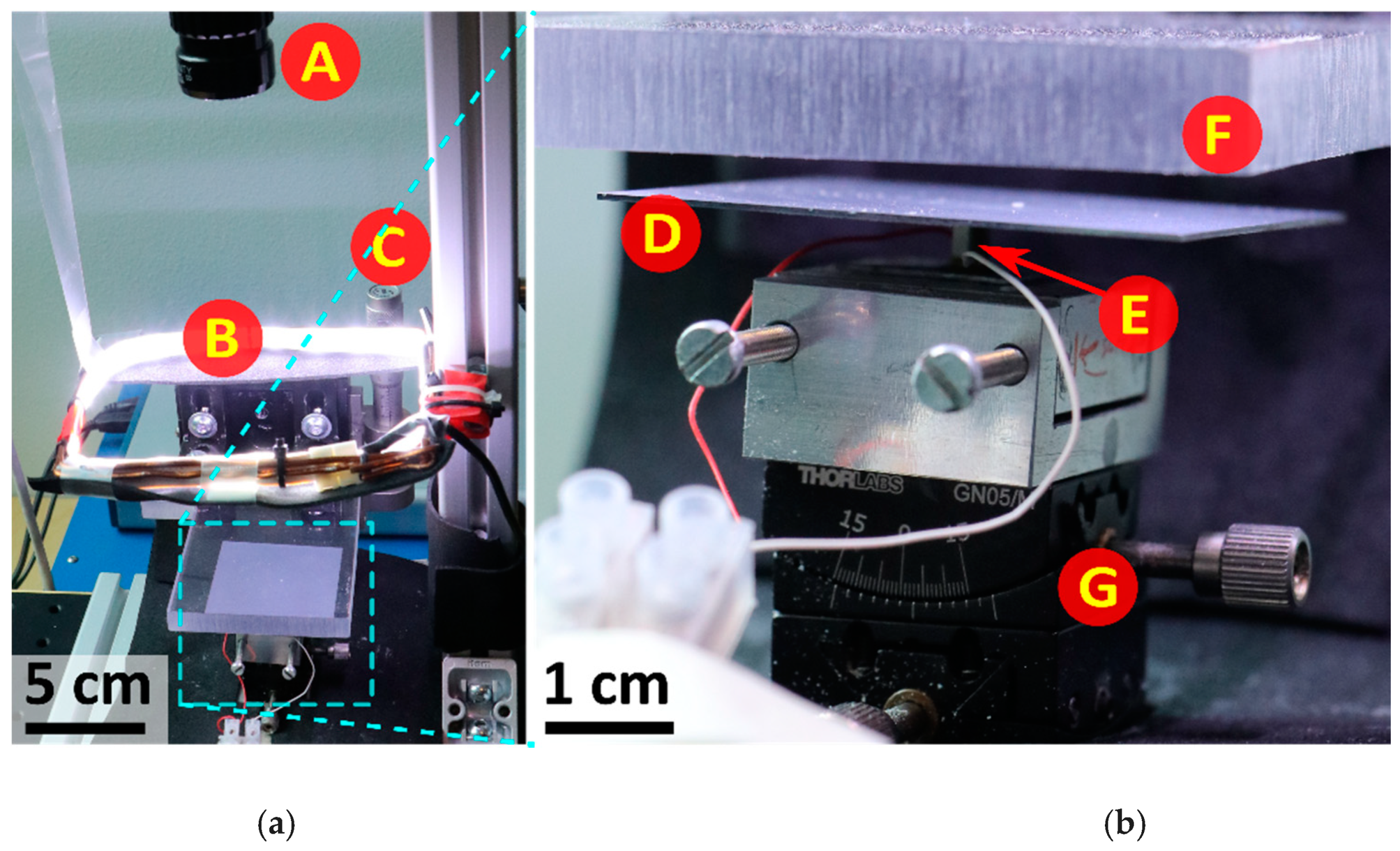 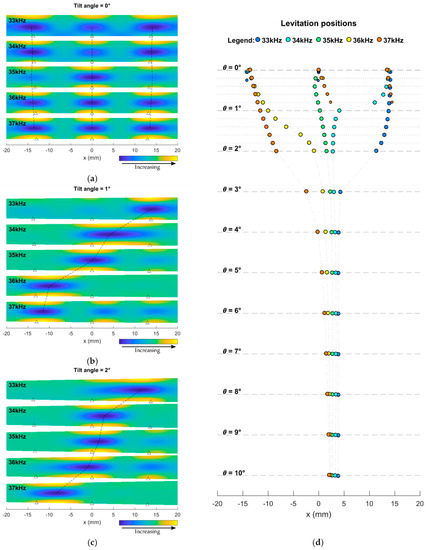 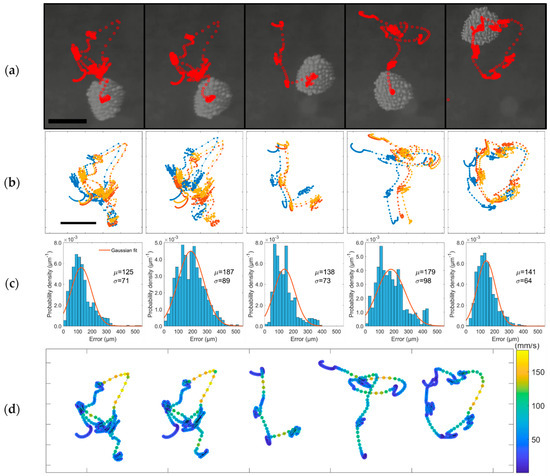