Along with the great performance in diagnosing cardiovascular diseases, current stethoscopes perform unsatisfactorily in controlling undesired noise caused by the surrounding environment and detector operation. In this case, a low-noise-level heart sound system was designed to inhibit noise by a novel thorax-integration head with a flexible electric film. A hardware filter bank and wavelet-based algorithm were employed to enhance the recorded heart sounds from the system. In the experiments, we used the new system and the 3M™ Littmann® Model 3200 Electronic Stethoscope separately to record heart sounds in different noisy environments. The results illustrated that the average estimated noise ratio represented 21.26% and the lowest represented only 12.47% compared to the 3M stethoscope, demonstrating the better performance in denoising ability of this system than state-of-the-art equipment. Furthermore, based on the heart sounds recorded with this system, some diagnosis results were achieved from an expert and compared to echocardiography reports. The diagnoses were correct except for two uncertain items, which greatly confirmed the fact that this system could reserve complete pathological information in the end. View Full-Text
Keywords: flexible electric film; wavelet denoising; digital stethoscope flexible electric film; wavelet denoising; digital stethoscope
►▼ Show Figures 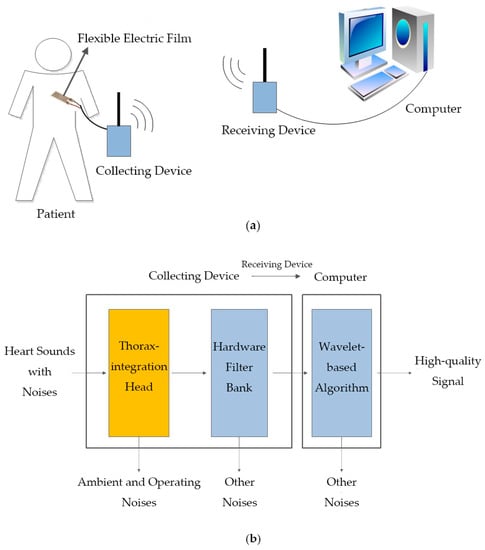