Design, Analysis, and Experiment on a Novel Stick-Slip Piezoelectric Actuator with a Lever Mechanism
Previous Article in Special Issue

The naked-eye three-dimensional (3D) display technology without wearing equipment is an inevitable future development trend. In this paper, the design and fabrication of a flexible naked-eye 3D display film element based on a microstructure have been proposed to achieve a high-resolution 3D display effect. The film element consists of two sets of key microstructures, namely, a microimage array (MIA) and microlens array (MLA). By establishing the basic structural model, the matching relationship between the two groups of microstructures has been studied. Based on 3D graphics software, a 3D object information acquisition model has been proposed to achieve a high-resolution MIA from different viewpoints, recording without crosstalk. In addition, lithography technology has been used to realize the fabrications of the MLA and MIA. Based on nanoimprint technology, a complete integration technology on a flexible film substrate has been formed. Finally, a flexible 3D display film element has been fabricated, which has a light weight and can be curled. View Full-Text
Keywords: naked-eye 3D; microstructure; flexible; film; fabrication naked-eye 3D; microstructure; flexible; film; fabrication
►▼ Show Figures 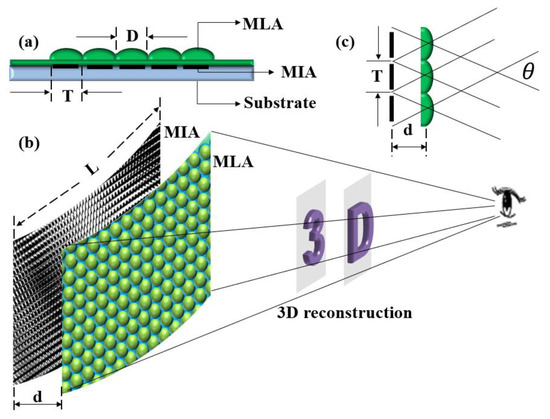