A Study on Parametric Amplification in a Piezoelectric MEMS Device

In various applications, damping from the surrounding fluid severely degrades the performance of micro-electro-mechanical systems (MEMS). In this paper, mechanical amplification through parametric resonance was investigated in a piezoelectrically actuated MEMS to overcome the effects of damping. The device was fabricated using the PiezoMUMPS process, which is based on a Silicon-on-Insulator (SOI) process with an additional aluminum nitride (AlN) layer. Here, a double-clamped cantilever beam with a concentrated mass at the center was excited at its first resonance mode (out-of-plane motion) in air and at atmospheric conditions. A parametric signal modulating the stiffness of the beam was added at twice the frequency of the excitation signal, which was swept through the resonance frequency of the mode. The displacement at the center of the device was detected optically. A four-fold increase in the quality-factor, Q, of the resonator was obtained at the highest values in amplitude used for the parametric excitation. The spring modulation constant was obtained from the effective quality-factor, , versus parametric excitation voltage curve. This study demonstrates that through these methods, significant improvements in performance of MEMS in fluids can be obtained, even for devices fabricated using standard commercial processes. View Full-Text
Keywords: MEMS; parametric resonance; nonlinear systems MEMS; parametric resonance; nonlinear systems
►▼ Show Figures 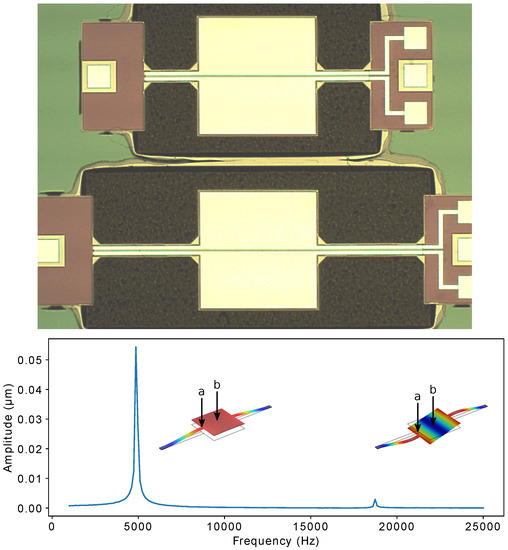