Insights into the Mechanisms Involved in Strong Hemorrhage and Dermonecrosis Induced by Atroxlysin-Ia, a PI-Class Snake Venom Metalloproteinase
Previous Article in Special Issue

Based on prior observations that deoxynivalenol (DON) toxicity is sex-dependent, we compared metabolism and clearance of this toxin in male and female mice. Following intraperitoneal challenge with 1 mg/kg bw DON, the dose used in the aforementioned toxicity study, ELISA and LC–MS/MS analyses revealed that by 24 h, most DON and DON metabolites were excreted via urine (49–86%) as compared to feces (1.2–8.3%). Females excreted DON and its principal metabolites (DON-3-, DON-8,15 hemiketal-8-, and iso-DON-8-glucuronides) in urine more rapidly than males. Metabolite concentrations were typically 2 to 4 times higher in the livers and kidneys of males than females from 1 to 4 h after dosing. Trace levels of DON-3-sulfate and DON-15-sulfate were found in urine, liver and kidneys from females but not males. Fecal excretion of DON and DON sulfonates was approximately 2-fold greater in males than females. Finally, decreased DON clearance rates in males could not be explained by glucuronidation activities in liver and kidney microsomes. To summarize, increased sensitivity of male mice to DON’s toxic effects as compared to females corresponds to decreased ability to clear the toxin via urine but did not appear to result from differences in toxin metabolism. View Full-Text
Keywords: trichothecene; mycotoxin; metabolism; sex dependence trichothecene; mycotoxin; metabolism; sex dependence
►▼ Show Figures 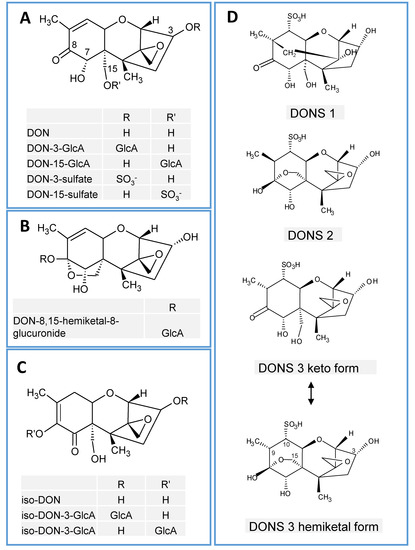 
Pestka JJ, Clark ES, Schwartz-Zimmermann HE, Berthiller F. Sex Is a Determinant for Deoxynivalenol Metabolism and Elimination in the Mouse. Toxins. 2017; 9(8):240.