Mycotoxins produced by Fusarium plant pathogen species have harmful effects on humans and livestock by natural contamination in food and feed. Zearalenone, one of the well-known Fusarium mycotoxins, causes hyperestrogenism and toxicosis resulting in reproductive dysfunction in animals. This study investigated the occurrence of zearalenone in feedstuffs (compound feeds, feed ingredients) between 2009 and 2016 in South Korea to obtain information on zearalenone contamination in feeds for management. A total of 653 animal feed samples (494 compound feeds, 159 feed ingredients) produced domestically were sampled five times from 2009 to 2016 (2009, 2010, 2012, 2014, and 2016) from feed factories in South Korea. The levels of zearalenone were analyzed every year by high-performance liquid chromatography (HPLC) after pretreatment with an immunoaffinity column showing limit of detection (LOD) and limit of quantification (LOQ) of 0.1–3 μg/kg and 0.3–8 μg/kg, respectively. Four feed samples out of 494 compound feeds exceeded the EU and South Korea commission regulations over the eight-year test period, and no feed ingredients exceeded the guidelines. View Full-Text
Keywords: mycotoxin; zearalenone; feedstuffs mycotoxin; zearalenone; feedstuffs
►▼ Show Figures 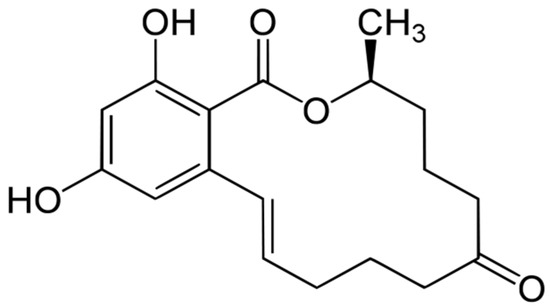