The Effect of Co-Administration of Death Camas (Zigadenus spp.) and Low Larkspur (Delphinium spp.) in Cattle

Different group of alkaloids are produced during the symbiotic development of fungal endophytes of the genus Epichloë in grass. The structure and toxicity of the compounds vary considerably in mammalian herbivores and in crop pests. Alkaloids of the indole-diterpene group, of which lolitrem B is the most toxic, were first characterized in endophyte-infected perennial ryegrass, and are responsible for “ryegrass staggers.” Ergot alkaloids, of which ergovaline is the most abundant ergopeptide alkaloid produced, are also found in ryegrass, but generally at a lower rate than lolitrem B. Other alkaloids such as lolines and peramine are toxic for crop pests but have weak toxicological properties in mammals. The purpose of this review is to present indole-diterpene alkaloids produced in endophyte infected ryegrass from the first characterization of ryegrass staggers to the determination of the toxicokinetics of lolitrem B and of their mechanism of action in mammals, focusing on the different factors that could explain the worldwide distribution of the disease. Other indole diterpene alkaloids than lolitrem B that can be found in Epichloë infected ryegrass, and their tremorgenic properties, are presented in the last section of this review. View Full-Text
Keywords: alkaloids; endophytic fungi; Epichloë; lolitrem B; mycotoxins; livestock; toxicology; staggers alkaloids; endophytic fungi; Epichloë; lolitrem B; mycotoxins; livestock; toxicology; staggers
►▼ Show Figures 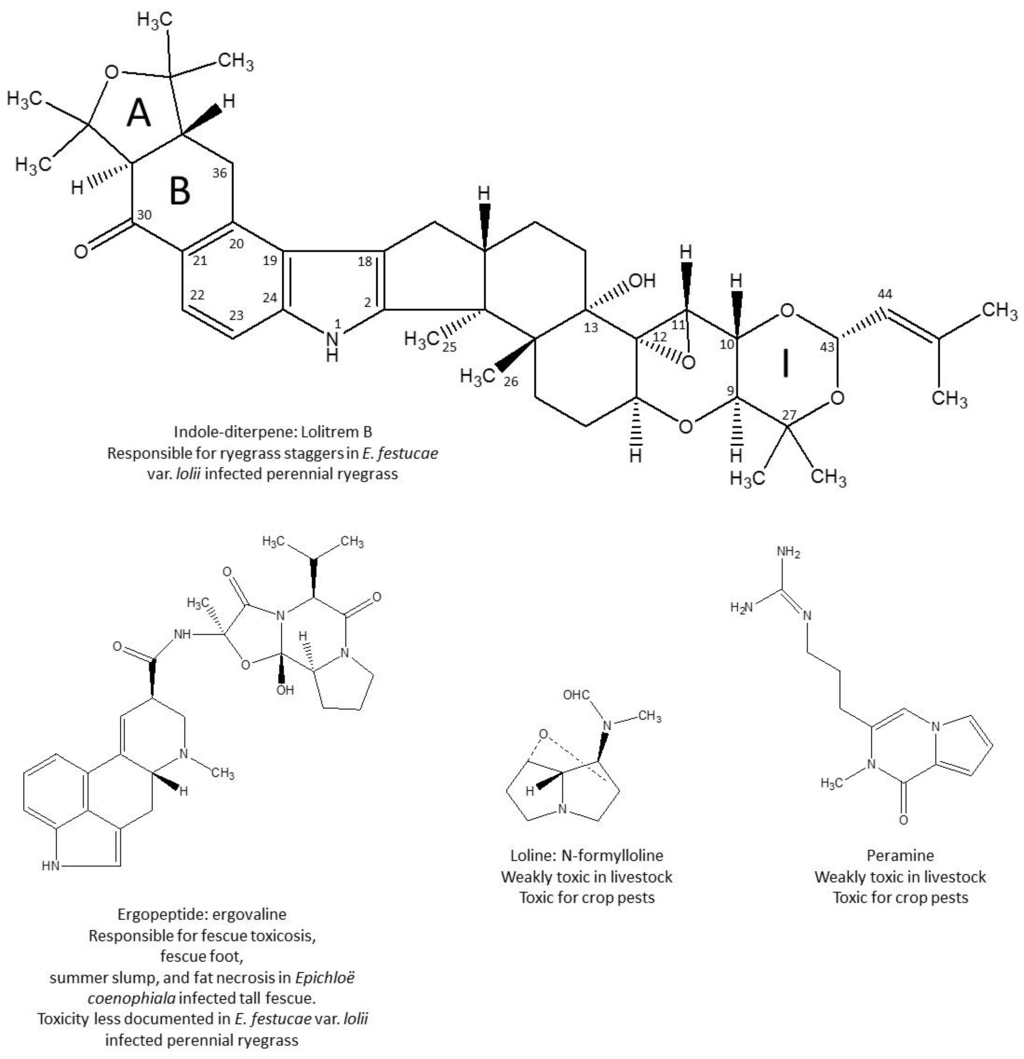 Philippe, G. Lolitrem B and Indole Diterpene Alkaloids Produced by Endophytic Fungi of the Genus Epichloë and Their Toxic Effects in Livestock. Toxins 2016, 8, 47. https://doi.org/10.3390/toxins8020047