Teratogenicity of Ochratoxin A and the Degradation Product, Ochratoxin α, in the Zebrafish (Danio rerio) Embryo Model of Vertebrate Development
Previous Article in Journal

Lung cancer is one of the most common types of cancer in men and women and a leading cause of death worldwide resulting in more than one million deaths per year. The venom of marine snails Conus contains up to 200 pharmacologically active compounds that target several receptors in the cell membrane. Due to their diversity and specific binding properties, Conus toxins hold great potential as source of new drugs against cancer. We analyzed the cytotoxic effect of a 17-amino acid synthetic peptide (s-cal14.1a) that is based on a native toxin (cal14.1a) isolated from the sea snail Conus californicus. Cytotoxicity studies in four lung cancer cell lines were complemented with measurement of gene expression of apoptosis-related proteins Bcl-2, BAX and the pro-survival proteins NFκB-1 and COX-2, as well as quantification of caspase activity. Our results showed that H1299 and H1437 cell lines treated with s-call4.1a had decreased cell viability, activated caspases, and reduced expression of the pro-survival protein NFκB-1. To our knowledge, this is the first report describing activation of apoptosis in human lung cancer cell lines by s-cal14.1a and we offer insight into the possible mechanism of action. View Full-Text
Keywords: lung cancer; synthetic peptide; apoptotic-related genes; caspase-3 and -7; apoptosis; pathway lung cancer; synthetic peptide; apoptotic-related genes; caspase-3 and -7; apoptosis; pathway
►▼ Show Figures 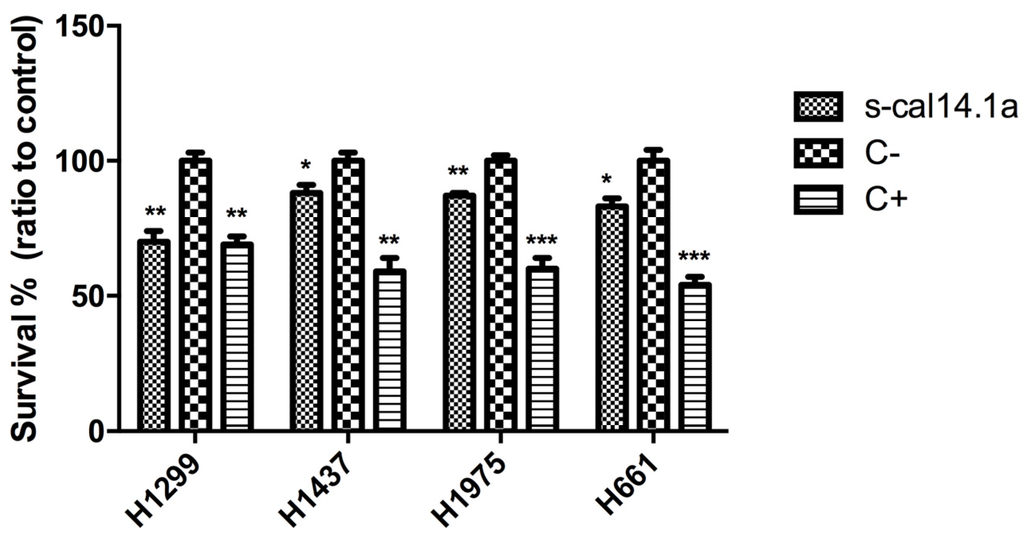