Fusarium graminearum is the predominant causal species of Fusarium head blight in Europe and North America. Different chemotypes of the species exist, each producing a plethora of mycotoxins. Isolates of differing chemotypes produce nivalenol (NIV) and deoxynivalenol (DON), which differ in toxicity to mammals and plants. However, the effect of each mycotoxin on volatile emissions of plant hosts is not known. Host volatiles are interpreted by insect herbivores such as Sitobion avenae, the English grain aphid, during host selection. Previous work has shown that grain aphids are repelled by wheat infected with DON-producing F. graminearum, and this study seeks to determine the influence of pathogen mycotoxins to host volatile chemistry. Volatile collections from infected hosts and olfactometer bioassays with alate aphids were performed. Infections with isolates that produced DON and NIV were compared, as well as a trichothecene deficient transformant derived from the NIV-producing isolate. This work confirmed the repellent nature of infected hosts with DON accumulation. NIV accumulation produced volatiles that were attractive to aphids. Attraction did not occur when NIV was absent and was, therefore, a direct consequence of NIV production. View Full-Text
Keywords: deoxynivalenol; nivalenol; trichothecenes; Fusarium head blight; aphids; volatiles deoxynivalenol; nivalenol; trichothecenes; Fusarium head blight; aphids; volatiles
►▼ Show Figures 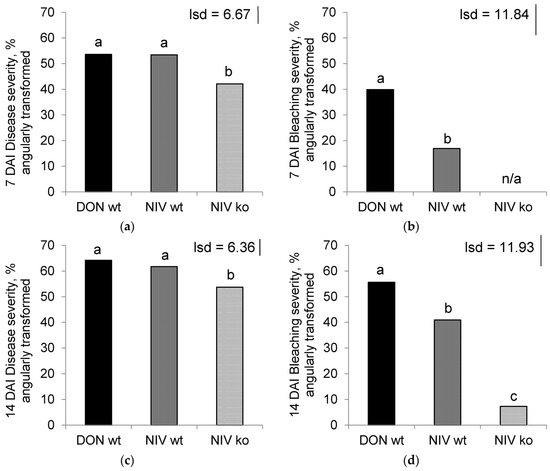