Metabolism of Deoxynivalenol and Deepoxy-Deoxynivalenol in Broiler Chickens, Pullets, Roosters and Turkeys
Previous Article in Journal

Cell-to-Cell Propagation of the Bacterial Toxin CNF1 via Extracellular Vesicles: Potential Impact on the Therapeutic Use of the Toxin
Previous Article in Special Issue

Studies on the Bioavailability of Deoxynivalenol (DON) and DON Sulfonate (DONS) 1, 2, and 3 in Pigs Fed with Sodium Sulfite-Treated DON-Contaminated Maize

Deoxynivalenol (DON) exposure of pigs might cause serious problems when critical dietary toxin concentrations are exceeded. As DON contamination of agricultural crops cannot be completely prevented, detoxification measures are needed. Wet preservation with sodium sulfite resulted in a significant DON reduction of naturally-contaminated maize in previous experiments. The preserved material had a characteristic DON sulfonates (DONS) pattern. DONS is known to be less toxic than DON but its stability was shown to depend on pH, which gives rise to the question if a back-conversion to DON occurs in vivo. Therefore, the toxicokinetics and bioavailability of DON and DONS were studied in pigs. After the administration of a single oral or intravenous bolus of DON or DONS, serial blood samples were collected and subsequently analyzed. DONS was not detectable after oral administration of DONS mixtures. The results showed further that the bioavailability of DONS as DON in pigs fed maize preserved wet with sodium sulfite was significantly decreased compared to untreated control maize (DON), indicating that DONS obviously did not convert back to DON to a large extent in vivo. Moreover, the fact that DONS was not detectable in systemic blood requires further investigations regarding their ingestive and/or metabolic fate. View Full-Text
Keywords: decontamination; sodium sulfite; deoxynivalenol; deoxynivalenol sulfonates; toxicokinetics; bioavailability; pigs decontamination; sodium sulfite; deoxynivalenol; deoxynivalenol sulfonates; toxicokinetics; bioavailability; pigs
►▼ Show Figures 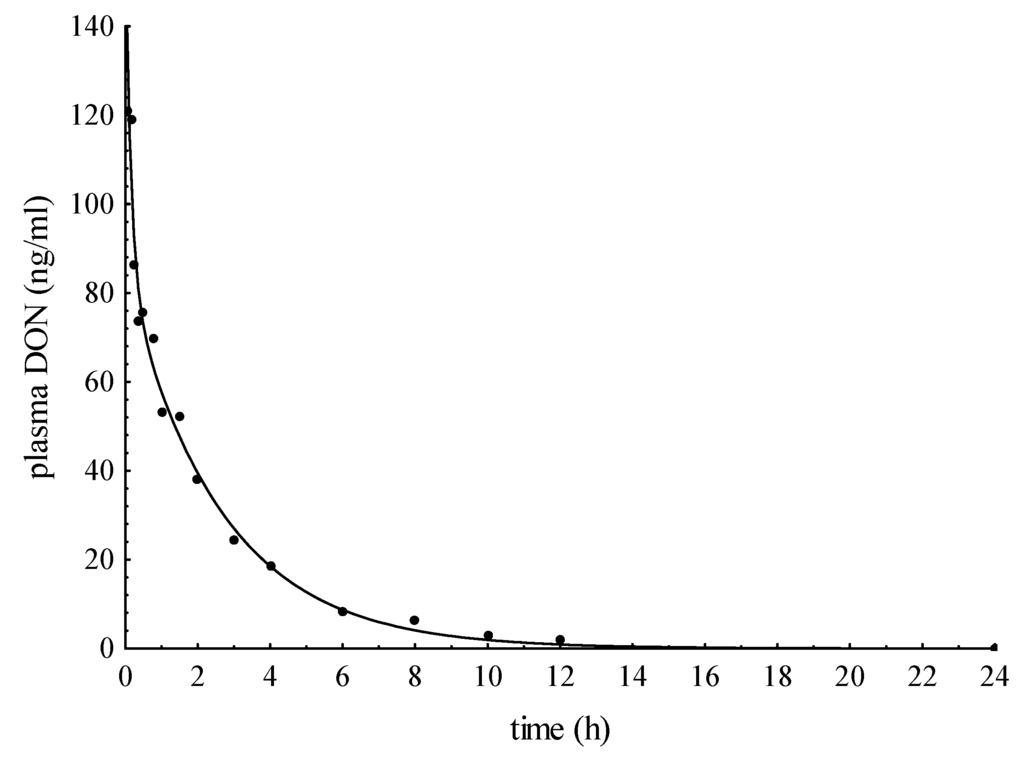