The Effects of Low Doses of Two Fusarium Toxins, Zearalenone and Deoxynivalenol, on the Pig Jejunum. A Light and Electron Microscopic Study
Previous Article in Special Issue

Studies on the Bioavailability of Deoxynivalenol (DON) and DON Sulfonate (DONS) 1, 2, and 3 in Pigs Fed with Sodium Sulfite-Treated DON-Contaminated Maize

Recently, deoxynivalenol-3-sulfate (DON-3-sulfate) was proposed as a major DON metabolite in poultry. In the present work, the first LC-MS/MS based method for determination of DON-3-sulfate, deepoxy-DON-3-sulfate (DOM-3-sulfate), DON, DOM, DON sulfonates 1, 2, 3, and DOM sulfonate 2 in excreta samples of chickens and turkeys was developed and validated. To this end, DOM-3-sulfate was chemically synthesized and characterized by NMR and LC-HR-MS/MS measurements. Application of the method to excreta and chyme samples of four feeding trials with turkeys, chickens, pullets, and roosters confirmed DON-3-sulfate as the major DON metabolite in all poultry species studied. Analogously to DON-3-sulfate, DOM-3-sulfate was formed after oral administration of DOM both in turkeys and in chickens. In addition, pullets and roosters metabolized DON into DOM-3-sulfate. In vitro transcription/translation assays revealed DOM-3-sulfate to be 2000 times less toxic on the ribosome than DON. Biological recoveries of DON and DOM orally administered to broiler chickens, turkeys, and pullets were 74%–106% (chickens), 51%–72% (roosters), and 131%–151% (pullets). In pullets, DON-3-sulfate concentrations increased from jejunum chyme samples to excreta samples by a factor of 60. This result, put into context with earlier studies, indicates fast and efficient absorption of DON between crop and jejunum, conversion to DON-3-sulfate in intestinal mucosa, liver, and possibly kidney, and rapid elimination into excreta via bile and urine. View Full-Text
Keywords: mycotoxins; biomarkers; HPLC-MS/MS; poultry; deoxynivalenol-3-sulfate; deoxynivalenol sulfonates mycotoxins; biomarkers; HPLC-MS/MS; poultry; deoxynivalenol-3-sulfate; deoxynivalenol sulfonates
►▼ Show Figures 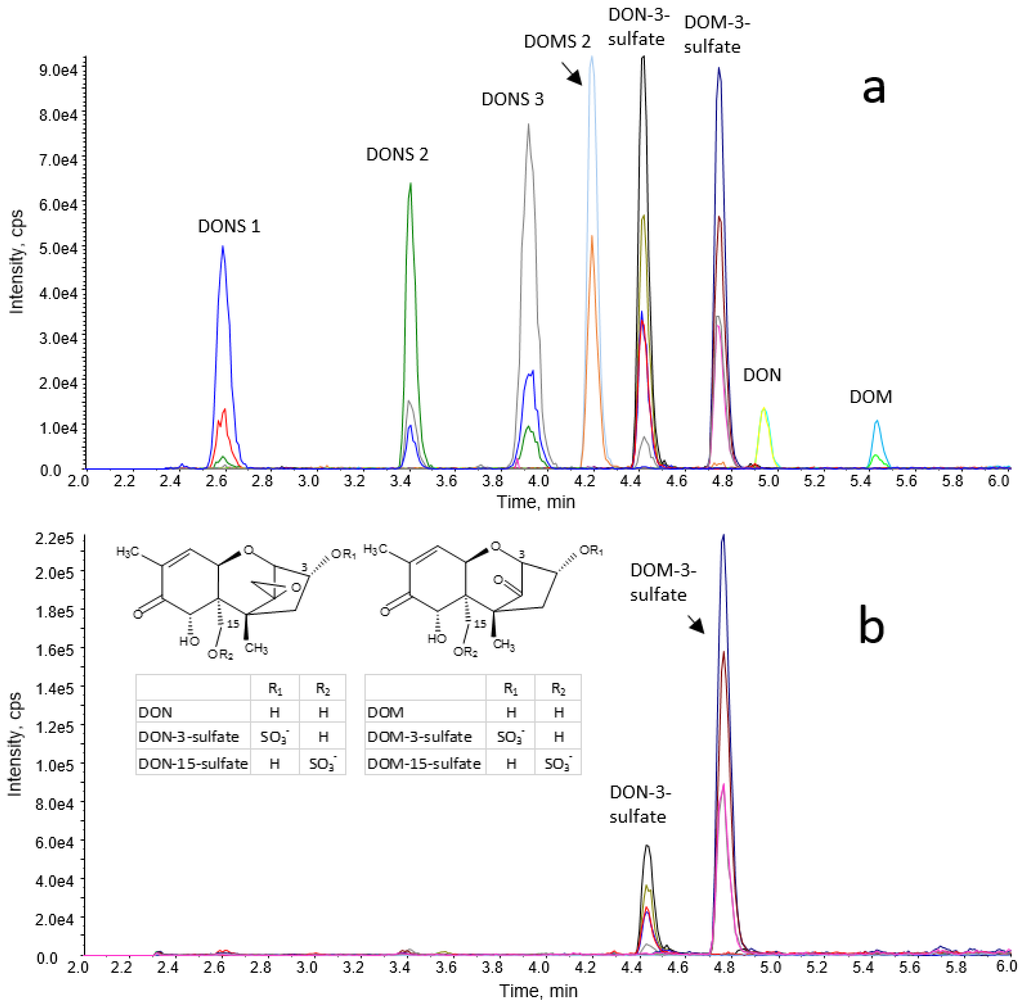