Effects of Light on the Ochratoxigenic Fungi Aspergillus ochraceus and A. carbonarius

Pastures are key feed sources for dairy production and can be contaminated with several secondary metabolites from fungi and plants with toxic or endocrine-disrupting activities, which possess a risk for the health, reproduction and performance of cattle. This exploratory study aimed to determine the co-occurrences and concentrations of a wide range of mycotoxins, phytoestrogens and other secondary metabolites in grazing pastures. Representative samples of pastures were collected from 18 Austrian dairy farms (one sample per farm) between April to October 2019. After sample preparation (drying and milling) the pastures were subjected to multi-metabolite analysis using LC-MS/MS. In total, 68 metabolites were detected, including regulated zearalenone and deoxynivalenol (range: 2.16–138 and 107–505 μg/kg on a dry matter (DM) basis, respectively), modified (3-deoxynivalenol-glucoside, HT-2-glucoside) and emerging Fusarium mycotoxins (e.g., enniatins), ergot alkaloids and Alternaria metabolites along with phytoestrogens and other metabolites. Aflatoxins, fumonisins, T-2 toxin, HT-2 toxin and ochratoxins were not detected. Of the geo-climatic factors and botanical diversity investigated, the environment temperature (average of 2 pre-sampling months and the sampling month) was the most influential factor. The number of fungal metabolites linearly increased with increasing temperatures and temperatures exceeding 15 °C triggered an exponential increment in the concentrations of Fusarium and Alternaria metabolites and ergot alkaloids. In conclusion, even though the levels of regulated mycotoxins detected were below the EU guidance levels, the long-term exposure along with co-occurrence with modified and emerging mycotoxins might be an underestimated risk for grazing and forage-fed livestock. The one-year preliminary data points out a dominant effect of environmental temperature in the diversity and contamination level of fungal metabolites in pastures. View Full-Text
Keywords: pasture; mycotoxin; fungal metabolite; phytoestrogen; cyanogenic glucoside; ergot alkaloid; temperature; dairy cattle pasture; mycotoxin; fungal metabolite; phytoestrogen; cyanogenic glucoside; ergot alkaloid; temperature; dairy cattle
►▼ Show Figures 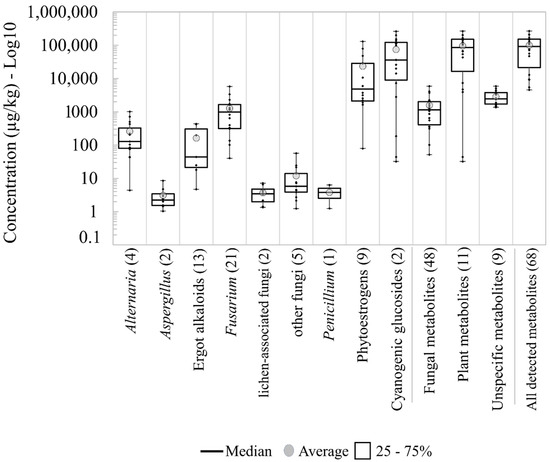