A global strategy, under the coordination of the World Health Organization, is being unfolded to reduce the impact of snakebite envenoming. One of the pillars of this strategy is to ensure safe and effective treatments. The mainstay in the therapy of snakebite envenoming is the administration of animal-derived antivenoms. In addition, new therapeutic options are being explored, including recombinant antibodies and natural and synthetic toxin inhibitors. In this review, snake venom toxins are classified in terms of their abundance and toxicity, and priority actions are being proposed in the search for snake venom metalloproteinase (SVMP), phospholipase A2 (PLA2), three-finger toxin (3FTx), and serine proteinase (SVSP) inhibitors. Natural inhibitors include compounds isolated from plants, animal sera, and mast cells, whereas synthetic inhibitors comprise a wide range of molecules of a variable chemical nature. Some of the most promising inhibitors, especially SVMP and PLA2 inhibitors, have been developed for other diseases and are being repurposed for snakebite envenoming. In addition, the search for drugs aimed at controlling endogenous processes generated in the course of envenoming is being pursued. The present review summarizes some of the most promising developments in this field and discusses issues that need to be considered for the effective translation of this knowledge to improve therapies for tackling snakebite envenoming. View Full-Text
Keywords: snake venom; antivenom; inhibitors; metalloproteinases; phospholipases A2; three finger toxins; peptidomimetic hydroxamates; varespladib snake venom; antivenom; inhibitors; metalloproteinases; phospholipases A2; three finger toxins; peptidomimetic hydroxamates; varespladib
►▼ Show Figures 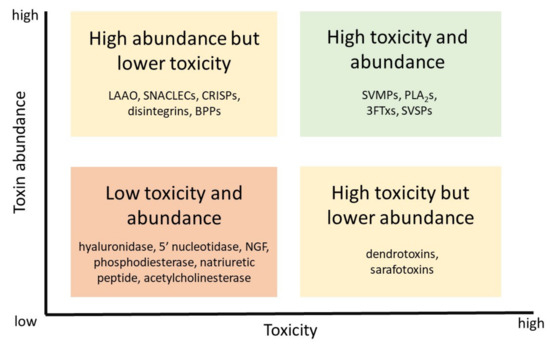