The consumption of pistachios (Pistacia vera L.) has been increasing, given their important benefit to human health. In addition to being an excellent nutritional source, they have been associated with chemical hazards, such as mycotoxins, resulting in fungal contamination and its secondary metabolism. Aflatoxins (AFs) are the most common mycotoxins in pistachio and the most toxic to humans, with hepatotoxic effects. More mycotoxins such as ochratoxin A (OTA), fumonisins (FBs), zearalenone (ZEA) and trichothecenes (T2, HT2 and DON) and emerging mycotoxins have been involved in nuts. Because of the low levels of concentration and the complexity of the matrix, the determination techniques must be very sensitive. The present paper carries out an extensive review of the state of the art of the determination of mycotoxins in pistachios, concerning the trends in analytical methodologies for their determination and the levels detected as a result of its contamination. Screening methods based on immunoassays are useful due to their simplicity and rapid response. Liquid chromatography (LC) is the gold standard with new improvements to enhance accuracy, precision and sensitivity and a lower detection limit. The reduction of Aspergillus’ and aflatoxins’ contamination is important to minimize the public health risks. While prevention, mostly in pre-harvest, is the most effective and preferable measure to avoid mycotoxin contamination, there is an increased number of decontamination processes which will also be addressed in this review. View Full-Text
Keywords: mycotoxins; aflatoxins; pistachios; Pistacia vera L.; determination; analytical methods; occurrence; decontamination mycotoxins; aflatoxins; pistachios; Pistacia vera L.; determination; analytical methods; occurrence; decontamination
►▼ Show Figures 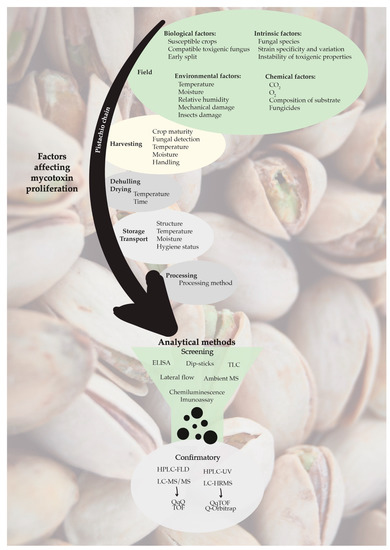