:
In chronic kidney disease (CKD), the secretion of uremic toxins is compromised leading to their accumulation in blood, which contributes to uremic complications, in particular cardiovascular disease. Organic anion transporters (OATs) are involved in the tubular secretion of protein-bound uremic toxins (PBUTs). However, OATs also handle a wide range of drugs, including those used for treatment of cardiovascular complications and their interaction with PBUTs is unknown. The aim of this study was to investigate the interaction between commonly prescribed drugs in CKD and endogenous PBUTs with respect to OAT1-mediated uptake. We exposed a unique conditionally immortalized proximal tubule cell line (ciPTEC) equipped with OAT1 to a panel of selected drugs, including angiotensin-converting enzyme inhibitors (ACEIs: captopril, enalaprilate, lisinopril), angiotensin receptor blockers (ARBs: losartan and valsartan), furosemide and statins (pravastatin and simvastatin), and evaluated the drug-interactions using an OAT1-mediated fluorescein assay. We show that selected ARBs and furosemide significantly reduced fluorescein uptake, with the highest potency for ARBs. This was exaggerated in presence of some PBUTs. Selected ACEIs and statins had either no or a slight effect at supratherapeutic concentrations on OAT1-mediated fluorescein uptake. In conclusion, we demonstrate that PBUTs may compete with co-administrated drugs commonly used in CKD management for renal OAT1 mediated secretion, thus potentially compromising the residual renal function.
Keywords:
protein-bound uremic toxins; chronic kidney disease management; drug-toxin interaction; OAT1-mediated transport
Key Contribution: The excretion of protein-bound uremic toxins might be compromised by the co-administration of drugs commonly used in CKD management.

Chronic kidney disease (CKD) is a worldwide public health problem associated with considerable prevalence of comorbidities, impaired quality of life and premature mortality [1]. In patients with advanced CKD, uremic solutes accumulate due to impaired renal clearance [2]. Many of them are considered uremic toxins (UTs) and are believed to contribute to the uremic syndrome, a generalized organ dysfunction occurring in CKD [3,4,5,6,7,8,9]. In particular, protein-bound uremic toxins (PBUTs) were shown to exert toxic effects or disrupt key signaling and metabolic pathways, including those controlled by a complex network of solute carrier (SLC) and ATP-binding cassette (ABC) transporters and drug-metabolizing enzymes (DMEs), many of which are critical for drug absorption, distribution, metabolism and elimination (ADME) [10,11]. As CKD progresses, drug–metabolite interactions involving transporters can become more deleterious, potentially contributing to new and increased drug toxicities [7,12,13,14,15].
CKD patients are routinely treated with many drugs that require transporters and DMEs for their disposition [11,16]. The daily medication burden in kidney patients is one of the highest reported to date in any chronic disease state [17], and drugs are prescribed mainly at alleviating the metabolic, endocrine and cardiovascular complications in renal insufficiency [18,19,20,21]. Antihypertensive drugs (e.g., renin–angiotensin–aldosterone system inhibitors, such as angiotensin-converting enzyme inhibitors (ACEIs) or angiotensin receptor blockers (ARBs), and diuretics) and cholesterol-lowering drugs (e.g., statins) are frequently prescribed medications for cardiovascular risk management in the CKD population [20,22,23,24,25,26,27,28]. With drug–drug interactions occurring even in patients without renal impairment, such interactions are likely more prevalent in CKD owing to the presence of high levels of uremic solutes that also compete with the administered drugs and with each other for transporters and DMEs [7].
In renal tissue, the key mediators of transepithelial transport of many endogenous metabolites are the organic anion transporters (OATs), which play a central role in the cellular uptake of uremic retention solutes as a first step in their excretion [11,29,30]. Amongst the OATs, OAT1 (SLC22A6) and OAT3 (SLC22A8) are abundantly expressed at the basolateral membrane of proximal tubule cells, and appear to be the most important transporters involved in the renal uptake of endogenous metabolites, including PBUTs (e.g., indoxyl sulfate, p-cresylsulfate, kynurenic acid, etc.), with OAT1 dominating over OAT3 with respect to PBUT uptake [10,29,31,32], drugs (probenecid, methotrexate, adefovir, indomethacin) and other exogeneous toxins [33]. The interactions between PBUTs and commonly prescribed drugs are currently unknown.
The aim of this study was to investigate the pharmacokinetic interactions between commonly prescribed drugs in CKD management (ACEIs, ARBs, statins and furosemide) and PBUTs with respect to OAT1-mediated uptake in an in vitro setting. First, the inhibitory potency of the selected PBUTs and drugs on OAT1 activity was evaluated. For this, we exposed a human conditionally immortalized proximal tubule cells line (ciPTEC) expressing OAT1 (ciPTEC-OAT1) previously developed and characterized [34,35,36,37], to variable concentrations of PBUTs or drugs and evaluated fluorescein uptake, a known substrate for OAT1 [38]. Subsequently, we explored the effect of PBUTs presence, at concentrations similar to those in plasma of CKD patients, on the drug profiles, again, by studying OAT1-mediated fluorescein uptake.

The potency of a panel of several commonly prescribed drugs in the CKD management to inhibit OAT1-mediated fluorescein uptake was investigated in ciPTEC-OAT1 mature monolayers using an inhibition assay, as previously described by Nieskens et al. [36]. CiPTEC-OAT1 cultured in 96-well plates were co-incubated with fluorescein (1 µM, unless otherwise stated) and the selected drugs (Table S3) at different concentrations (nM-mM) prepared in Krebs-Henseleit Buffer supplemented with 10 mM HEPES (KHH buffer, pH 7.4) for 10 min at 37 °C. To confirm the activity of OAT1, probenecid (500 µM in KHH) was simultaneously incubated with fluorescein. Uptake arrest was performed by washing with ice-cold HBSS (Life Technologies Europe BV, Roskilde, Denmark), and then the cells were lysed by 100 µL 0.1 M NaOH for 10 min, at room temperature and under mild shaking. Intracellular fluorescence was detected using the Fluoroskan Ascent FL Spectrophotometer Labsystems (Life Technologies Europe BV, the Netherlands) microplate reader (), at excitation wavelength of 490 nm and emission wavelength of 518 nm. Background values were subtracted and normalized arbitrary fluorescence unit (AFU) data were converted into percentage (%). Incubation with fluorescein alone was assigned as 100% uptake. The reduction in fluorescein uptake in the presence of the inhibitor (drugs) was normalized to fluorescein uptake without the inhibitor.

To confirm the ability of the ciPTEC-OAT1 to handle uremic toxins, cells were co-incubated with fluorescein and PBUTs (indoxyl sulfate, IS 110 µM; kynurenic acid, KA 1 µM; p-cresylsulfate, PCS 125 µM), following the procedure described above. In order to replicate the uremic condition present in CKD patients, a specific mixture of eight known anionic PBUTs (Table S1), predominantly derived from endogenous metabolism pathways and food digestion in the gut, was used at concentrations corresponding to those found in patients. The inhibition of OAT1-mediated fluorescein uptake during the co-exposure to drugs (variable concentrations) and PBUTs (fixed concentration) was determined by the percentage reduction of fluorescein uptake in the cells. Additionally, concentration-dependent mediated fluorescein uptake (concentration range = 0–3 µM) in the presence of PBUTs (IS, KA, pCS and UTox) was studied.

The authors acknowledge the valuable support of Katja Jansen and Anne Metje van Genderen for the interpretation of the concentration-dependent inhibition curves. 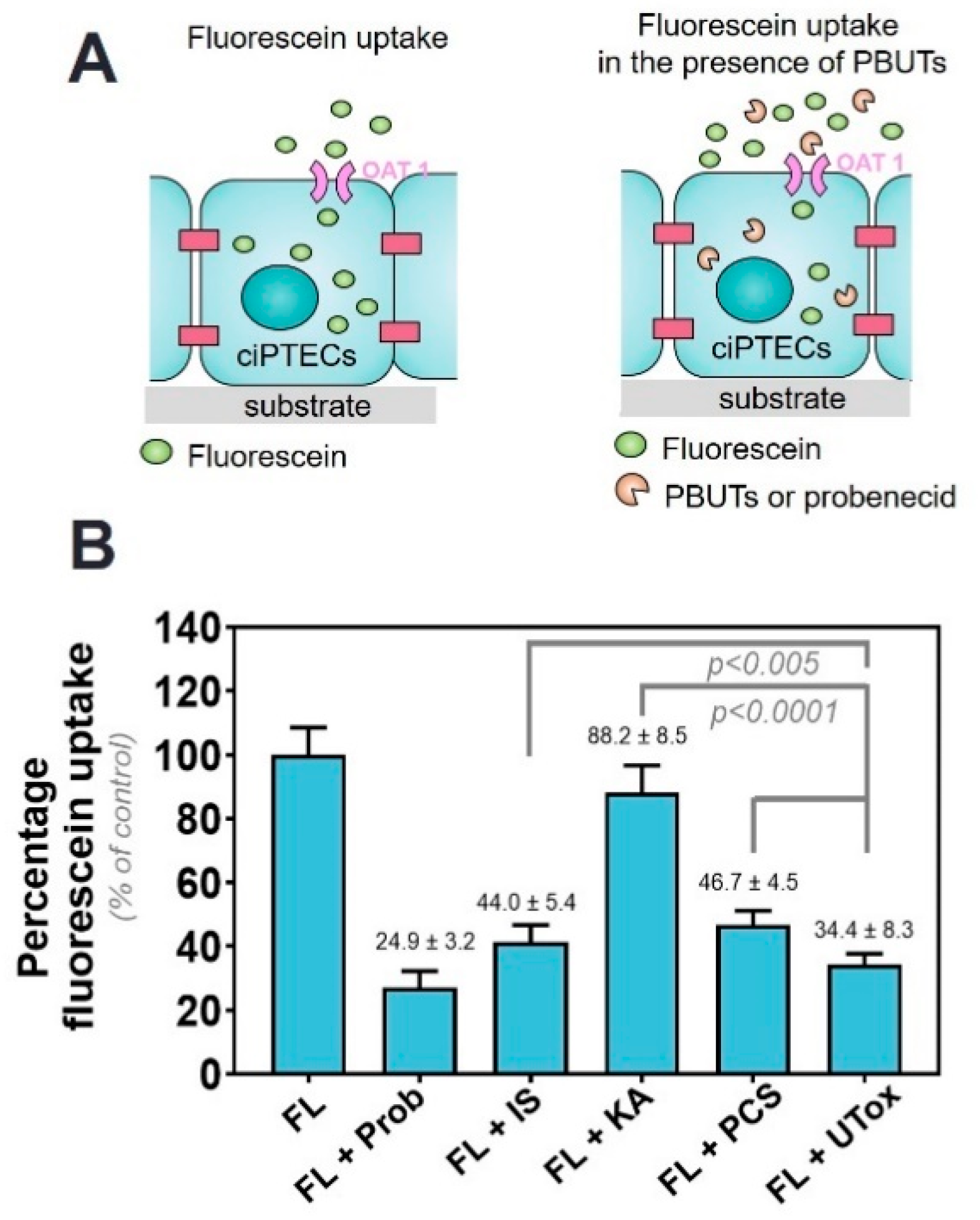 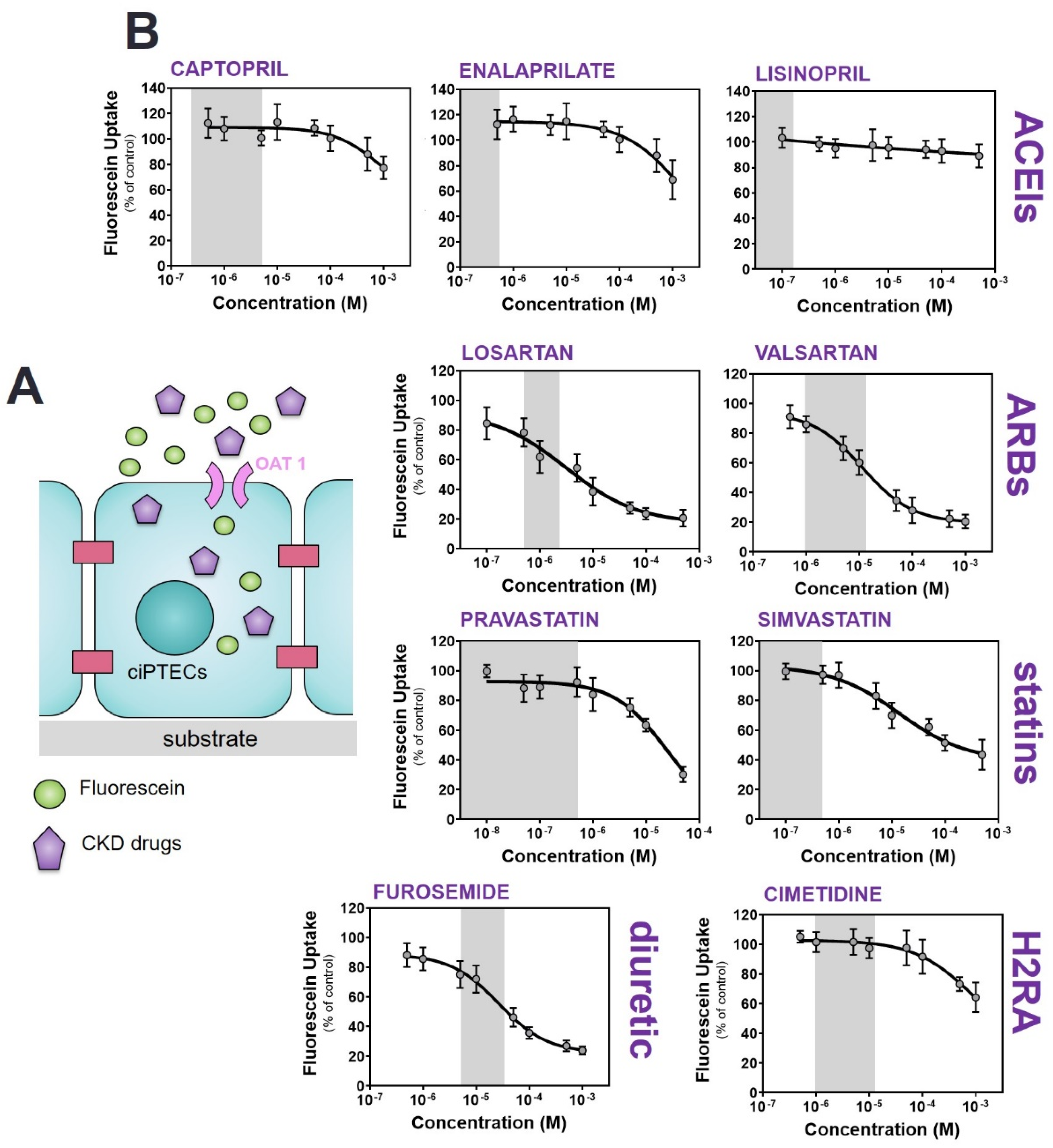 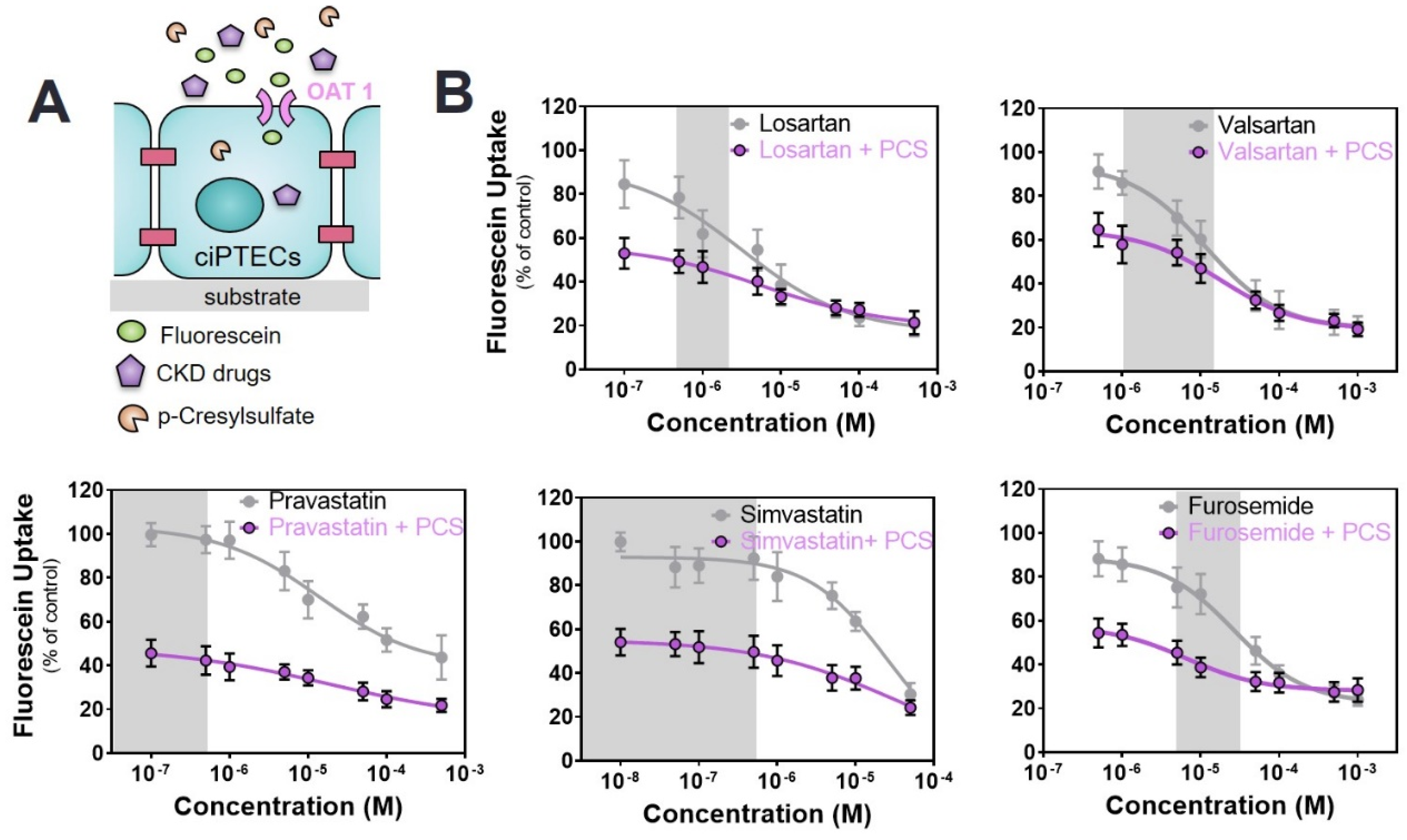