Editorial on the Special Issue “Comorbidities in Chronic Kidney Disease”

An increasing number of studies have found that modified mycotoxins, such as free mycotoxins, naturally occur in food, and severely impact food safety. The present study investigated concentrations of trichothecenes nivalenol (NIV), deoxynivalenol (DON), and zearalenone (ZEN), together with their modified forms, nivalenol-3-glucoside (NIV-3G), deoxynivalenol-3-glucoside (DON-3G), and zearalenone-14-glucoside (ZEN-14G) and zearalenone-14-sulfate (ZEN-14S), respectively, at successive stages of malt loaf production (flour, dough kneading/fermentation, loaf baking). Toxins in bakery products originate in flour produced from wheat grain that is naturally contaminated with Fusarium culmorum. Mycotoxin concentrations were determined using high-performance liquid chromatography-high resolution mass spectrometry, and did not significantly change during the successive stages of bread production. After the dough kneading/fermentation stage, concentrations of NIV-3G and DON-3G were slightly increased, whereas those of ZEN and ZEN-14S were slightly decreased. The largest average decrease (21%) was found in ZEN-14G. After the baking stage, the average concentrations of NIV-3G, DON-3G, ZEN-14S, and ZEN-14G in the loaf crumb and crust decreased by 23%, 28%, 27%, and 20%, respectively, compared with those in the dough. During this technical process, the concentration of ZEN-14G in loaf crumb significantly decreased by an average of 48%, and those of ZEN, ZEN-14S, and ZEN-14G in loaf crust decreased by an average of 29%, 42%, and 48%, respectively. Considering the possibility of modified mycotoxins degradation to free forms, as well as the ability to synthesize them from free forms during technological processes, it would be prudent to consider them together during analysis. View Full-Text
Keywords: baking; malt; bread; Fusarium toxins; trichothecenes; zearalenone; modified mycotoxins baking; malt; bread; Fusarium toxins; trichothecenes; zearalenone; modified mycotoxins
►▼ Show Figures 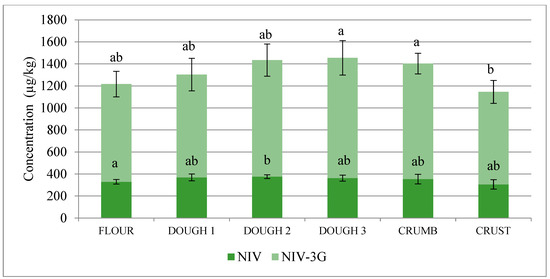