Although envenoming by a small East European species of viper is rarely severe, and only exceptionally fatal, lack of specific antivenom stocks in a few areas within this region and possible severe side effects of antivenom application leave most bites to be treated only with antihistamines and supportive therapy. Varespladib is an effective inhibitor of snake phospholipase, and, as such, it could be considered as first-line therapy. The Nikolsky’s viper venom contains an extremely high concentration of phospholipase A2 (PLA2), responsible for the toxic effects of the venom, as well as minor amounts of other toxins. If Varespladib can successfully inhibit PLA2 activity, the Nikolsky’s viper could be one of the first venomous snakes having an antitoxin-specific treatment regimen. To assess that, Varespladib was administered alone subcutaneously to adult male CD-1 mice (8 mg/kg) and compared to mice exposed to Vipera berus nikolskii crude venom (8 mg/kg = 10 LD50) or a combination of Varespladib and the same amount of the venom. Experimental animals were monitored for the presence of envenoming symptoms and mortality for 48 h after injection. Eighty percent of mice receiving both Varespladib and venom survived, while 100% of the control group receiving venom alone died within 4 h. Experimental results are consistent with Varespladib acting as an effective antitoxin in the mouse model against Nikolsky’s viper venom. Further studies are needed under experimental conditions that more closely resemble natural envenoming (i.e., delayed administration). View Full-Text
Keywords: snakebite; Viperidae; therapy; PLA2; inhibitor; Varespladib; mouse snakebite; Viperidae; therapy; PLA2; inhibitor; Varespladib; mouse
►▼ Show Figures 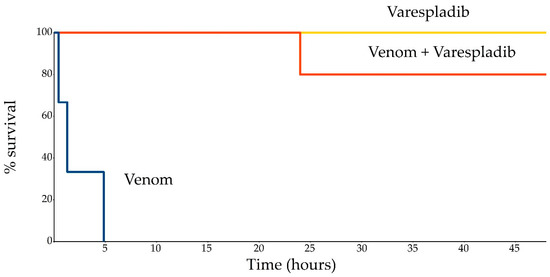