Pinnatoxin G (PnTx-G) is a marine cyclic imine toxin produced by the dinoflagellate Vulcanodinium rugosum, frequently detected in edible shellfish from Ingril Lagoon (France). As other pinnatoxins, to date, no human poisonings ascribed to consumption of PnTx-G contaminated seafood have been reported, despite its potent antagonism at nicotinic acetylcholine receptors and its high and fast-acting toxicity after intraperitoneal or oral administration in mice. The hazard characterization of PnTx-G by oral exposure is limited to a single acute toxicity study recording lethality and clinical signs in non-fasted mice treated by gavage or through voluntary food ingestion, which showed differences in PnTx-G toxic potency. Thus, an acute toxicity study was carried out using 3 h-fasted CD-1 female mice, administered by gavage with PnTx-G (8–450 µg kg−1). At the dose of 220 µg kg−1 and above, the toxin induced a rapid onset of clinical signs (piloerection, prostration, hypothermia, abdominal breathing, paralysis of the hind limbs, and cyanosis), leading to the death of mice within 30 min. Except for moderate mucosal degeneration in the small intestine recorded at doses of 300 µg kg−1, the toxin did not induce significant morphological changes in the other main organs and tissues, or alterations in blood chemistry parameters. This acute oral toxicity study allowed to calculate an oral LD50 for PnTx-G equal to 208 μg kg−1 (95% confidence limits: 155–281 µg kg−1) and to estimate a provisional NOEL of 120 µg kg−1. View Full-Text
Keywords: Vulcanodinium rugosum; pinnatoxin G; dinoflagellates; harmful algae; oral toxicity Vulcanodinium rugosum; pinnatoxin G; dinoflagellates; harmful algae; oral toxicity
►▼ Show Figures 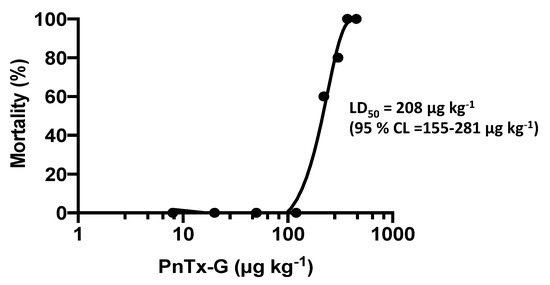