Prevalence, Genotypic and Phenotypic Characterization and Antibiotic Resistance Profile of Clostridium perfringens Type A and D Isolated from Feces of Sheep (Ovis aries) and Goats (Capra hircus) in Punjab, Pakistan

Toxin B (TcdB) produced by Clostridioides difficile is a main pathogenicity factor that affects a variety of different cell types within the colonic mucosa. TcdB is known to utilize frizzled-1,2,7 and chondroitin sulfate proteoglycan-4 (CSPG4) as protein receptors. By using human cervical cancer cell line HeLa CSPG4 knockout (CSPG4−/−) cells as well as TcdB mutants which do not bind to either CSPG4 or frizzled-1,2,7, or both, we evaluated the impact of the individual receptors for cytopathic and cytotoxic effects of TcdB. We compared TcdB from the reference strain VPI10463 (TcdBVPI) and the endemic strain R20291 (TcdBR20) which does not interact with frizzled-1,2,7. TcdBVPI devoid of CSPG4 binding (TcdBVPI ΔCROP) shows identical cytopathic potency as full-length TcdB in HeLa CSPG4−/− cells, indicating that interaction with frizzled proteins is not affected in the presence of the C-terminal CROP domain. We validated CSPG4 as cellular receptor for both TcdB toxinotypes in HeLa and HEp-2 cells. By exchange of a single phenylalanine residue, 1597 with serine, we generated a mutated TcdBVPI variant (TcdBVPI F1597S) that in accordance with TcdBR20 lacks binding to frizzled-1,2,7 and showed identical potency as TcdBR20 on HeLa cells. This enabled us to estimate the respective share of CSPG4 and frizzled-1,2,7 in the cytotoxic and cytopathic effect induced by TcdB. Our data reveal that binding to frizzled-1,2,7 and to CSPG4 occurs independently and in an additive manner. View Full-Text
Keywords: Clostridioides difficile; glucosyltransferase; receptor binding Clostridioides difficile; glucosyltransferase; receptor binding
►▼ Show Figures 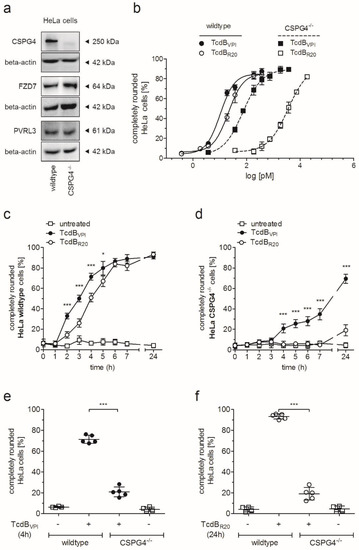