Absorption and accumulation of bioavailable cyanobacterial metabolites (including cyanotoxins) are likely in fish after senescence and the rupturing of cells during bloom episodes. We determined the toxicity of cyanopeptides identified from two strains of Microcystis (M. panniformis MIRS-04 and M. aeruginosa NPDC-01) in a freshwater tropical fish, Astyanax altiparanae (yellowtail tetra, lambari). Aqueous extracts of both Microcystis strains were prepared in order to simulate realistic fish exposure to these substances in a freshwater environment. Both strains were selected because previous assays evidenced the presence of microcystins (MCs) in MIRS-04 and lack of cyanotoxins in NPDC-01. Identification of cyanobacterial secondary metabolites was performed by LC-HR-QTOF-MS and quantification of the MC-LR was carried out by LC-QqQ-MS/MS. MIRS-04 produces the MCs MC-LR, MC-LY and MC-HilR as well as micropeptins B, 973, 959 and k139. NPCD-01 biosynthetizes microginins FR1, FR2/FR4 and SD-755, but does not produce MCs. Larval fish survival and changes in morphology were assessed for 96 h exposure to aqueous extracts of both strains at environmentally relevant concentrations from 0.1 to 0.5 mg (dry weight)/mL, corresponding to 0.15 to 0.74 μg/mL of MC-LR (considering dried amounts of MIRS-04 for comparison). Fish mortality increased with concentration and time of exposure for both strains of Microcystis. The frequencies of morphological abnormalities increased with concentration in both strains, and included abdominal and pericardial oedema, and spinal curvature. Results demonstrate that toxicity was not solely caused by MCs, other classes of cyanobacterial secondary metabolites contributed to the observed toxicity. View Full-Text
Keywords: cyanobacterial peptides; mass spectrometry; microcystins; Astyanax; morphological alteration; GNPS cyanobacterial peptides; mass spectrometry; microcystins; Astyanax; morphological alteration; GNPS
►▼ Show Figures 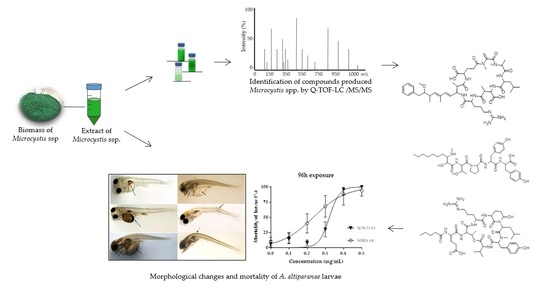