Co-Occurrence of Beauvericin and Enniatins in Edible Vegetable Oil Samples, China
Next Article in Special Issue

Distribution of Toxigenic Halomicronema spp. in Adjacent Environments on the Island of Ischia: Comparison of Strains from Thermal Waters and Free Living in Posidonia Oceanica Meadows

Organisms adaptable to extreme conditions share the ability to establish protective biofilms or secrete defence toxins. The extracellular substances that are secreted may contain monosaccharides and other toxic compounds, but environmental conditions influence biofilm characteristics. Microorganisms that are present in the same environment achieve similar compositions, regardless of their phylogenetic relationships. Alternatively, cyanobacteria phylogenetically related may live in different environments, but we ignore if their physiological answers may be similar. To test this hypothesis, two strains of cyanobacteria that were both ascribed to the genus Halomicronema were isolated. H. metazoicum was isolated in marine waters off the island of Ischia (Bay of Naples, Italy), free living on leaves of Posidonia oceanica. Halomicronema sp. was isolated in adjacent thermal waters. Thus, two congeneric species adapted to different environments but diffused in the same area were polyphasically characterized by microscopy, molecular, and toxicity analyses. A variable pattern of toxicity was exhibited, in accordance with the constraints imposed by the host environments. Cyanobacteria adapted to extreme environments of thermal waters face a few competitors and exhibit a low toxicity; in contrast, congeneric strains that have adapted to stable and complex environments as seagrass meadows compete with several organisms for space and resources, and they produce toxic compounds that are constitutively secreted in the surrounding waters. View Full-Text
Keywords: toxicology; thermal water; marine; adaptation; evolution; spent medium toxicology; thermal water; marine; adaptation; evolution; spent medium
►▼ Show Figures 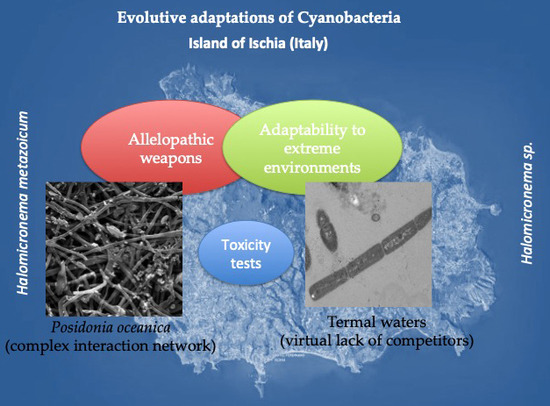