Resveratrol, a natural polyterpenoid, can scavenge reactive oxygen species in vivo to carry out the functions of antioxidation and antiaging. Resveratrol’s anti-cancer capability has attracted widespread attention, but its molecular mechanism has not been systematically explained. In this study, by comparing the activity of normal cell lines and cancer cell lines after treating with resveratrol, it was found that resveratrol has more significant cytotoxicity in cancer cell lines. Resveratrol could play a toxic role through inducing apoptosis of the cancer cell in a time- and concentration-dependent manner. A total of 330 significantly differential genes were identified through large-scale transcriptome sequencing, among which 103 genes were upregulated and 227 genes were downregulated. Transcriptome and qRT-PCR data proved that a large number of genes related to cell cycle were differentially expressed after the treatment of resveratrol. The changes of cell cycle phases at different time points after treating with resveratrol were further detected, and it was found that the cells were arrested in the S phase because of the percentage of cells in S phase increased and cells in G1/G0 phase decreased. In conclusion, resveratrol can inhibit the proliferation of 4T1 cancer cells by inhibiting cell cycle and inducing apoptosis. View Full-Text
Keywords: resveratrol; cytotoxicity; RNA-seq; cell cycle; apoptosis resveratrol; cytotoxicity; RNA-seq; cell cycle; apoptosis
►▼ Show Figures 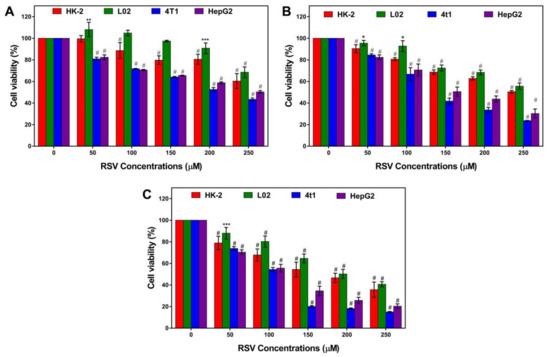