Various signaling pathways in filamentous fungi help cells receive and respond to environmental information. Previous studies have shown that the mitogen-activated protein kinase (MAPK) pathway is phosphorylation-dependent and activated by different kinase proteins. Serine/threonine kinase plays a very important role in the MAPK pathway. In this study, we selected the serine/threonine kinase AflSte20 in Aspergillus flavus for functional study. By constructing Aflste20 knockout mutants and complemented strains, it was proven that the Aflste20 knockout mutant (ΔAflste20) showed a significant decrease in growth, sporogenesis, sclerotinogenesis, virulence, and infection compared to the WT (wild type) and complemented strain (ΔAflste20C). Further research indicated that ΔAflste20 has more sensitivity characteristics than WT and ΔAflste20C under various stimuli such as osmotic stress and other types of environmental stresses. Above all, our study showed that the mitogen-activated kinase AflSte20 plays an important role in the growth, conidia production, stress response and sclerotia formation, as well as aflatoxin biosynthesis, in A. flavus. View Full-Text
Keywords: aflatoxin; Aspergillus flavus; HOG pathway; Aflste20 aflatoxin; Aspergillus flavus; HOG pathway; Aflste20
►▼ Show Figures 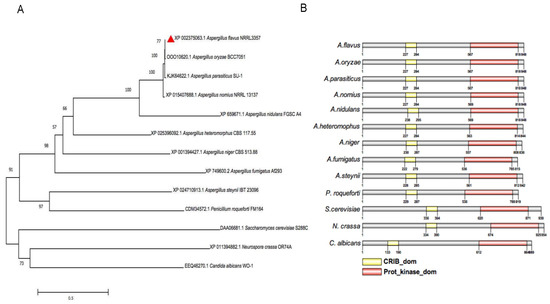