Hepatotoxic microcystins (MCs) are the most widespread class of cyanotoxins and the one that has most often been implicated in cyanobacterial toxicosis. One of the main challenges in studying and monitoring MCs is the great structural diversity within the class. The full chemical structure of the first MC was elucidated in the early 1980s and since then, the number of reported structural analogues has grown steadily and continues to do so, thanks largely to advances in analytical methodology. The structures of some of these analogues have been definitively elucidated after chemical isolation using a combination of techniques including nuclear magnetic resonance, amino acid analysis, and tandem mass spectrometry (MS/MS). Others have only been tentatively identified using liquid chromatography-MS/MS without chemical isolation. An understanding of the structural diversity of MCs, the genetic and environmental controls for this diversity and the impact of structure on toxicity are all essential to the ongoing study of MCs across several scientific disciplines. However, because of the diversity of MCs and the range of approaches that have been taken for characterizing them, comprehensive information on the state of knowledge in each of these areas can be challenging to gather. We have conducted an in-depth review of the literature surrounding the identification and toxicity of known MCs and present here a concise review of these topics. At present, at least 279 MCs have been reported and are tabulated here. Among these, about 20% (55 of 279) appear to be the result of chemical or biochemical transformations of MCs that can occur in the environment or during sample handling and extraction of cyanobacteria, including oxidation products, methyl esters, or post-biosynthetic metabolites. The toxicity of many MCs has also been studied using a range of different approaches and a great deal of variability can be observed between reported toxicities, even for the same congener. This review will help clarify the current state of knowledge on the structural diversity of MCs as a class and the impacts of structure on toxicity, as well as to identify gaps in knowledge that should be addressed in future research. View Full-Text
Keywords: microcystin; cyanobacteria; cyanotoxin; structural elucidation; toxicology microcystin; cyanobacteria; cyanotoxin; structural elucidation; toxicology
►▼ Show Figures 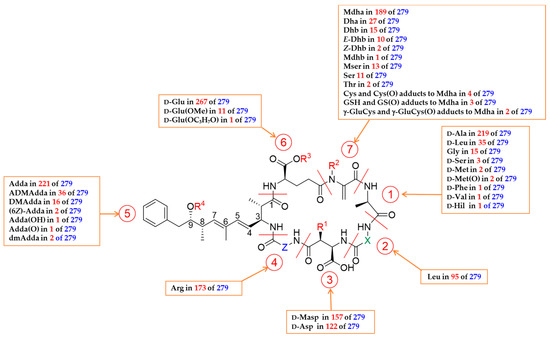