:
The binding of compounds to nicotinic acetylcholine receptors is of great interest in biomedical research. However, progress in this area is hampered by the lack of a high-throughput, cost-effective, and taxonomically flexible platform. Current methods are low-throughput, consume large quantities of sample, or are taxonomically limited in which targets can be tested. We describe a novel assay which utilizes a label-free bio-layer interferometry technology, in combination with adapted mimotope peptides, in order to measure ligand binding to the orthosteric site of nicotinic acetylcholine receptor alpha-subunits of diverse organisms. We validated the method by testing the evolutionary patterns of a generalist feeding species (Acanthophis antarcticus), a fish specialist species (Aipysurus laevis), and a snake specialist species (Ophiophagus hannah) for comparative binding to the orthosteric site of fish, amphibian, lizard, snake, bird, marsupial, and rodent alpha-1 nicotinic acetylcholine receptors. Binding patterns corresponded with diet, with the Acanthophis antarcticus not showing bias towards any particular lineage, while Aipysurus laevis showed selectivity for fish, and Ophiophagus hannah a selectivity for snake. To validate the biodiscovery potential of this method, we screened Acanthophis antarcticus and Tropidolaemus wagleri venom for binding to human alpha-1, alpha-2, alpha-3, alpha-4, alpha-5, alpha-6, alpha-7, alpha-9, and alpha-10. While A. antarcticus was broadly potent, T. wagleri showed very strong but selective binding, specifically to the alpha-1 target which would be evolutionarily selected for, as well as the alpha-5 target which is of major interest for drug design and development. Thus, we have shown that our novel method is broadly applicable for studies including evolutionary patterns of venom diversification, predicting potential neurotoxic effects in human envenomed patients, and searches for novel ligands of interest for laboratory tools and in drug design and development.
Keywords:
venom; ligand; evolution; biosensor; nicotinic acetylcholine receptor
Key Contribution: This paper presents a novel method that allows for the first time high-throughput, flexible testing of ligand binding to taxon-specific nicotinic acetylcholine receptors.

Venoms were sourced from individual adult snakes (captive and wild-caught) from either the long-term cryogenic collection of the Venom Evolution Laboratory or donated by Venom Supplies Pty Ltd. All venoms were lyophilized and reconstituted in deionized water, centrifuged (4 °C, 5 min at 14,000 RCF), and the supernatant made into a ‘working stock’ (1 mg/mL) with 50% glycerol to prevent freezing at −20 °C where they were stored until use. Protein concentrations were determined in triplicate using a NanoDrop 2000 UV-Vis Spectrophotometer (Thermofisher, Sydney, NSW, Australia) at an absorbance of 280 nm.

The amino acid sequences for the α-1 orthosteric site for each species were obtained from public databases with the following accession codes: fish α-1 (uniprot P02710), amphibian α-1 (uniprot F6RLA9), lizard α-1 (genbank XM_015426640), avian α-1 (uniprot E1BT92), marsupial α-1 (uniprot G3W0J0), rodent α-1 (uniprot P25108), human α-1 (uniprot G5E9G9), human α-2 (uniprot Q15822), human α-3 (uniprot P32297), human α-4 (uniprot P43681), human α-5 (uniprot P30532), human α-6 (uniprot Q15825), human α-7 (uniprot P36544), human α-9 (uniprot Q9UGM1), and human α-10 (uniprot Q9GZZ6). The only exception was the α-1 sequence for the snake Coelognathus radiatus, which was Sanger sequenced by us using the primers (with the M13 primer extension shown in italics): Forward primer sequence – TGTAAAACGACGGCCAGTGGAAGCATTTTCCTTTTCAGGAA; Reverse primer sequence-CAGGAAACAGCTATGACGAATGAGAAGAGAAGGCAAGGAAT.
Subsequently, following previous protocols [14,15,16,21] a 13–14 amino acid mimotopes of the acetylcholine orthosteric site of vertebrate α-1 to α-10 nAChRs subunits were synthesized by GenicBio Ltd. (Shanghai, China) based on requested specifications which were adapted from publicly available GenBank sequences and unpublished sequences of cholinergic receptors. As per previous studies [14], the Cys-Cys bridge of the native form was replaced with Ser-Ser for the mimotopes during peptide synthesis steps to avoid uncontrolled postsynthetic thiol oxidation. Research has shown this has no effect on the analyte-ligand complex formation [29,30,31]. The mimotope peptide was then joined to two aminohaxanoic acid (Ahx) spacers to form a 30 Å linker, with the end Ahx then bound to biotin, thereby providing crucial clearance between the biotin and mimotope so that the mimotope maintains its natural conformational freedom when binding to the analyte in solution.
Dried stocks of synthesized mimotopes were solubilized in 100% dimethyl sulfoxide (DMSO) and then diluted 1:10 in deionized water to make a final working stock concentration of 50 µg/mL and stored at −80 °C until use.

Binding kinetics were analyzed by BLI utilizing the Octet Red 96 system (ForteBio). All assays were conducted in standard Greiner black 96 microtiter well plates. Analyte (venom) samples were diluted 1:20 from the working stock to make a final experimental concentration of 50 µg/mL in the well (10 µg per well). Mimotope aliquots were diluted 1:50 to have a final concentration of 1 µg/mL in the well (0.2 µg per well). Assay running buffer was 1X DPBS with 0.1% BSA and 0.05% Tween-20. This buffer inhibits non-specific binding to the surface of the sensor and other proteins. Prior to experimentation, streptavidin sensors were hydrated in the running buffer for 30–60 min, whilst being agitated at 2.0 RPM on a shaker. To regenerate the sensor tips during experimentation, the dissociation of analytes occurs using a standard acidic solution (glycine buffer), made up of 10mM glycine (pH 1.5–1.7) in deionized water.
Octet RED 96 assay methodology in the ForteBio Data Acquisition 9.0 program was set as follows: 60 s baseline, 50 s loading, 120 s baseline, 120 s association, 120 s dissociation, and 80 s regeneration/neutralization step. The regeneration/neutralization step consists of four cycles, lasting 10 s each, alternating between dipping in glycine buffer (regeneration) and then in running buffer (neutralization) per cycle. For each baseline step throughout the experiment the same running buffer was used a maximum of three times per well. Experiments were run at 30 °C with the orbital agitation of the microplate set to 1000 rpm. Experiments were limited to less than 1 h to limit the change in analyte concentration due to evaporation on the warmed plate [32].
Analytes were set up in rows A-H, with triplicates set up in columns 1–3 and 4–6. To account for any potential evaporation effect in the wells during experimentation, the column running order was set to 1, 4, 2, 5, 3, 6 (rather than 1, 2, 3, 4, 5, 6). The mimotopes were set in column 7, running buffer was set in columns 8–10, and regeneration step (glycine buffer) and neutralization step (running buffer) were columns 11 and 12 respectively.
Negative controls consisted of deionized water:glycerol 1:1 mix in replacement of the sample in the wells. Bungarus multicinctus venom was used as a positive control, as it has been shown to bind nAChR mimotopes [14,15,16].

Data were processed as follows: 1) raw output folders (one per plate run) containing multiple running files were opened in the ForteBio Data Analysis 9.0 program, and in this program: 2) the ‘sensor tray’ was aligned with the location of sensors on our experimental plate, 3) an inter-step correction was performed whereby the data was aligned to baseline according to the Y-axis of the initial baseline step (0.1–59.9 s), 4) a Savitsky-Golay filter was applied to the data (to remove high-frequency noise from the data), 5) the data were processed according to the above parameters, and 6) exported to Microsoft Excel as a .csv file. The association step data from this .csv file was extracted for each triplicate and imported into Prism 7.0 software (GraphPad Software Inc., La Jolla, CA, USA) where Area Under the Curve (AUC) analyses were conducted and graphs produced.
The phylogenetic trees used were obtained by entering the taxa into timetree.org. These trees were manually recreated using Mesquite software (version 3.2) and then imported to Rstudio (R Core Team, 2015) for all comparative analyses using the APE package for basic data manipulation [33]. In order to investigate the evolutionary relationships of traits, ancestral state reconstructions (ASR) were estimated over the tree using maximum likelihood in the contMap function of the R package phytools [34].

This work was supported by Australian Research Council Discovery Project DP190100304. We would like to thank Hendrick Loei from Fortebio for his help in protocol development. 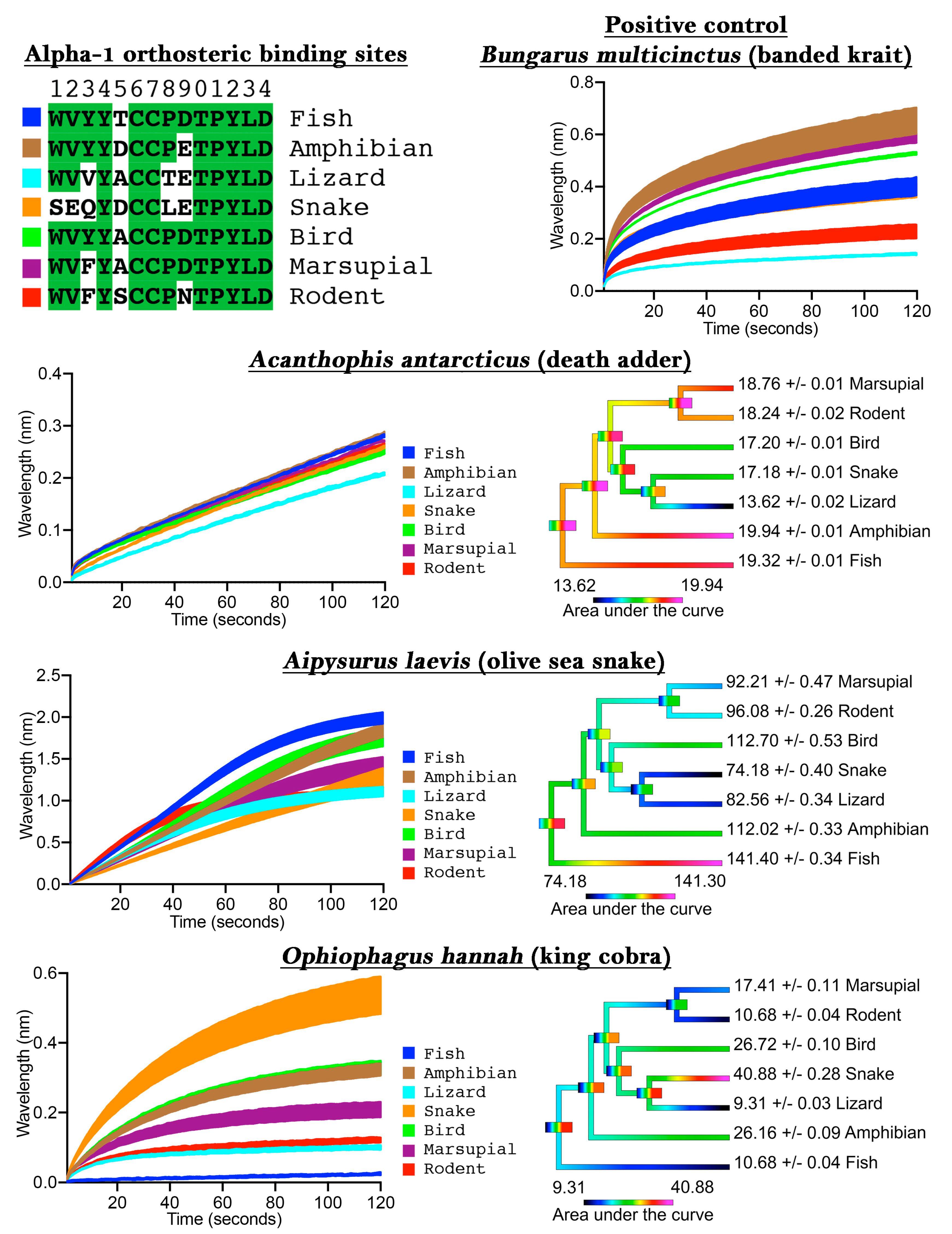