Consuming excessive amounts of energy as dietary fat for several days or weeks can impair glycemic control and reduce insulin sensitivity in healthy adults. However, individuals who demonstrate binge eating behavior overconsume for much shorter periods of time; the metabolic consequences of such behavior remain unknown. The aim of this study was to determine the effect of a single day of high-fat overfeeding on whole-body insulin sensitivity. Fifteen young, healthy adults underwent an oral glucose tolerance test before and after consuming a high-fat (68% of total energy), high-energy (78% greater than daily requirements) diet for one day. Fasting and postprandial plasma concentrations of glucose, insulin, non-esterified fatty acids, and triglyceride were measured and the Matsuda insulin sensitivity index was calculated. One day of high-fat overfeeding increased postprandial glucose area under the curve (AUC) by 17.1% (p < 0.0001) and insulin AUC by 16.4% (p = 0.007). Whole-body insulin sensitivity decreased by 28% (p = 0.001). In conclusion, a single day of high-fat, overfeeding impaired whole-body insulin sensitivity in young, healthy adults. This highlights the rapidity with which excessive consumption of calories through high-fat food can impair glucose metabolism, and suggests that acute binge eating may have immediate metabolic health consequences for the individual.
Keywords: glucose; insulin; high-fat; overfeeding; glycemic control; type 2 diabetes mellitus glucose; insulin; high-fat; overfeeding; glycemic control; type 2 diabetes mellitus

Binge eating, which is defined as discreet periods of excessive food consumption that is not driven by hunger or metabolic need [1,2], is strongly associated with overweight and obesity [3,4,5], which are risk factors for developing insulin resistance and the metabolic syndrome [6]. Those who exhibit binge eating behavior are known to eat until they are uncomfortably full and then may or may not compensate for this increased energy intake, with the latter leading to a positive energy balance [1]. The etiology of binge eating and binge eating disorders (BED: the clinical manifestation of binge eating behavior [7]) has been extensively studied from a psychological perspective, with findings indicating that a number of stressors (e.g., interpersonal, ego-threatening, and work-related) are associated with increased food intake and inter-meal snacking [8,9]. However, the metabolic response to such behavior has received relatively little attention and, therefore, little is known regarding the metabolic consequences.
Binge eating has been associated with a selective increase in the intake of palatable foods (i.e., foods which are high in fat and/or sugar) [7]. This is important, as dietary composition appears to be a key mediating feature in the pathogenesis of metabolic disease. For example, high-fat diets or the consumption of saturated fatty acid (SFA)-enriched diets have been associated with insulin resistance [10,11]. Results from the Kuopio, Aarhus, Naples, Wollongong and Uppsala (KANWU) study demonstrated that consumption of an SFA-rich diet for three months reduced insulin sensitivity in healthy adults when compared to a diet enriched in monounsaturated fatty acids (MUFA) [12]. Furthermore, when stratified by habitual total fat intake (above and below median), individuals with a higher fat intake (>37% total energy (TE)) exhibited reduced insulin sensitivity compared to those with a low intake (<37% TE) [13]. The mechanism by which a high total fat or SFA-diet causes insulin resistance remains unclear. One hypothesis is that adipose tissue dysfunction leads to an overabundance of circulating non-esterified fatty acid (NEFA) and insulin resistance ensues due to the accumulation of NEFA in non-adipose tissue organs, such as skeletal muscle and the liver [14]. Although work from the 1960s [15,16] supports the hypothesis as elevated NEFA concentrations were observed in obesity; recent reports are not in agreement [17]. Experimentally elevating plasma NEFA concentrations, via intravenous (iv) infusion of a lipid-heparin emulsion (Intralipid), rapidly (within 6–8 h) reduces insulin-mediated glucose disposal in healthy, lean individuals [18,19,20]. This is associated with a sequential pattern of events starting with an increase in circulating triglyceride (TG) levels (<0.5 h), followed by a supraphysiological increase in circulating NEFA levels (~1–1.5 h), a rise in intramyocellular lipid (IMCL) content (~2.5 h), and finally a reduction in insulin sensitivity; this supports the concept that elevated NEFA levels are a key player in the development of insulin resistance. However, during iv lipid infusions, plasma NEFA concentrations are typically elevated to around 1500 μmol/L or higher [17], which is in excess of the fasting concentrations reported for obese, insulin-resistant individuals (~400 µmol/L) [21], and individuals with poorly managed type 2 diabetes mellitus (T2DM) (~800 µmol/L) [22].
Results from short-term (4–14 days), high-fat overfeeding interventions report impaired glycemic control [23,24,25] and decreased hepatic [26] and whole-body insulin sensitivity [27,28] despite unchanged or reduced plasma NEFA concentrations. Although these studies demonstrate that impairments in glycemic control occur after several days or weeks of consistent overconsumption, this model may not reflect the dietary practices of those who binge eat and consume a severe energy excess within a matter of hours. Although it remains unclear if episodes of binge eating have a negative impact on glucose metabolism, there is some evidence, albeit limited, to suggest that diet-induced impairments may occur very rapidly. Nowotny et al. [29] reported that oral administration of a single dose of soybean oil (100 mL), which is enriched with polyunsaturated fat (61% polyunsaturated, 23% monounsaturated, and 16% saturated), reduced whole-body insulin sensitivity (assessed by hyperinsulinemic-euglycemic clamp) to a comparable extent and within a similar time-frame (6 h post ingestion/infusion) as an energy and composition-matched iv lipid-heparin infusion. This occurred independent of plasma NEFA levels, which were elevated during the iv fat infusion but were unchanged following oral fat ingestion [29]. Insulin sensitivity was assessed 6–8 h after fat ingestion/infusion [29], and it is possible that the observed reduction in insulin sensitivity was a transient response related to the ongoing metabolism of fat; it would be of interest to determine if changes persist into the post-absorptive state and occur after the consumption of a diet more reflective of Western style eating patterns (i.e., SFA rather than polyunsaturated fatty acid (PUFA)-enriched). Therefore, in order to replicate excessive binge eating behavior, we undertook a pilot study in which whole-body insulin sensitivity was assessed in young, healthy, non-obese individuals after a single day of high-energy, high-fat, SFA-rich food intake.

Fifteen healthy individuals were recruited for this study. All subjects were physically active (exercising at least three times per week for more than 30 min at a time), non-smokers, free from cardiovascular and metabolic disease, not taking any medication, and weight stable for at least six months. The study was conducted according to the Declaration of Helsinki and was approved by the Loughborough University Ethical subcommittee for human participants (ethical approval number R13-P171). All subjects gave written informed consent.

Prior to the start of the study, subjects attended the laboratory for an initial assessment of baseline anthropometric characteristics (height, weight, and body mass index (BMI)) which were used to estimate resting energy expenditure (REE) using the calculations described by Mifflin et al. [30]. A standard correction for physical activity level (1.6 and 1.7 times REE for females and males, respectively) was applied in order to estimate total daily energy requirements. This information was then used to determine individual energy intakes for the one-day overfeeding period.

After the pre-testing visit, subjects attended the laboratory for an oral glucose tolerance test (OGTT) and then continued their habitual food intake for six days. On the seventh day, subjects consumed the experimental diet that was provided to them. The experimental diet was designed to be high in fat (68% total energy) and provide an energy excess (+78% kJ). High-fat foods were specifically chosen because individuals tend to overconsume more readily with high-fat foods due to the greater palatability and the higher energy density of this macronutrient, and because individuals who binge eat are known to selectively increase their intake of such foods [7]. Individual diet plans were designed using NetWISP nutrition software (Tinuviel Software Ltd., Llanfechell, Anglesey, UK). All foods were purchased and prepared by the research team. Subjects were instructed to consume all food provided, and to avoid consuming additional food or nutritive beverages. Food intake followed a normal daily feeding pattern (i.e., breakfast, lunch, dinner, and snacks) and water intake was allowed ad libitum throughout the dietary intervention. An example diet plan for one subject can be viewed in the supplementary material online. No subjects reported any issues with dietary adherence. The next day (Day 8), subjects returned to the laboratory for a second OGTT.

On the experimental days (before (Day 0) and after overfeeding (Day 8)), subjects reported to the laboratory between 07.00 and 09.00 h after an overnight fast of at least 10 h and having refrained from physical activity for 48 h. After being weighed, a 20-gauge Teflon catheter (Venflon, Becton, Dickinson, Plymouth, UK) was inserted into an antecubital vein of an arm to allow for repeated blood sampling during the 2 h OGTT. A baseline (fasted (Time 0)) blood sample was taken and then subjects consumed a 25% glucose solution (75 g of glucose dissolved in 300 mL of water). Blood samples were then taken at 15, 30, 45, 60, 90, and 120 min after glucose ingestion.

Plasma glucose and serum insulin concentrations obtained before and during the OGTT were used to determine whole-body insulin sensitivity using the Matsuda insulin sensitivity index (ISI): where FPG is the fasting plasma glucose concentration; FSI is the fasting serum insulin concentration; and 10,000 represents a constant that allows numbers ranging between 1 and 12 to be obtained. The square root conversion is used to correct the nonlinear distribution of values [31]. Area under the curve (AUC) for glucose and insulin was calculated using the trapezoidal rule.

Data are presented as means ± standard error of the mean (SEM). Statistical analysis was performed using SPSS (V21.0) for windows (SPSS Inc., Chicago, IL, USA). Fasting concentrations of glucose, insulin, NEFA, and TG before and after high-fat overfeeding were compared using a paired t-test, whereas the dynamic hormonal and metabolic responses to the OGTT were compared using a two-way (trial × time) repeated measures analysis of variance (ANOVA) and Bonferroni post hoc analysis where appropriate. Statistical significance was set at p < 0.05.

The estimated energy requirement, actual energy intake, macronutrient intake, and fatty acid composition of the one-day high-fat overfeeding intervention are shown in Table 1. An example diet plan for one of the subjects can be seen in the supplementary material available online.

In conclusion, our pilot data strongly suggest that replicating excessive binge eating behavior through a single day of high-fat overfeeding is sufficient to impair whole-body insulin sensitivity in young, healthy individuals. Further research is required to elucidate the mechanisms underpinning this response and establish whether these effects persist after returning to normal eating behavior and/or whether repeated periods of binge eating leads to a progressive worsening of glycemic control. Based on our data, it is plausible to suggest that the metabolic effects of binge eating may have more marked effects in individuals at risk of insulin resistance or the metabolic syndrome.

The cost of consumables and analysis was covered by the lead investigators own institutional research budget. 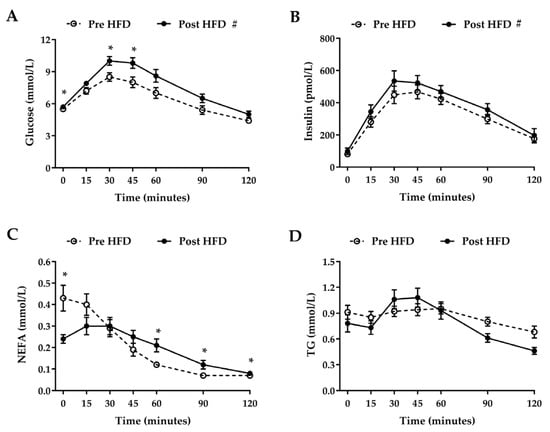 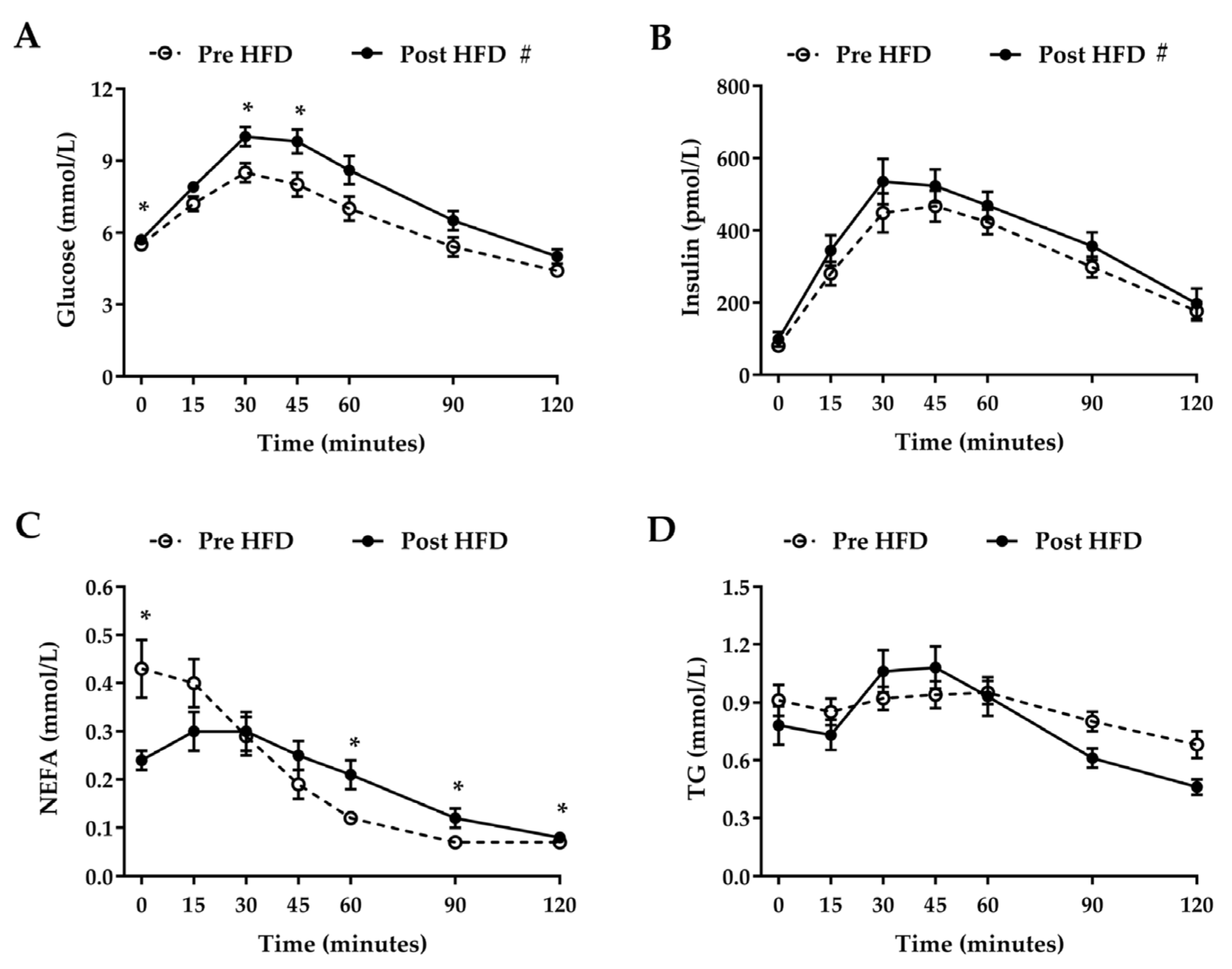