Influence of Hesperidin on the Systemic and Intestinal Rat Immune Response

Polyphenols, widely found in edible plants, influence the immune system. Nevertheless, the immunomodulatory properties of hesperidin, the predominant flavanone in oranges, have not been deeply studied. To establish the effect of hesperidin on in vivo immune response, two different conditions of immune system stimulations in Lewis rats were applied. In the first experimental design, rats were intraperitoneally immunized with ovalbumin (OVA) plus Bordetella pertussis toxin and alum as the adjuvants, and orally given 100 or 200 mg/kg hesperidin. In the second experimental design, rats were orally sensitized with OVA together with cholera toxin and fed a diet containing 0.5% hesperidin. In the first approach, hesperidin administration changed mesenteric lymph node lymphocyte (MLNL) composition, increasing the TCRαβ+ cell percentage and decreasing that of B lymphocytes. Furthermore, hesperidin enhanced the interferon (IFN)-γ production in stimulated MLNL. In the second approach, hesperidin intake modified the lymphocyte composition in the intestinal epithelium (TCRγδ+ cells) and the lamina propria (TCRγδ+, CD45RA+, natural killer, natural killer T, TCRαβ+CD4+, and TCRαβ+CD8+ cells). Nevertheless, hesperidin did not modify the level of serum anti-OVA antibodies in either study. In conclusion, hesperidin does possess immunoregulatory properties in the intestinal immune response, but this effect is not able to influence the synthesis of specific antibodies. View Full-Text
Keywords: antibody; flavanone; flavonoids; hesperidin; immune system; immunoregulatory; polyphenol antibody; flavanone; flavonoids; hesperidin; immune system; immunoregulatory; polyphenol
►▼ Show Figures 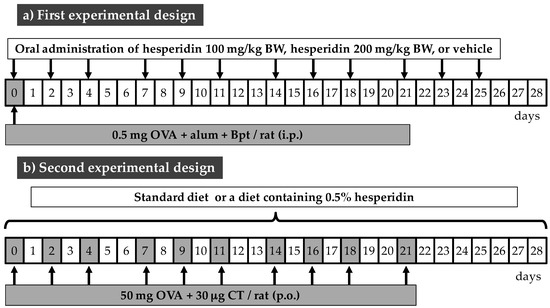