Comparing the Nutritional Impact of Dietary Strategies to Reduce Discretionary Choice Intake in the Australian Adult Population: A Simulation Modelling Study
Next Article in Special Issue

Association of Polyphenol Biomarkers with Cardiovascular Disease and Mortality Risk: A Systematic Review and Meta-Analysis of Observational Studies

Overweight and obesity have been steadily increasing in recent years and currently represent a serious threat to public health. Few human studies have investigated the relationship between polyphenol intake and body weight. Our aim was to assess the relationship between urinary polyphenol levels and body weight. A cross-sectional study was performed with 573 participants from the PREDIMED (Prevención con Dieta Mediterránea) trial (ISRCTN35739639). Total polyphenol levels were measured by a reliable biomarker, total urinary polyphenol excretion (TPE), determined by the Folin-Ciocalteu method in urine samples. Participants were categorized into five groups according to their TPE at the fifth year. Multiple linear regression models were used to assess the relationships between TPE and obesity parameters; body weight (BW), body mass index (BMI), waist circumference (WC), and waist-to-height ratio (WHtR). After a five years follow up, significant inverse correlations were observed between TPE at the 5th year and BW (β = −1.004; 95% CI: −1.634 to −0.375, p = 0.002), BMI (β = −0.320; 95% CI: −0.541 to −0.098, p = 0.005), WC (β = −0.742; 95% CI: −1.326 to −0.158, p = 0.013), and WHtR (β = −0.408; 95% CI: −0.788 to −0.028, p = 0.036) after adjustments for potential confounders. To conclude, a greater polyphenol intake may thus contribute to reducing body weight in elderly people at high cardiovascular risk.
Keywords: overweight; obesity; polyphenol; urine; PREDIMED overweight; obesity; polyphenol; urine; PREDIMED

Overweight and obesity have been steadily increasing in recent years and currently represent a serious threat to public health [1]. In 2014, more than 1.9 billion adults were overweight worldwide, and of these over 600 million were obese [2]. With nearly three million adults dying each year as a result of being overweight or obese, the impact of obesity on morbidity, mortality, and health care costs is very high [3]. Lifestyle and dietary habits are key determinants in the prevalence of obesity [4,5,6].
Polyphenols, the most abundant antioxidants in nature, are widely distributed in plant-derived foods such as vegetables, fruits, seeds, coffee, wine, and tea [7]. Only a few human studies have reported a relationship between polyphenol intake and body weight, even though obesity is considered a major independent risk factor for various chronic diseases [8,9]. Evidence for the effects of polyphenols on obesity parameters in humans is inconsistent, possibly due to divergence among study designs, characteristics of the participants, and metabolic pathways. Although some intervention clinical trials with polyphenol-enriched food or polyphenol extracts do not show any effect on weight or waist circumference [10,11,12], other studies have reported that polyphenols reduce body weight and increase energy expenditure [13,14,15,16]. The oral bioavailability of polyphenols is particularly important because, after being modified and metabolized by enzymes, their concentration in tissues and biological fluids is quite low [9,12,15,17]. There is therefore a need for a biomarker to accurately reflect polyphenol concentration after their absorption and metabolism.
Polyphenol plasma levels or total urinary polyphenol excretion, considered in recent years as a reliable biomarker of total polyphenol intake, has been correlated with dietary polyphenol intake, and has been applied to explore associations between polyphenol intake and several chronic disease risk parameters [18,19,20,21]. Thus, the objective of the current study was to assess the associations between total polyphenol intake, measured by total urinary polyphenol excretion (TPE), and obesity parameters in an elderly population at high cardiovascular risk after five years of follow up.

The protocol for this trial and supporting Strengthening the Reporting of Observational studies in Epidemiology (STROBE) checklist are available as supporting information.

All participants provided informed consent. The Institutional Review Board (IRB) of the Hospital Clinic (Barcelona, Spain), accredited by the US Department of Health and Human Services (DHHS) update for Federal wide Assurance for the Protection of Human Subjects for International (Non-US) Institutions #00000738, approved the study protocol on 16 July 2002. The authors confirm that all ongoing and related trials for this drug/intervention are carried out following the rules of the Declaration of Helsinki of 1975 and registered (ISRCTN35739639).

Participants were drawn from the PREDIMED Study (‘Prevención con Dieta Mediterránea’ (Prevention with the Mediterranean Diet), ISRCTN35739639). The information in the registry was delayed after recruitment began, to be sure about the feasibility of the study protocol; we started the trial as a ‘pilot study’ on October 2003, and, once we were sure that the intervention protocol worked, we decided to submit the study protocol for registration (date of application: 2 September 2005). The protocol and recruitment method are reported in detail elsewhere [22].
The present study looks at 573 participants that were recruited in two centers, the Clinic Hospital of Barcelona and the University of Valencia, both in Spain, and all were followed-up after more than five years. The period of recruitment was from 2003 to 2006, and the average follow up was 5.9 years.

The selected participants were asked to complete some questionnaires: a validated 137-item food frequency questionnaire (FFQ) to assess dietary habits [23]; a 47-item general questionnaire aimed to summarize information about lifestyle, health condition, education, history of illnesses, and medication use; a 14 point questionnaire evaluating the degree of adherence to the Mediterranean diet [24]; and a validated Spanish version of the Minnesota Leisure-Time Physical Activity Questionnaire to record physical activity [25]. Nutrient intake was adjusted by calories using the residual method [26]. All questionnaires were administered and repeated yearly during the follow up by trained staff in face-to-face interviews.

Spot urine samples from the participants were collected and coded at the clinic by a technician and then immediately shipped to a central laboratory to be stored at −80 °C until analyzed.

The Folin-Ciocalteu method was applied to determine the content of TPE, using a clean-up procedure with solid phase extraction (SPE) performed in 96-well plate cartridges (Oasis MAX), which helped to remove urinary interferences. Finally, TPE was expressed as milligrams of gallic acid equivalent (GAE)/g of creatinine. All details have been previously described by Medina-Remón et al. [19].

Weight and height were measured with calibrated scales and a wall-mounted stadiometer, respectively. Body mass index (BMI) was calculated as weight in kilograms divided by the square of height in meters. Waist circumference (WC) was measured midway between the lowest rib and the iliac crest. Waist-to-height ratio (WHtR) was calculated as the waist in centimeters divided by the height in meters. Blood pressure was determined in triplicate using a validated semi-automatic sphygmomanometer (Omron HEM-705CP, Tokyo, Japan) by trained nurses. Measurements were taken at three time points, separated by 2 min, while the participant was in a seated position after 5 min of rest [27]. Obesity is defined as BMI more than 30 kg/m2.

Results were expressed as mean ± SD for continuous variables or percentages for categorical variables. Kolmogorov and Levene tests were applied to examine the normality distribution and skewness. All participants, including total subjects, males, and females were divided into five categories according to their TPE at the fifth year of follow up. Changes in nutrient intakes and key food consumption according to the FFQs were assessed with yearly repeated-measures analysis during the follow up period. A Bonferroni post-hoc test and paired t-test were used to compare each variable within and between groups.
Multiple linear regression models were used to assess the relationship between anthropometric parameters (Body weight (BW), BMI, WC, and WHtR) and quintiles of TPE at the fifth year, adjusted for potential confounders, including sex, age, intervention groups, smoking status (never, current, former), family history of coronary heart disease (CHD), physical activity, hypertension, diabetes, dyslipidemia, marital status (single, married, widowed), education level (primary school, high school, university), medication used (antihypertensive drugs, vitamins, insulin, oral hypoglycemic drugs, aspirin, or other antiplatelet drug supplements taken in the last month), recruitment centers, 14 unit Mediterranean diet score, and energy intake at baseline. Multiple logistic regression analyses were used to calculate the odds ratio (OR) for quintiles of TPE and obesity (BMI > 30 kg/m2). Models were adjusted for potential confounders as in linear regression analyses.
All analyses were performed using SPSS software V21.0 (SPSS Inc., Chicago, IL, USA,). All models were tested for the detection of outliers, multicollinearity, homoscedasticity, and normality and independence of errors. All statistical tests were two-tailed, and the significance level was p < 0.05. The detailed information of the participants is available as supporting information.

In summary, with five years of follow up, the present study shows that polyphenol levels expressed as TPE in urine were inversely associated with BW, BMI, WC, and WHtR in an elderly population at high cardiovascular risk. Therefore, we confirmed that a long-term polyphenol-rich diet contributes to body weight loss, which can offer protection from several chronic diseases. For future research, similar studies should be conducted in the general population, and specific mechanisms need to be explored by further clinical trials.

We thank all the participants of the PREDIMED study. This work was supported in part by CICYT (AGL2016-79113-R), the Instituto de Salud Carlos III, ISCIII (CIBEROBN) from the Spanish Ministry of Economy and Competivity (MEC), and Generalitat de Catalunya (GC) 2014 SGR 773. X.G. received support from China Scholarship Council (CSC). Alexander Medina-Remón thanks the ‘Juan de la Cierva’ postdoctoral program (JCI-2012-13463) from MEC. 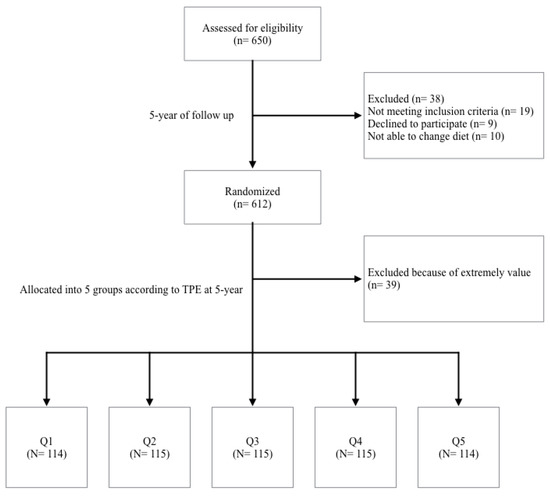