:
Dietary strategies to reduce discretionary choice intake are commonly utilized in practice, but evidence on their relative efficacy is lacking. The aim was to compare the potential impact on nutritional intake of three strategies to reducing discretionary choices intake in the Australian adult (19–90 years) population. Dietary simulation modelling using data from the National Nutrition and Physical Activity Survey 2011–2012 was conducted (n = 9341; one 24 h dietary recall). Strategies modelled were: moderation (reduce discretionary choices by 50%, with 0%, 25% or 75% energy compensation); substitution (replace 50% of discretionary choices with core choices); reformulation (replace 50% SFA with unsaturated fats, reduce added sugars by 25%, and reduce sodium by 20%). Compared to the base case (observed) intake, modelled intakes in the moderation scenario showed: −17.3% lower energy (sensitivity analyses, 25% energy compensation −14.2%; 75% energy compensation −8.0%), −20.9% lower SFA (−17.4%; −10.5%), −43.3% lower added sugars (−41.1%; −36.7%) and 17.7% lower sodium (−14.3%; −7.5%). Substitution with a range of core items, or with fruits, vegetables and core beverages only, resulted in similar changes in energy intake (−8.8% and −13.6%), SFA (−13.4% and −19.4%), added sugars (−41.7% and −42.7%) and sodium (−9.0% and −15.6%), respectively. Reformulating discretionary choices had minimal impact on reducing energy intake but reduced SFA (−10.3% to −30.9%), added sugars (−9.3% to −52.9%), and alcohol (−25.0% to −49.9%) and sodium (−3.3% to −13.2%). The substitution and reformulation scenarios minimized negative changes in fiber, protein and micronutrient intakes. While each strategy has strengths and limitations, substitution of discretionary choices with core foods and beverages may optimize the nutritional impact.
Keywords:
nutrition epidemiology; public health; computer modelling; dietary simulation; discretionary choices; dietary modification; dietary strategies; obesity prevention; chronic disease prevention; adults

Effective public health nutrition interventions are needed in response to the high prevalence of obesity and chronic diseases globally, and to address the gamut of health, social and economic costs [1,2]. Dietary Guidelines internationally emphasise the selection of nutrient-dense foods whilst limiting ‘discretionary choices’, i.e., foods and beverages that are higher in saturated fat, added sugars, salt and/or empty (nutrient-poor) kilojoules [1,3,4]. In the Australian diet, discretionary choices consistently contribute over one third of daily energy intake [5,6,7], with 98.3% of Australian children and adults consuming on average 34.6% of energy intake from discretionary choices in the most recent national survey [8]. Globally, national survey data shows similar trends, with 89% of US adults consuming discretionary foods [9]; discretionary foods (i.e., non-basic foods high in saturated fats and/or added sugars) contributing 26% to population total energy intake in Mexico [10]; while foods such as hot chips, processed meat, confectionery and soft drinks [11] and sweets and cookies [12] are the highest contributors to energy intake in the UK and Brazil, respectively. Further, diets higher in discretionary choices have been highlighted as less environmentally sustainable [13,14] and in some [15] but not all [16,17] studies were found to be less affordable than healthier diets. Reducing population intakes of discretionary choices is likely to benefit diet quality, health, environmental sustainability and social equity agendas [1].
While policy-based interventions often target discretionary choices [18,19,20], the evidence base on the efficacy of the dietary strategies or nutrition messages underpinning these initiatives is lacking [21,22]. The need for rigorous evaluation of public health nutrition interventions notwithstanding, equally important is the need to use cost-effective and empirical evidence to guide the design of these initiatives or programs [23]. Dietary modelling provides a way to understand and predict behaviours in complex systems [22]. It can bridge the gap between research and policy, either prior to intervention testing or in situations where intervention studies are not feasible [24,25]. Simulation modelling is one form of dietary modelling in which a range of dietary strategies or scenarios can be tested or compared, forecasting via mathematical equations the hypothetical changes in dietary intakes [22]. Modelled estimates, using dietary simulation models, can provide important information to guide policy-based decisions on effective health resource utilisation, for example what dietary strategies or nutrition messages may be effective to take forward in development or testing of public health campaigns.
This paper examines the relative impact of three dietary approaches to reducing population discretionary choices intake: moderation, substitution and reformulation. Moderation targets a reduction in frequency of consumption or reduction in the package/portion size of discretionary choices which will have a direct impact on intakes of energy, saturated fat, added sugars and sodium. However, issues such as the impact on broader nutrient profile, and unintended consequences such as energy compensation have not often been considered in previous simulation studies [22,26]. Substituting or replacing discretionary choices with healthier alternatives may be a more feasible strategy that is likely to have a similar impact on saturated fat, added sugars and sodium intakes, however, the impact on overall nutrient profile has not generally been assessed [22,26]. Moreover, the net impact on energy intake when discretionary choices are replaced with alternative food and beverages has not been examined. Finally, reformulating selected components within food and drinks is appealing because it requires the least change in dietary behaviour. Reformulation of nutrients such as sodium (e.g., within canned foods), added sugars (e.g., within sugar-sweetened beverages) and fat (e.g., within dairy foods) has been widely studied [22,27,28,29,30], typically estimating small reductions at a population level and, at least for sodium, is achievable over the longer term. However, evaluating the impact of reformulation of multiple nutrients while considering feasibility in terms of food technology and consumer taste has rarely been done [21,22].
The current study builds on the gaps identified in the existing literature and models each dietary strategy (moderation, substitution, and reformulation) using the same dataset, with careful consideration of the scenario parameters, as well as considering key assumptions including energy compensation and the method of matching food and drink replacements. The aim of this study was to investigate and compare the relative potential impact of three approaches to reducing discretionary choices on the nutritional intake of the Australian adult population. This research is important to guide policy decisions regarding which set of nutritional messages should underpin policy levers and interventions to address poor dietary patterns in Western countries such as Australia.

The substitution dietary strategy has the best potential, at least theoretically, to reduce energy intake and less healthful nutrients such as SFA, added sugars and sodium whilst maintaining or improving protein, fiber and micronutrient intakes. Reformulated products may play a role in improving less healthful nutrient intakes where energy moderation is not a priority, but is unlikely to contribute to obesity prevention efforts. Future dietary modelling research could test the nutritional impact of a combination of dietary strategies, and whether the current findings are similar in sub-populations such as obese or disadvantaged groups. The present study can aid decision makers to prioritize and deliver policy interventions. While each strategy has strengths and limitations, substitution of discretionary choices with a range of core food appears to balance maximizing nutritional impact and ease of adoption in populations.

J.G. was supported by a National Health and Medical Research Council Program Grant (631947) and T.W. is supported by an Early Career Fellowship (1053359). The authors thank Malcolm Riley (Commonwealth Scientific and Industry Research Organisation) for his expert technical advice on the scenario construction and analysis approach.

R.G. and T.W. conceived the project and provided study oversight, and with J.G. and B.J. developed the research plan. J.G., T.W. and B.J. constructed the data sheets and conducted the analyses. All authors contributed to the manuscript preparation and R.G. had primary responsibility for final content. 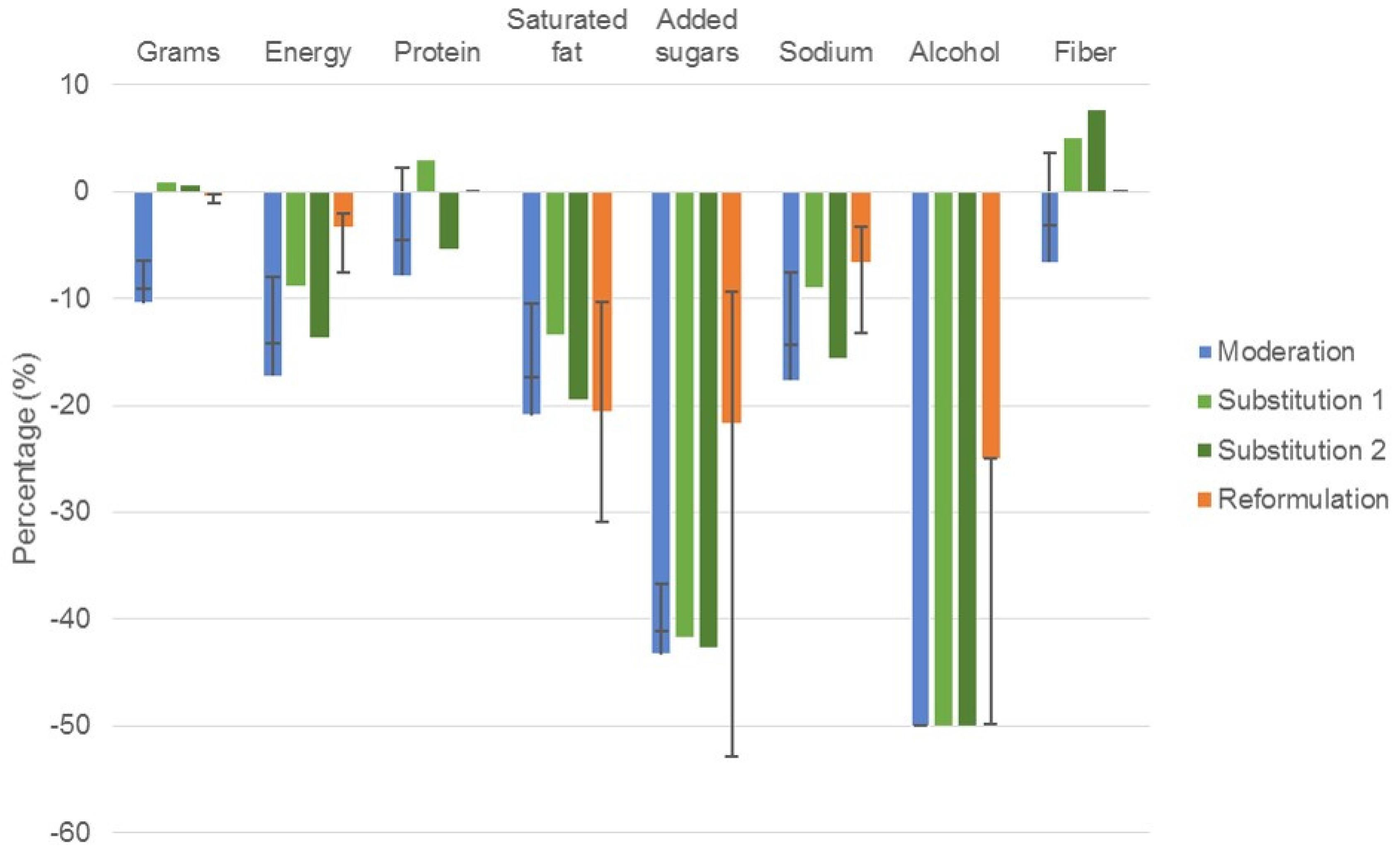 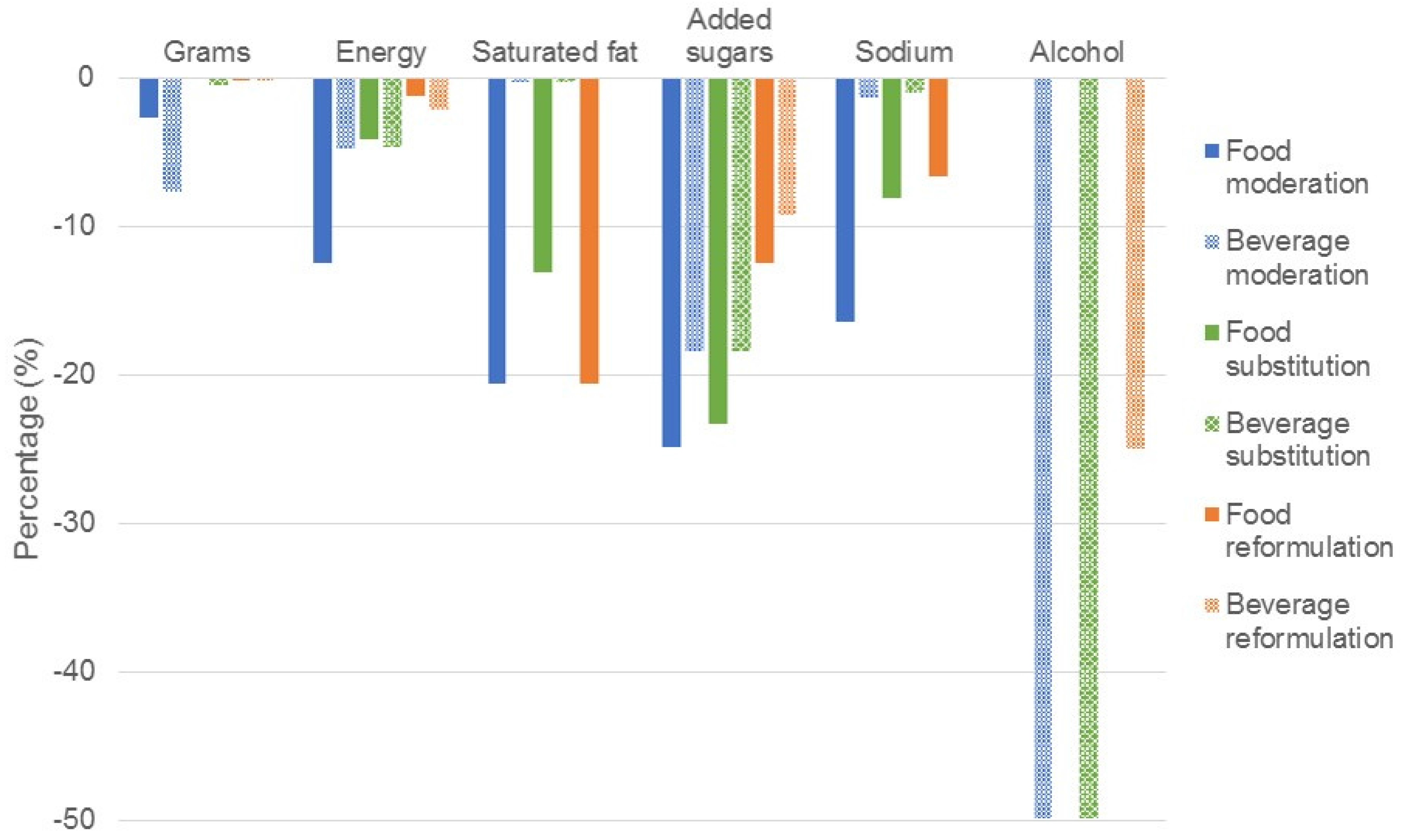