Time Trends and Patterns of Reported Egg Consumption in the U.S. by Sociodemographic Characteristics
Previous Article in Journal

Vascular endothelial growth factor (VEGF) has been suggested to play a role in the pathophysiology of polycystic ovary syndrome (PCOS) and may contribute to increased risk of ovarian hyperstimulation syndrome (OHSS) in affected individuals. Vitamin D (VitD) supplementation improves multiple clinical parameters in VitD-deficient women with PCOS and decreases VEGF levels in several other pathologic conditions. Unveiling the basic mechanisms underlying the beneficial effects of vitamin D on PCOS may enhance our understanding of the pathophysiology of this syndrome. It may also suggest a new treatment for PCOS that can improve it through the same mechanism as vitamin D and can be given regardless of vitamin D levels. Therefore, we aimed to explore the effect of VitD supplementation on serum VEGF levels and assess whether changes in VEGF correlate with an improvement in characteristic clinical abnormalities of PCOS. This is a randomized placebo-controlled trial conducted between October 2013 and March 2015. Sixty-eight VitD-deficient women with PCOS were recruited. Women received either 50,000 IU of oral VitD3 or placebo once weekly for 8 weeks. There was a significant decrease in serum VEGF levels (1106.4 ± 36.5 to 965.3 ± 42.7 pg·mL–1; p < 0.001) in the VitD group. Previously reported findings of this trial demonstrated a significant decrease in the intermenstrual intervals, Ferriman-Gallwey hirsutism score, and triglycerides following VitD supplementation. Interestingly, ∆VEGF was positively correlated with ∆triglycerides (R2 = 0.22; p = 0.02) following VitD supplementation. In conclusion, VitD replacement significantly decreases serum VEGF levels correlating with a decrease in triglycerides in women with PCOS. This is a novel molecular explanation for the beneficial effects of VitD treatment. It also suggests the need to investigate a potential role of VitD treatment in reducing the incidence or severity of OHSS in VitD-deficient women with PCOS. View Full-Text
Keywords: vitamin D; vascular endothelial growth factor; VEGF; polycystic ovary syndrome; PCOS vitamin D; vascular endothelial growth factor; VEGF; polycystic ovary syndrome; PCOS
►▼ Show Figures 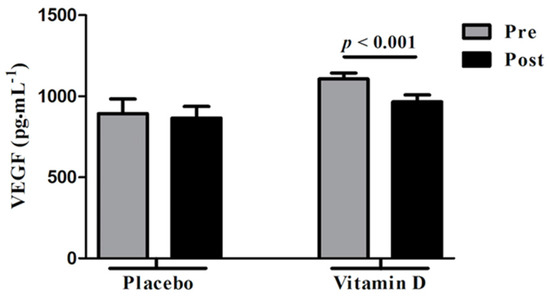