Micronutrient Dietary Intake in Latina Pregnant Adolescents and Its Association with Level of Depression, Stress, and Social Support

Many patients suspect wheat as being a major trigger of their irritable bowel syndrome (IBS) symptoms. Our aim was to evaluate whether sourdough wheat bread baked without baking improvers and using a long dough fermentation time (>12 h), would result in lower quantities of alpha-amylase/trypsin inhibitors (ATIs) and Fermentable, Oligo-, Di-, Mono-saccharides and Polyols (FODMAPs), and would be better tolerated than yeast-fermented wheat bread for subjects with IBS who have a poor subjective tolerance to wheat. The study was conducted as a randomised double-blind controlled 7-day study (n = 26). Tetrameric ATI structures were unravelled in both breads vs. baking flour, but the overall reduction in ATIs to their monomeric form was higher in the sourdough bread group. Sourdough bread was also lower in FODMAPs. However, no significant differences in gastrointestinal symptoms and markers of low-grade inflammation were found between the study breads. There were significantly more feelings of tiredness, joint symptoms, and decreased alertness when the participants ate the sourdough bread (p ≤ 0.03), but these results should be interpreted with caution. Our novel finding was that sourdough baking reduces the quantities of both ATIs and FODMAPs found in wheat. Nonetheless, the sourdough bread was not tolerated better than the yeast-fermented bread. View Full-Text
Keywords: irritable bowel syndrome; wheat sensitivity; gluten sensitivity; wheat; ATI; amylase trypsin inhibitor; FODMAP irritable bowel syndrome; wheat sensitivity; gluten sensitivity; wheat; ATI; amylase trypsin inhibitor; FODMAP
►▼ Show Figures 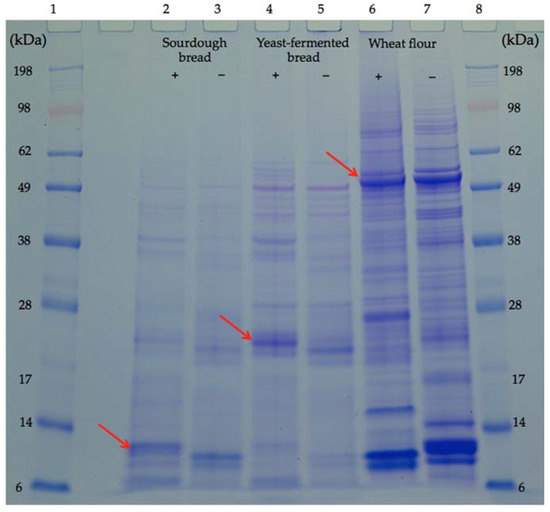