Nutrimiromics: Role of microRNAs and Nutrition in Modulating Inflammation and Chronic Diseases
Next Article in Special Issue

The stratum corneum of skin plays a barrier function that protects organisms from external stimuli and prevents water loss. Intercellular lipids in the stratum corneum, including ceramides, cholesterol and fatty acids, are important for maintaining skin barrier function. Ceramides are the most abundant, accounting for about 40% of all intercellular lipids [1]. The number of ceramides in skin is decreased in patients with atopic dermatitis and senile xerosis, and increasing the number of ceramides is important to maintaining healthy skin [2,3]. Oral administration of plant extracts from maize [4], rice [4], konjac [5] and sugar beet [6] that contain glucosylceramide (GlcCer), a ceramide precursor, or purified GlcCer has recently been reported to be effective in improving skin barrier function not only in a hairless mouse model [5,7,8], but also in humans [5,9].
The mechanism by which administered GlcCer improves skin barrier function is not entirely clear. However, sphingoid bases, as in vivo metabolites of GlcCer, have recently been reported to activate ceramide synthesis [7,10] promoting the formation of a cornified envelope [8], and increasing tight-junction function by induction of claudin-1 [11] in human keratinocytes. With regard to species of shingoid base, rice and maize GlcCer consist primarily of 8-cis-unsaturated bonds, such as d18:24t, 8t, d18:18c [12], while beet GlcCer consists primarily of 8-trans-unsaturated bonds, such as d18:24t, 8c, d18:18t, and t18:18t [13].
While there is no doubt about the effectiveness of GlcCer, it is not clear whether the potency of such plant extracts depends on GlcCer alone. In many cases, evaluated plant extracts have very low GlcCer contents and higher contents of other constituents. Furthermore, lipid constituents other than GlcCer present in plant extracts presumably differ considerably between plant species, plant parts (e.g., root, seeds), and method of extraction and purification. Therefore, improvement of skin barrier function by plant extracts may be related to the effects of other lipid constituents.
The present study aims to identify any differences between purified beet GlcCer and beet extract containing GlcCer and in terms of improving skin barrier function. Sugar beet is a raw material used for sugar production. The fibrous component remaining after extraction of water soluble sugar from the root is sugar beet fiber. By ethanol extraction of sugar beet fibers, beet extracts containing lipid mixtures including glucosylceramides, fatty acids and sterols can be produced as functional food materials.
This study compared differences in the effectiveness between purified GlcCer from beet extract (beet GlcCer) and beet extract containing equal amounts of GlcCer (beet extract) in preventing skin barrier dysfunction, namely, epidermal thickening, decreased stratum corneum ceramide content, increased transepidermal water loss (TEWL), and decreased stratum corneum water content, caused by UVB irradiation in hairless mice.

Test samples were suspended in purified water containing processed starch (starch sodium octenyl succinate) as emulsifier and 0.3 mL was orally administered to each mouse using a sonde every day for 14 days. All of the glucosylceramide samples were prepared on the day of administration.
A single dose of UVB (200 mJ/cm2) irradiation was applied to the back skin of each mouse using a Philips UVB lamp (TL20W/12 RS; Philips, Amsterdam, The Netherlands) at day 7 after the first administration (only one time irradiation of UVB). Collection of stratum corneum and dorsal skin sections from half of the mice was performed under anesthesia at day 3 after UVB irradiation. Table 2 shows the experimental schedule of this manuscript.

2.4. Measurement of Water Contents of Stratum Corneum, and TEWL

Water contents of stratum corneum and TEWL in the back skin of mice were measured daily for 14 days. Water contents of the stratum corneum were measured with a Corneometer (Courage & Khazaka, Cologne, Germany) and TEWL was assessed using a VAPO SCAN AS-VT100 RS (Asahi Techno Lab., Ltd., Yokohama, Kanagawa, Japan). Corneometer and VAPO SCAN data are given in terms of indicated arbitrary units (AU) and g/m2/h, respectively.

After application of anesthesia, cyanoacrylate adhesive was dropped onto slide glass, and this was adhered to the murine back skin for one minute. Slide glass was removed to collect stratum corneum sample [2].

The slide glass used to collect stratum corneum was soaked in hexane and ethanol (95:5), and was sonicated at 37 °C for 20 min. After filtering the solution, it was dried under nitrogen gas. The residue was added to 100 μL of chloroform:methanol (2:1). Briefly, stratum corneum samples were soaked in 4 mL of chloroform:methanol (2:1 v/v) and sonicated (70 W, 10 min) with a probe-type sonicator (Sonifire B-12; Branson Ultrasonics, Danbury, CT, USA). The ceramide extracted solution was dried under nitrogen gas, and was resolved in 0.4 mL of chloroform:methanol (2:1 v/v). Various ceramide extracts were separated using an HPTLC plate (Silica Gel 60; Merck, Darmstadt, Germany). HPTLC was developed twice with chloroform:methanol:acetic acid = 190:9:1 (v/v). Ceramide molecules were visualized by treatment with 10% CuSO4, 8% H3PO4 aqueous solution, and heating to 180 °C for 10 min. The amounts of various types of ceramide (ceramide NS, NP, AS and AP) were quantitatively determined using a densitometer.

The slide glass used to collect the stratum corneum was soaked in N, N, dimethylformamide, and was sonicated for 15 min. The sonicated solution was passed through a filter that was weighed beforehand. The filter was dried for one week under vacuum. After dryness, the filter weighed again, and difference between the before and after measurements was taken as the stratum corneum mass.

Thickness of the epidermis was measured at the horizontal midpoint of each visual field. Approximately 50 individual measurements were made along the wound margin for each histological section, and mean thickness was evaluated.

Figure 1 shows the body weight changes in UVB-irradiated mice. Body weight did not change in any groups after oral administration of beet GlcCer or beet extract.

3.3. Comparison of Ceramide Contents in Stratum Corneum among Mouse Groups

This study showed that oral administration of purified GlcCer from beets was effective in preventing epidermal thickening and decreased stratum corneum ceramide content caused by UVB irradiation in hairless mice. In addition, administration of beet extract containing an equal amount of glucosyl ceramides was more effective than beet GlcCer in improving increased TEWL and decreased stratum corneum water content.
Initially, examination of skin sections on day 3 after UVB irradiation showed epidermal hyperplasia in controls. Epidermal thickness increased 4-fold when compared to the normal group. However, in the beet GlcCer group, epidermal thickness decreased to 50% when compared with controls. In the beet extract group, epidermal thickness decreased to the same degree as in the beet GlcCer group. These findings strongly suggest that inhibition of epidermal hyperplasia was due to the effects of orally administered GlcCer. Inhibition of epidermal hyperplasia by beet extract [6] and purified GlcCer from corn extract has previously been reported in a hairless mouse model of skin barrier impairment induced by an Mg-deficient HR-AD diet [7]. Our study found that beet GlcCer was also effective in preventing epidermal hyperplasia induced by UVB irradiation.
Ceramides, which account for about 40% of intercellular lipids in the stratum corneum, are important in skin barrier function [1,2,3]. A recent study found that UVB irradiation decreased skin ceramide content and increased ceramidase gene expression [14]. With oral administration of purified GlcCer from plant extracts to hairless mice fed an HR-AD diet, a 2-fold increase in epidermal ceramide synthase gene expression has also been reported [7]. Because of these previous findings, we decided to focus on stratum corneum ceramide content. In our study, we analyzed stratum corneum content of ceramides NS, NP, AS and AP, for which ceramide standards were available. The results showed a decrease in all measured ceramides at 3 days after UVB irradiation, but with oral administration of beet GlcCer, all of these decreases were reduced. Moreover, similar levels of stratum corneum ceramide content were seen in both the beet GlcCer group and the beet extract group, thus strongly suggesting that GlcCer in the beet extract contributed to these observed effects.
Haratake et al. reported epidermal cell hyperplasia followed by increased TEWL in UVB-irradiated hairless mice [15]. The increase in TEWL was reduced by DNA synthesis inhibitors, and they concluded that epidermal hyperproliferation was associated with the epidermal barrier disturbance [15]. TEWL reflects water loss from the body and is commonly used a parameter of skin barrier function. In our study, epidermal hyperplasia and increased TEWL were observed in the control group at 3 days after UVB irradiation. The effectiveness of purified GlcCer from plants in preventing TEWL has previously been reported in a hairless mouse model with barrier perturbation induced by single-dose UVB irradiation [8], in a hairless mouse model with sodium dodecyl sulfate-induced skin roughness [5], in a Mg-deficient diet-induced atopic dermatitis-like model [7], and in a tape-stripped injured skin mouse model with regard to GlcCer from konjac and maize [7]. However, there are few reports on GlcCer from beet. Haruta-Ono et al. reported on orally administered of sphingomyelin to the improvement of epidermal function in hairless mice [16]. TEWL and stratum corneum water content of sphingomyelin-administered mice showed better values than the control group. Ceramide also increased. From these results, oral application of GlcCer and sphingomyelin may have a good effect on epidermal function.
In our study, although TEWL was slightly lower in the beet GlcCer group when compared with the control group, the difference was not statistically significant. Interestingly, however, oral administration of beet extract containing an equal amount of GlcCer, when compared to the control group, significantly reduced the increase in TEWL caused by UVB irradiation. In addition, there was earlier recovery of decreased stratum corneum water content. These results strongly suggest that constituents other than GlcCer in beet extract help protect against or restore UVB irradiation-induced skin barrier dysfunction.
For example, beet-derived steryl glycosides, phytosterols and free fatty acids are present in beet extracts (described in Materials and Methods). Recent studies have reported that steryl glycosides and phytosterols inhibit UVB irradiation-induced inflammatory reactions (cytokines, matrix metalloproteinase production) in skin cells [17,18]. In UVB-irradiated skin tissue, inflammatory cytokines and chemokines such as IL-1α, TNFα and IL-8 are released from keratinocytes [19,20,21]. This is followed by activated lymphocyte infiltration into skin tissue, leading to an inflammatory reaction. Oral administration of beet extract may reduce skin barrier dysfunction after UVB irradiation more so than administration of GlcCer alone because phytosterols in beet extract prevent expansion of the inflammatory reaction in skin tissue after UVB irradiation. Confirmation of this hypothesis will require further studies.

Y.T. designed the research, N.M., S.U. and H.F. performed the experiments, Y.T. and N.M. analyzed the data, and Y.T. wrote the manuscript. All authors have read and approved the final manuscript. 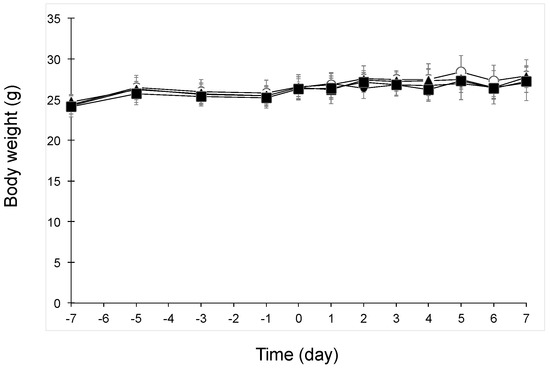 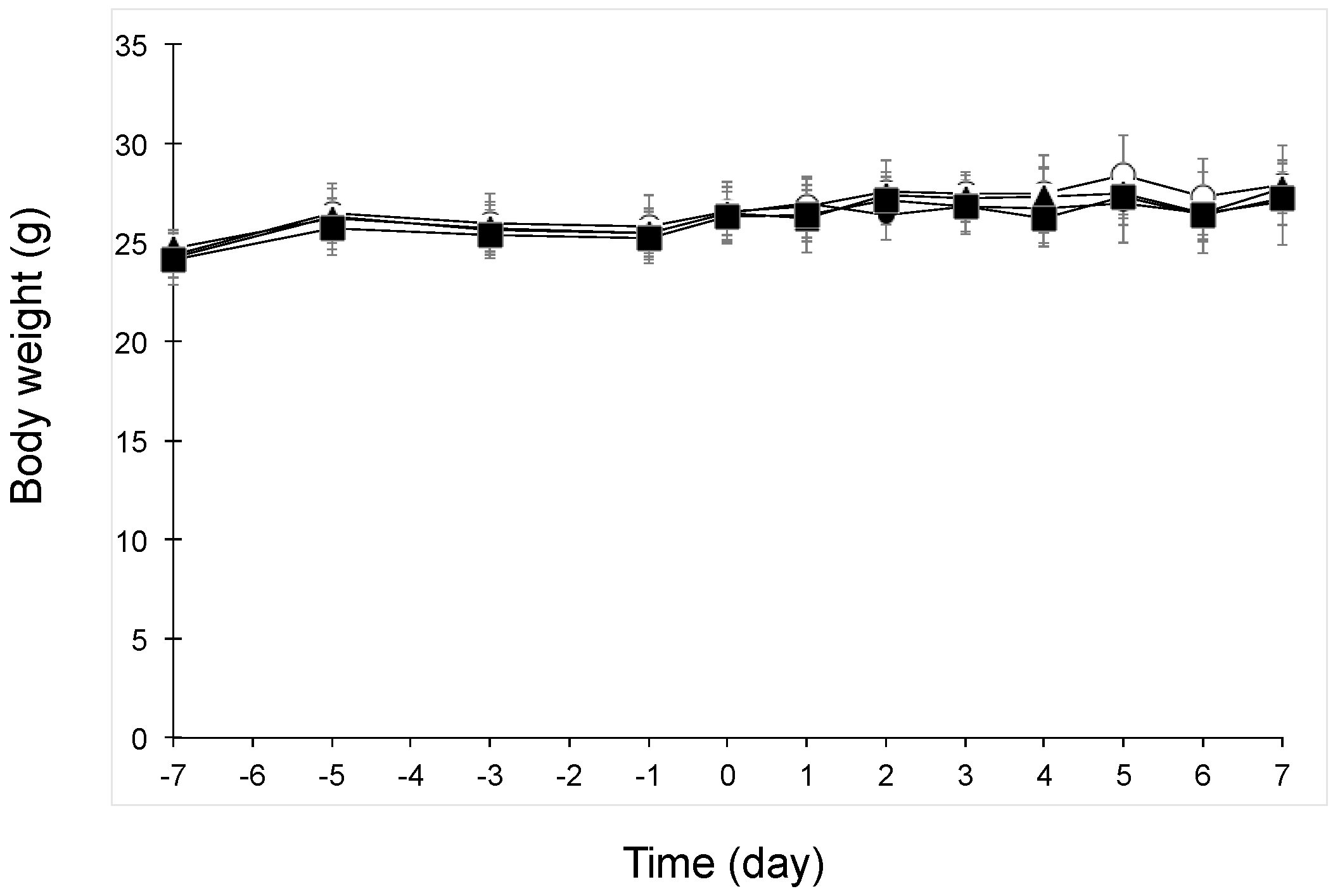 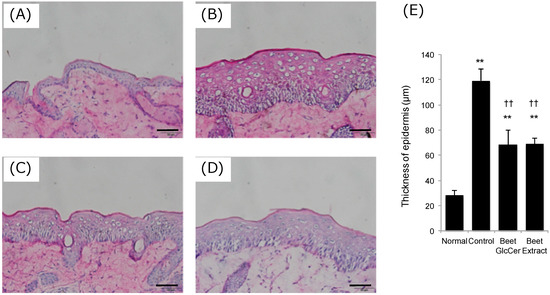 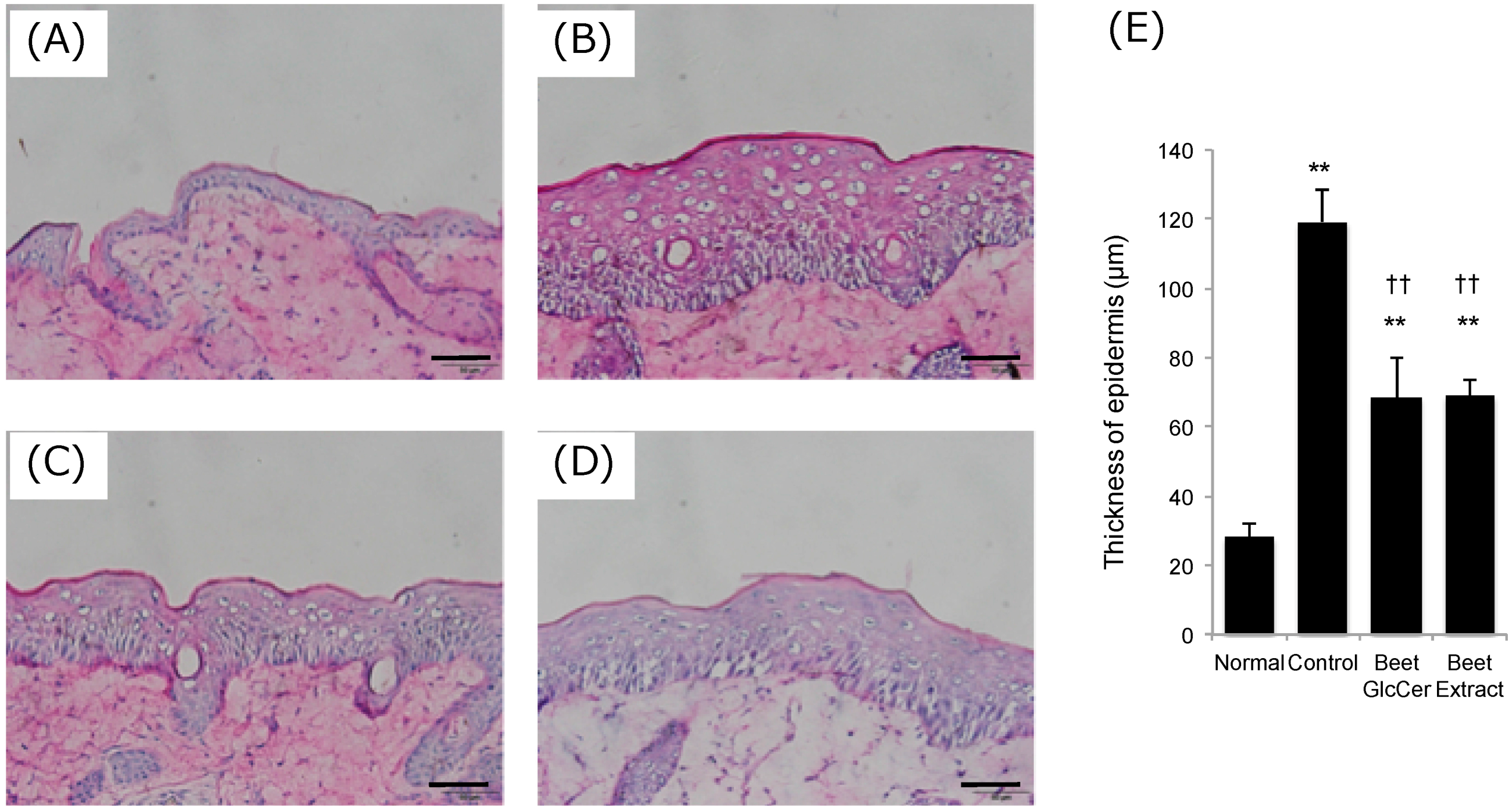 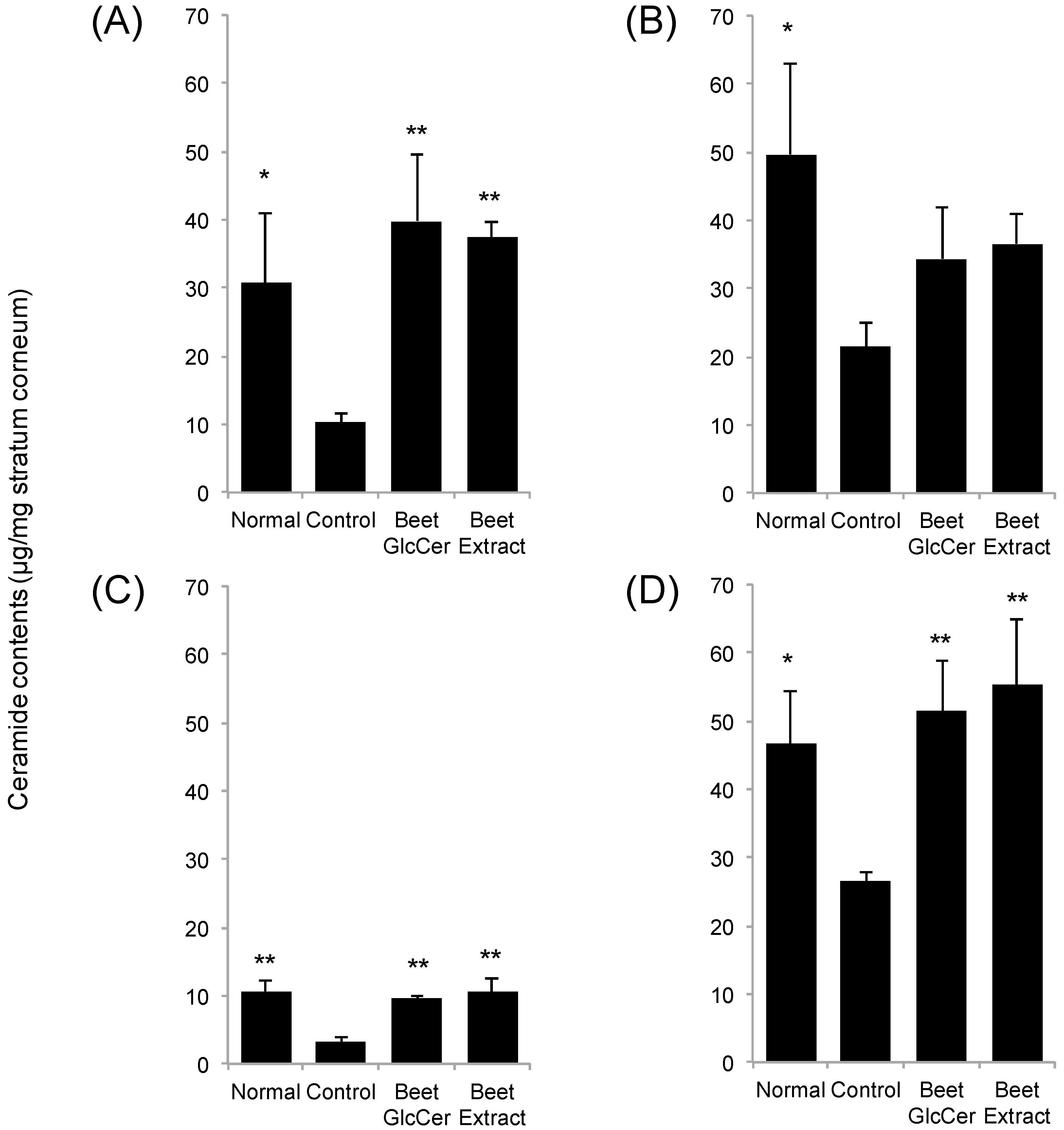 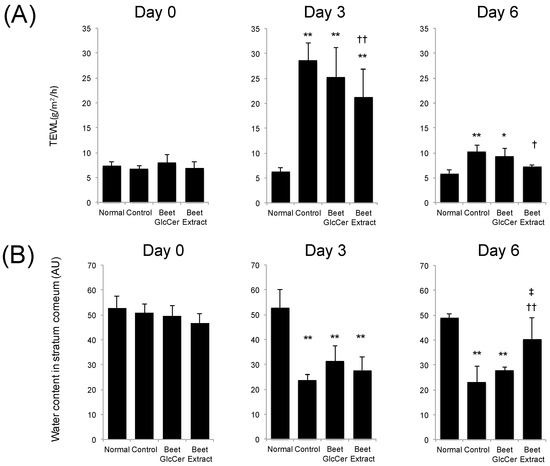 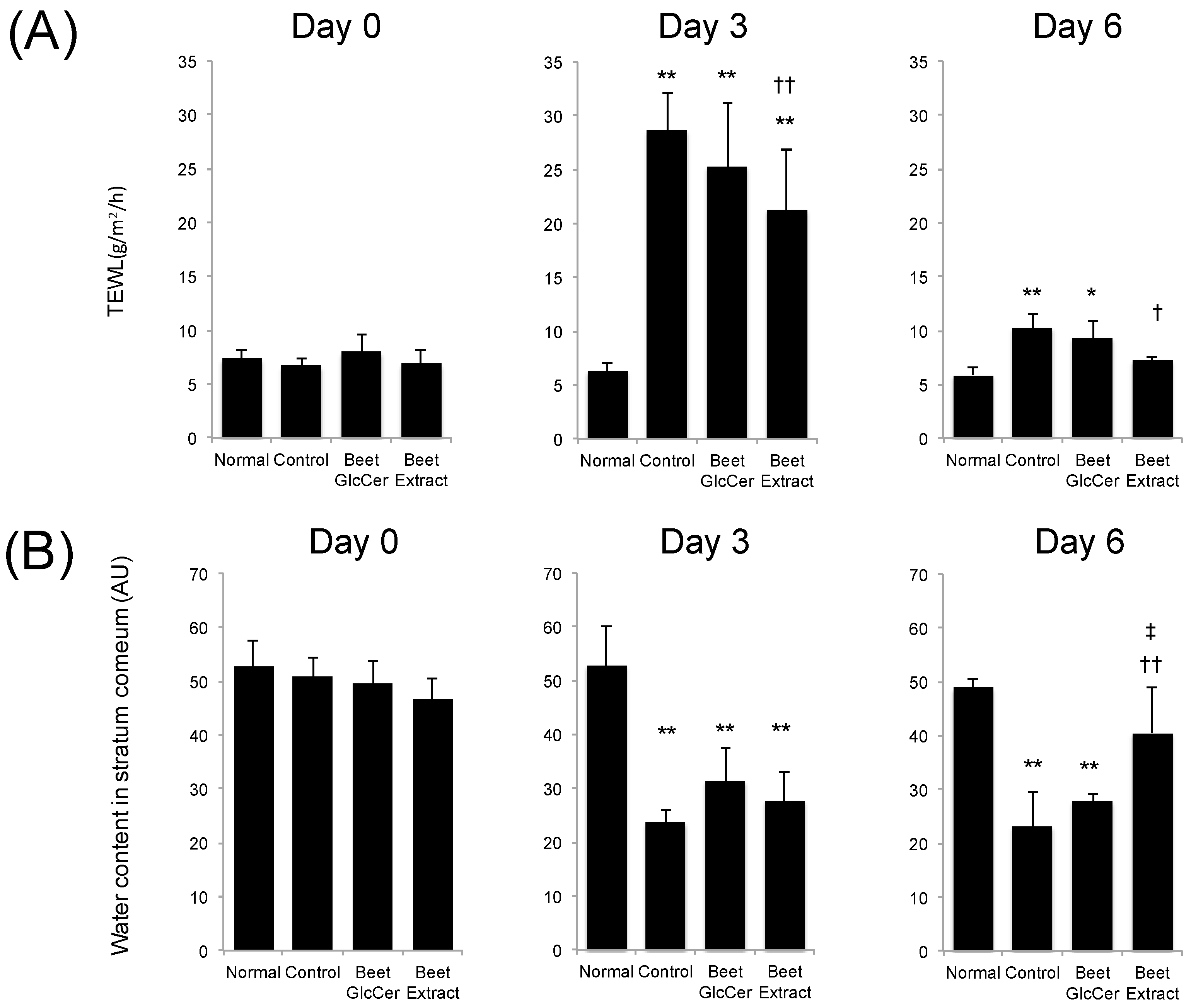 Table 2. Experimental schedule (d: day).
Table 2. Experimental schedule (d: day).
© 2017 by the authors. Licensee MDPI, Basel, Switzerland. This article is an open access article distributed under the terms and conditions of the Creative Commons Attribution (CC BY) license (http://creativecommons.org/licenses/by/4.0/).
We use cookies on our website to ensure you get the best experience. Read more about our cookies here.
Accept
We have just recently launched a new version of our website. Help us to further improve by taking part in this short 5 minute survey here. here.
Never show this again