Micronutrient Status and Dietary Intake of Iron, Vitamin A, Iodine, Folate and Zinc in Women of Reproductive Age and Pregnant Women in Ethiopia, Kenya, Nigeria and South Africa: A Systematic Review of Data from 2005 to 2015
Previous Article in Journal

Association of Sun Exposure, Skin Colour and Body Mass Index with Vitamin D Status in Individuals Who Are Morbidly Obese

Glycemic Response to Black Beans and Chickpeas as Part of a Rice Meal: A Randomized Cross-Over Trial

Legumes, such as black beans (Phaseolus vulgaris L.) and chickpeas (Cicer arietinum L.), have a low glycemic index, and may reduce the glycemic load of meals in which they are included. Although the low glycemic response of beans consumed alone has been documented, few studies have examined the glycemic response to traditional food combinations such as black beans and rice or chickpeas and rice. This randomized cross-over study examined the glycemic and insulinemic impact of 50 grams of available carbohydrate from three test meals: plain white rice (control), black beans with rice, and chickpeas with rice among healthy adult women (n = 12, 18–65 years). Treatments were consumed on different mornings, a minimum of 7 days apart. Blood samples were collected at time 0 (fasting), and at 30, 60, 90, and 120 min postprandial, and were subsequently analyzed for glucose and insulin concentrations. Glucose response based on the incremental area under the curve showed a significant difference by treatment (p = 0.027). Changes in blood glucose concentrations were significantly different for the black bean meal and the chickpea meal in comparison to rice alone at 60 min (p = 0.026 and p = 0.024), 90 min (p = 0.001 and p = 0.012) and 120 min post prandial (p = 0.024; black bean meal). Findings indicate that combinations of black beans and chickpeas with white rice improve glycemic response, providing evidence that has promising implications for dietary guidance to reduce postprandial glucose and related health risks through traditional food patterns.
Keywords: legumes; pulses; beans; glycemic response; blood glucose; post-prandial; insulin; insulin response legumes; pulses; beans; glycemic response; blood glucose; post-prandial; insulin; insulin response

Adult women, aged 18–65 years, were recruited from the greater metropolitan Phoenix area to participate in the 3 × 3 randomized cross-over trial. Exclusion criteria included physician diagnosis of type 1 or type 2 diabetes, behaviors or health conditions known to influence glucose or insulin concentrations (e.g., smoking, gastrointestinal conditions, BMI ≤ 19 or ≥ 35 kg/m2, weight changes ±5 kg within 6 months, current pregnancy or breastfeeding), or allergy to beans or latex. Participants were also excluded if they were currently taking medications known to affect glucose or insulin concentrations. Habitual consumption of medications not known to impact glucose or insulin metabolism was permitted if the participant was on the current treatment dosage for >6 months and dosage was not altered during the study period. The study protocol was approved by the Bioscience Committee of the Institutional Review Board at Arizona State University (Human Subjects Protocol Number 0712002492) and all participants provided written, informed consent. Twenty-one individuals (19 women, 4 men) were screened for the study. Due to the potential for sex-related confounding in metabolism and body size, and insufficient enrollment of men for adequate statistical comparison, male participants were excluded from the study. Of the 19 eligible women, 6 declined to participate and 13 were enrolled in the study. One participant completed one test day, but declined to continue the study for personal reasons. Three women completed two test days and 9 women completed all three test days.

This randomized cross-over study included three treatments: (1) white rice (control); (2) black beans and white rice; and (3) chickpeas and white rice. Test meals were consumed on different mornings at least one week apart. Treatments were portioned by gram weight and contained equal available carbohydrate content of 50 g. Black beans and chickpeas have similar carbohydrate content per gram weight despite being different legume species [22].
During the three days prior to testing, participants were asked to consume one white, plain bagel (56 g carbohydrate) each day to ensure adequate carbohydrate consumption minimize influence of glycogen depletion on postprandial glucose. Participants selected a pre-testing evening meal consisting of a commercially produced submarine sandwich, potato chips, and cookie consumed with water. Participants were required to consume the same evening meal the night before each test day. Evening meal standardization was conducted to avoid confounding from the second meal effect [41]. After consuming the provided meal on the eve of testing, participants were required to fast and to drink only plain water until they arrived at the study location 12 h later. Participants were also asked to refrain from alcohol consumption and light, moderate, or heavy activity for 24 h prior to testing.
Upon arrival at the test site, participants were confirmed to be fasting and compliant with study procedures. Participants were weighed in light clothing, without shoes, using a digital scale (Seca Model 880; SECA, Hamburg, Germany). Height was assessed using a wall-mounted stadiometer (SECA, Chino, CA, USA) on the first test day meeting. After fasting blood sample collection, participants consumed one of the three test meal options within 5–10 min under researcher supervision. Meal consumption duration was not significantly different between treatments.
Whole blood samples were collected at 30, 60, 90, and 120 min post-treatment by a trained phlebotomist for determination of glucose and insulin concentrations. Plasma glucose concentrations were assessed using the colorimetric glucose oxidase method (Sigma Diagnostics, St. Louis, MO, USA). Insulin concentrations in serum were determined utilizing the Immulite 1000 (Diagnostic Products Corporation, Los Angeles, CA, USA). Results for glucose and insulin are presented as net change from fasting values. Fasting glucose concentrations were not significantly different between treatment test days and values confirmed that participants were fasting. A portion of the first blood sample on the first study test date was sent to an outside lab (Sonora Quest, Tempe, AZ, USA) for analysis of hemoglobin, triglyceride, total cholesterol, low-density lipoprotein (LDL), high-density lipoprotein (HDL), and very-low-density lipoprotein (VLDL). Hemoglobin was assessed to evaluate the presence or absence of iron deficiency anemia and lipid profiles were evaluated to provide information on risk factors for metabolic syndrome and heart disease.

Participants received the three test meals in random order. Bean treatment meals were composed of a 1/2 cup of plain black beans or chickpeas (Bush Brothers & Company, Knoxville, TN, USA) and 15 g of brine from the canned beans (added for flavor) along with 1/2 cup of plain steamed long grain white rice (Great Value, Bentonville, AR, USA). The control meal contained 3/4 cup of the same white rice. The mean glycemic index (GI) value of long grain rice was found to be 80 ± 3 across ten studies and it is considered to be a high-GI food [31,42]. Nutrient composition of test meals is shown in Table 1. Each meal provided 50 g of available carbohydrate, which was calculated as the difference between the dietary fiber and total carbohydrate values presented on the manufacturer’s nutrition facts label [43,44,45]. Fifty grams of carbohydrate is a standard quantity used to test glucose response among persons with and without type 2 diabetes [46,47,48]. White rice was prepared in an electric automatic rice cooker based on the manufacturer’s instructions (RC400; Black & Decker, Miami Lakes, FL, USA). Dry rice weight and water volume were standardized to gram weights for preparation consistency. Proportions of 945 g of bottled drinking water was added to 420 g of dry white rice and steamed for ~30 min in the rice cooker. The canned beans were drained, but not rinsed, and heated in a microwave for 1 min at medium power. The test meal was prepared by weighing out the cooked rice, then adding the appropriate weight of warmed beans, and 15 g of the drained can liquid for moisture. A digital food scale was used for gram weight determination, and was tared after the addition of each food item (Salter, Fairmont, MN, USA).

Timepoint differences between fasting and post-treatment glucose and insulin concentrations were determined (Figure 1 and Figure 2) and incremental area under the curve (iAUC) calculations were completed using the trapezoidal rule (Figure 3 and Figure 4) [49]. The iAUC for blood glucose and insulin were assessed between 0–60 and 0–120 min postprandial for all participants. Multivariate analysis of variance (MANOVA) for repeated measures with time and diet as factors was used to evaluate differences in glucose and insulin measures between the three meal treatments. Following a significant MANOVA, paired t tests were used to identify differences between specific bean treatments and the rice control. All continuous variable data are reported as mean ± standard error. SPSS Statistics software version 24.0 (IBM Corporation, Somers, NY, USA) was used for statistical analyses. A priori power analysis at 80% power with an effect size of 0.5 for MANOVA repeated measures between factors indicated that a sample size of 12 individuals were required [50]. The level of significance was p ≤ 0.05.

Descriptive statistics for the 12 participants at study entry are shown in Table 2. All participants self-identified as Caucasian and two identified as having Hispanic ethnicity. Body weight and body mass index (BMI) did not significantly differ between test days (data not shown). Mean BMI was within the normal range. Two participants were classified as overweight. Mean lipid concentrations were in the optimal ranges [51]. One participant displayed an elevated total cholesterol concentration of 267 mg/dL. The participant’s HDL cholesterol was also high, indicating a total cholesterol/HDL ratio of 4.0, which was considered acceptable by recommendations at the time of data collection [49]. None of the women were classified as anemic (hemoglobin <12 g/dL) [52].

Legumes are culturally meaningful foods with numerous health benefits. In the present study, whole black bean and chickpea consumption in combination with white rice, a high glycemic index food, significantly reduced glycemic response in comparison to a white rice control among healthy adult women. Bean treatments were provided in a quantity (1/2 cup) recommended by the 2015 Dietary Guidelines for Americans. Findings have important implications for dietary guidance and retention of traditional food combinations by immigrants, native born US individuals, and others globally.

The authors thank the participants and staff member Carmen Febus, who contributed their time and efforts to the success of this project. 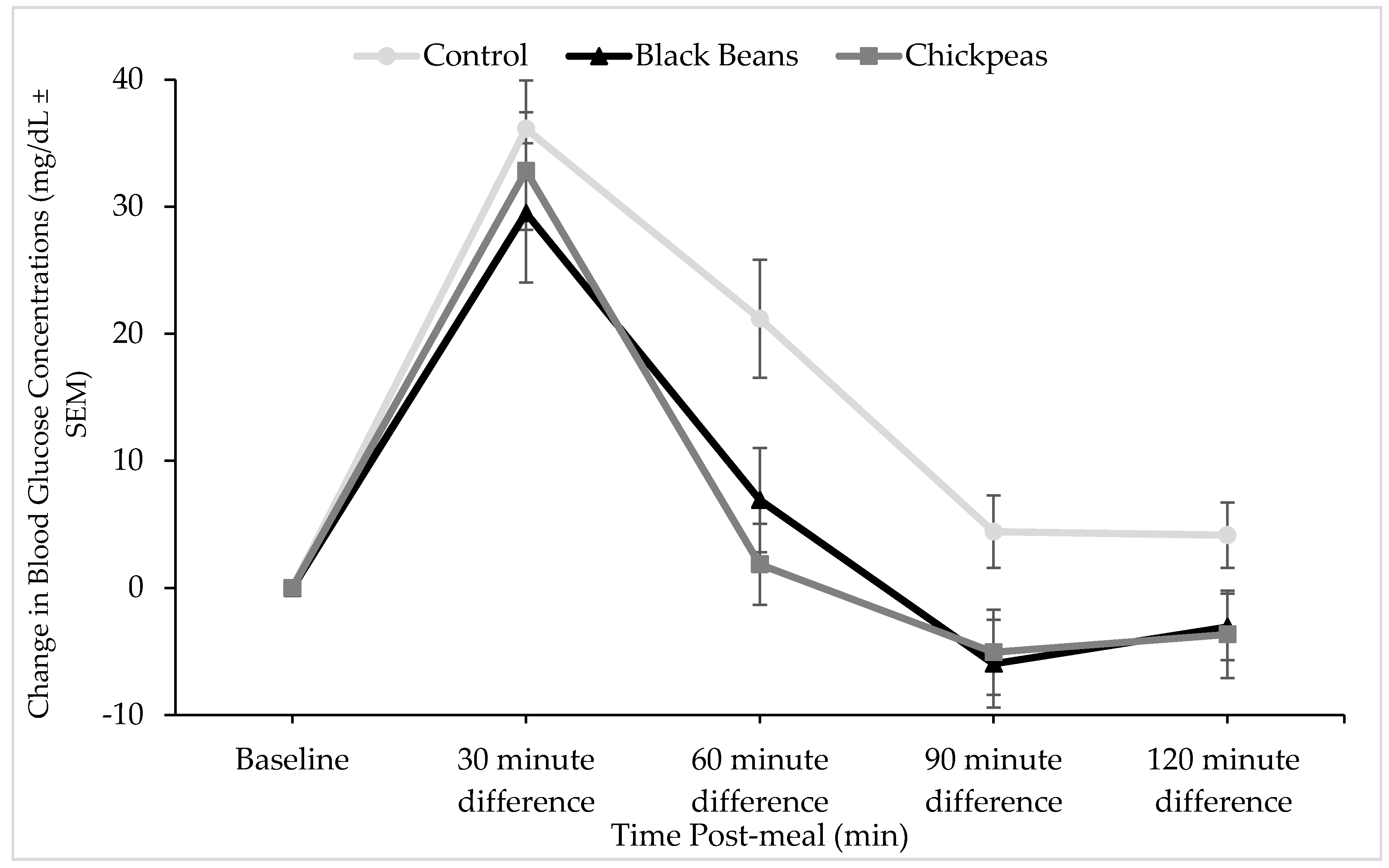 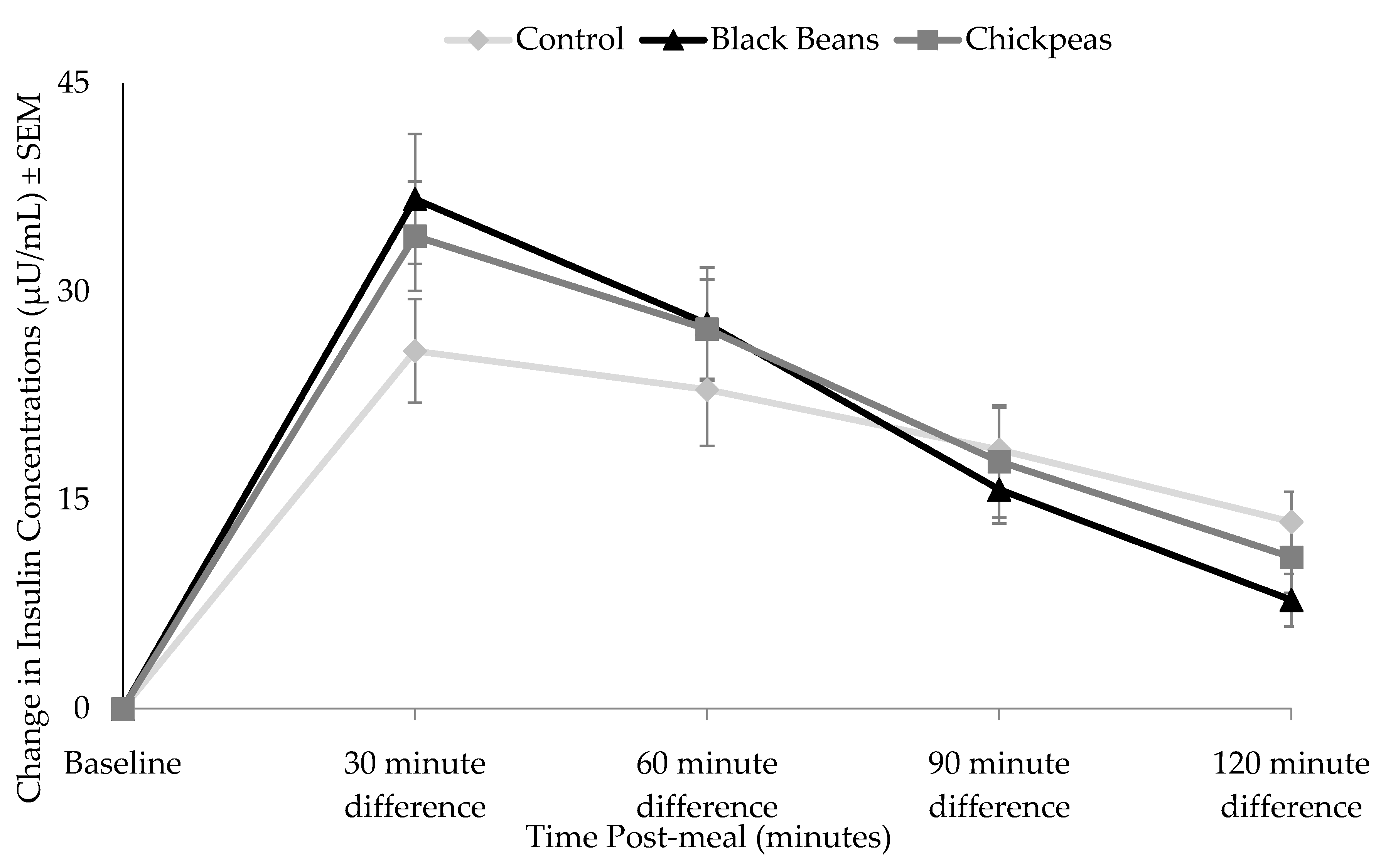 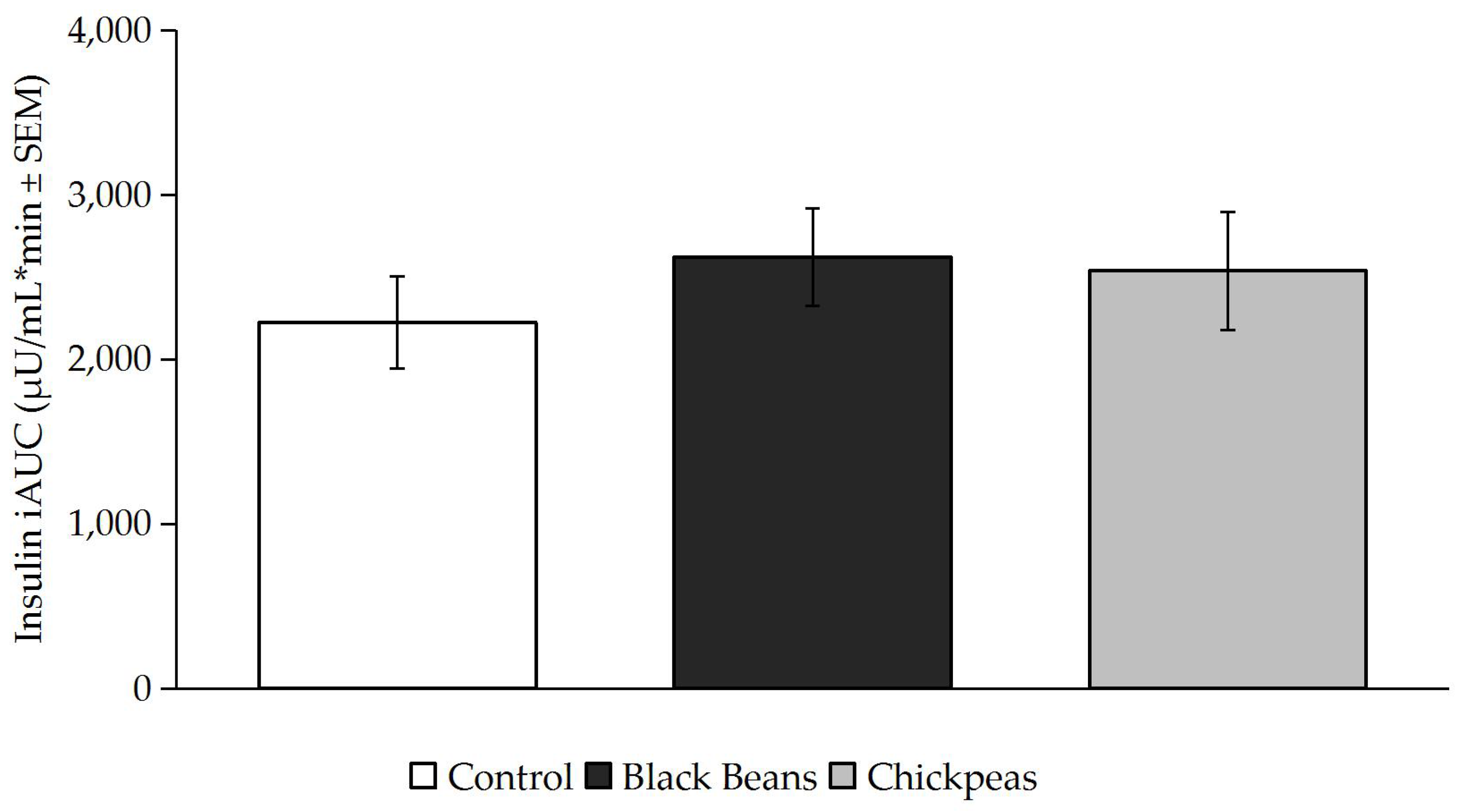