We compared the relative validity of nutrient intakes derived from Internet website dish-based dietary records (WDDRs) and weighed dietary records (DRs). The study participants were 218 registered users of a dietary management website. After excluding 55 participants, a total of 163 participants were included in the final analyses. The participants were Japanese women, and their mean age and mean body mass index (BMI) were 39.3 (±10.3) years and 22.3 (±3.7) years, respectively. We compared differences in the DR and WDDR with respect to intakes of energy and 13 nutrients. The median values for the intake of protein and seven nutrients showed no significant difference between the DR and WDDR, and the estimated values were generally similar. The interquartile range of nutrients with a significant difference did not show a large deviation, with the exception of vitamin A. Correlation coefficients showed a strong correlation of 0.7, with the exception of sodium and vitamin E. The kappa coefficients for energy and for some nutrients were good to fair. Using Bland–Altman plots, we found proportional errors in the intake values for vitamins and minerals. We could not confirm obvious systematic errors for energy, protein, fat, or carbohydrate intake. WDDR use is considered to be a valid method for estimating energy and nutrient intakes among Japanese women. View Full-Text
Keywords: web; Internet; validity; nutrient intakes; dish-based dietary record web; Internet; validity; nutrient intakes; dish-based dietary record
►▼ Show Figures 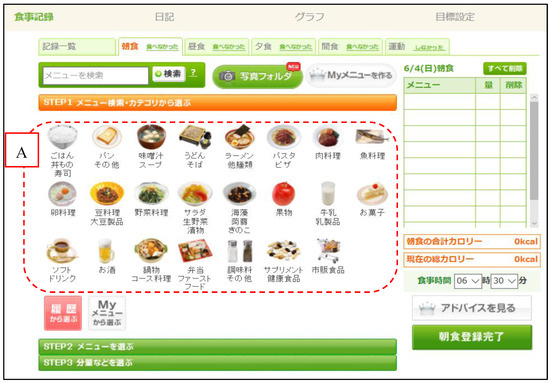